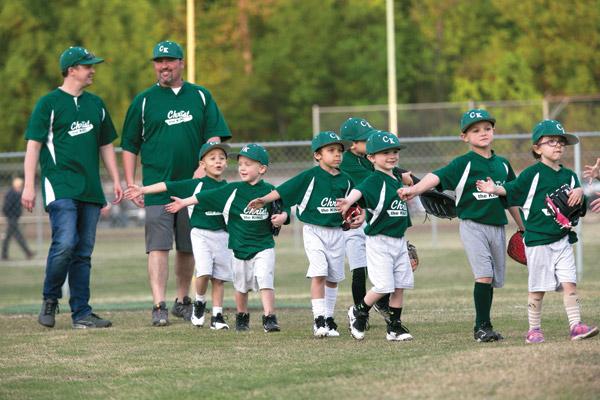 Karen Schwartz
Christ the King teeball players and coaches line up for a post-game handshake. The Fort Smith parish, along with St. Boniface and Immaculate Concep-tion parishes, are longtime members of the Fort Smith Church League baseball program.

Karen Schwartz
Christ the King teeball players and coaches line up for a post-game handshake. The Fort Smith parish, along with St. Boniface and Immaculate Concep-tion parishes, are longtime members of the Fort Smith Church League baseball program.

There are few things that are as constant in Rodney Woods’ life than Immaculate Conception Church and School in Fort Smith.

“When my grandkids first got old enough to go to school, my kids chose for them to go to Immaculate Conception just like my older brother and my mom and dad, as the fourth generation now. I’m very sentimental on things like that,” he said.

“It really brings a smile to my face to think that me and my brother were out here not too many years ago doing the same thing and now my grandkids are going to the same church, same school, the same organization and same activities. It means a lot to me.”

Woods serves as IC’s commissioner and the second vice president of the Fort Smith Church Baseball League, a group that has been providing youngsters a chance to play America’s game for more than six decades. Like a lot of people who grew up here, Woods’ experience with the league started as a player and evolved with time and generations.

“Did coaching and then got into being a commissioner. I’ve been second vice president. I’ve been league president,” he said. “I really was just going to be a grandpa and try to not coach and not do anything but that didn’t last long.”

The league grew out of one man’s desire to make baseball accessible to any child who wanted to play, Dr. Ted Skokos, a local dentist and member of First United Methodist Church there. Skokos died last year at the age of 96.

“The Boys Club didn’t have enough room for all the kids that wanted to play,” said Don Eveld, sitting league president and member of Christ the King Church in Fort Smith. “From what I understand, the guy that was the head of the Boys Club talked to Dr. Skokos about starting another league. That’s kind of where the church league came from.”

The league debuted in the mid-1950s, a modest one-church operation that would soon catch on citywide. In less than a decade, the league was fielding 60 teams from eight local houses of worship. Almost from the beginning the Catholic community was part of the activities.

“First Methodist Church, back in I think ‘54, started the youth baseball thing and they had like three or four teams,” Eveld said. “In the next year or two, they added two churches; St. Boniface (Catholic) Church was one of them and I think St. Paul Methodist was another one.”

At its peak, the co-ed league fielded more than 100 teams and even as local traveling youth baseball teams have siphoned off some players, the league still draws impressive numbers. This season, almost 80 teams sponsored by 16 churches and made up of more than 900 kids took the field across the league’s nine age divisions.

“A lot of it is tradition,” he said. “A lot of the parents have played and they want their kids to play. There’s travel ball and everything that kids can go do or basketball, different things, but it’s tradition.”

“You know, travel baseball will stretch from March to July and we’re talking early March, so you start practicing in January. You’re going everywhere, you’re going all over. This league gives the parents the option to stay in town and they’ll get anywhere from 15 to 25 games. You play two nights a week, you’re home; you’re not traveling, you’re not spending money out of town. Talking to people, that’s the biggest thing,” McKinney said.

The church league is also a study in ecumenical unity. No youngster, boy or girl, is denied the chance to play; if their home church doesn’t have a team in their age bracket, they’re just directed to a church that does. Same with kids whose families don’t have a church or whose church isn’t a member of the league. Thus, is it not uncommon that Baptists bat, Catholics catch and Presbyterians pitch for the same squad.

“We play Monday through Friday, but we have several churches, especially the Baptist churches, they don’t allow their teams to play on Wednesday night,” Eveld said with a big chuckle. “So it’s kind of Wednesday is the Catholic and Methodist league night. As long as I can remember it’s been that way.”

The league wraps up its season at the end of June with a tournament and a Trophy Night, but the impact of the league is on display year around. Over the years the league has built eight baseball fields for the city; a lasting testament to be sure, but nothing close to what it has created in the generations of kids who have run the bases.

“It’s God’s plan of being together with your soulmates and it teaches respect for your adults; we hope that it does. And, it’s something to do in the summer while school is out. It basically keeps them all together,” Woods said. “It’s just the camaraderie of being with your classmates and church mates and wanting to compete and having a good time at it.”