Pope Francis orders revision to the Catechism of the Catholic Church 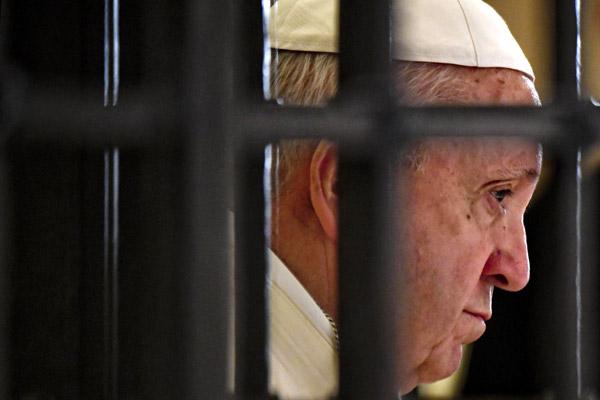 CNS / Ciro Fusco, EPA
Pope Francis prays in the crypt of the Basilica of St. Nicholas during a meeting with the heads of Christian churches in the Middle East in Bari, Italy, July 7. The pope has ordered a revision to the catechism to state that the death penalty is inadmissible and he committed the church to its abolition.

CNS / Ciro Fusco, EPA
Pope Francis prays in the crypt of the Basilica of St. Nicholas during a meeting with the heads of Christian churches in the Middle East in Bari, Italy, July 7. The pope has ordered a revision to the catechism to state that the death penalty is inadmissible and he committed the church to its abolition.

VATICAN CITY -- Building on the development of Catholic Church teaching against capital punishment, Pope Francis has ordered a revision of the Catechism of the Catholic Church to assert "the death penalty is inadmissible because it is an attack on the inviolability and dignity of the person" and to commit the church to working toward its abolition worldwide.

The catechism's paragraph on capital punishment, 2267, already had been updated by St. John Paul II in 1997 to strengthen its skepticism about the need to use the death penalty in the modern world and, particularly, to affirm the importance of protecting all human life.

Announcing the change Aug. 2, Cardinal Luis Ladaria, prefect of the Congregation for the Doctrine of the Faith, said, "The new text, following in the footsteps of the teaching of John Paul II in 'Evangelium Vitae,' affirms that ending the life of a criminal as punishment for a crime is inadmissible because it attacks the dignity of the person, a dignity that is not lost even after having committed the most serious crimes."

"Evangelium Vitae" ("The Gospel of Life") was St. John Paul's 1995 encyclical on the dignity and sacredness of all human life. The encyclical led to an updating of the Catechism of the Catholic Church, which he originally promulgated in 1992 and which recognized "the right and duty of legitimate public authority to punish malefactors by means of penalties commensurate with the gravity of the crime, not excluding, in cases of extreme gravity, the death penalty."

At the same time, the original version of the catechism still urged the use of "bloodless means" when possible to punish criminals and protect citizens.

The catechism now will read: "Recourse to the death penalty on the part of legitimate authority, following a fair trial, was long considered an appropriate response to the gravity of certain crimes and an acceptable, albeit extreme, means of safeguarding the common good.
"Today, however, there is an increasing awareness that the dignity of the person is not lost even after the commission of very serious crimes. In addition, a new understanding has emerged of the significance of penal sanctions imposed by the state. Lastly, more effective systems of detention have been developed, which ensure the due protection of citizens but, at the same time, do not definitively deprive the guilty of the possibility of redemption," the new section continues.

Pope Francis' change to the text concludes: "Consequently, the church teaches, in the light of the Gospel, that 'the death penalty is inadmissible because it is an attack on the inviolability and dignity of the person,' and she works with determination for its abolition worldwide."

In his statement, Cardinal Ladaria noted how St. John Paul, retired Pope Benedict XVI and Pope Francis had all spoken out against capital punishment and appealed for clemency for death-row inmates on numerous occasions.

The development of church doctrine away from seeing the death penalty as a possibly legitimate punishment for the most serious crimes, the cardinal said, "centers principally on the clearer awareness of the church for the respect due to every human life. Along this line, John Paul II affirmed: 'Not even a murderer loses his personal dignity, and God himself pledges to guarantee this.'"

Pope Francis specifically requested the change to the catechism in October during a speech at the Vatican commemorating the 25th anniversary of the text's promulgation.

The death penalty, no matter how it is carried out, he had said, "is, in itself, contrary to the Gospel, because a decision is voluntarily made to suppress a human life, which is always sacred in the eyes of the Creator and of whom, in the last analysis, only God can be the true judge and guarantor."

Cardinal Ladaria also noted that the popes were not the only Catholics to become increasingly aware of how the modern use of the death penalty conflicted with church teaching on the dignity of human life; the same position, he said, has been "expressed ever more widely in the teaching of pastors and in the sensibility of the people of God."

In particular, he said, Catholic opposition to the death penalty is based on an "understanding that the dignity of a person is not lost even after committing the most serious crimes," a deeper understanding that criminal penalties should aim at the rehabilitation of the criminal and a recognition that governments have the ability to detain criminals effectively, thereby protecting their citizens.

The cardinal's note also cited a letter Pope Francis wrote in 2015 to the International Commission Against the Death Penalty. In the letter, the pope called capital punishment "cruel, inhumane and degrading" and said it "does not bring justice to the victims, but only foments revenge."

Furthermore, in a modern "state of law, the death penalty represents a failure" because it obliges the state to kill in the name of justice, the pope had written. On the other hand, he said, it is a method frequently used by "totalitarian regimes and fanatical groups" to do away with "political dissidents, minorities" and any other person deemed a threat to their power and to their goals.

In addition, Pope Francis noted that "human justice is imperfect" and said the death penalty loses all legitimacy in penal systems where judicial error is possible.

"The new formulation of number 2267 of the Catechism of the Catholic Church," Cardinal Ladaria said, "desires to give energy to a movement toward a decisive commitment to favor a mentality that recognizes the dignity of every human life and, in respectful dialogue with civil authorities, to encourage the creation of conditions that allow for the elimination of the death penalty where it is still in effect."