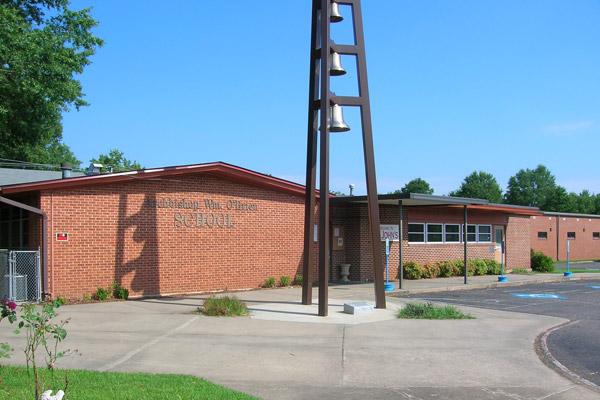 Arkansas Catholic file
St. John School in Russellville is one of nine Catholic schools in the Diocese of Little Rock to receive funding for ACE scholarships to help new students start attending.

Arkansas Catholic file
St. John School in Russellville is one of nine Catholic schools in the Diocese of Little Rock to receive funding for ACE scholarships to help new students start attending.

Being able to offer more scholarships for students in need is a goal of the Catholic Schools of Arkansas.

Thanks to ACE Scholarships, based in Denver, the dream is being met with 130 new scholarships, totaling about $250,000 a year.

Nine Catholic schools in Arkansas will have between 10 and 20 scholarships to offer to low-income students this fall. Eighty percent will be directed to kindergarteners or new families in the schools while the remaining can be given to existing families.

“We have families inquiring … but (they say) ‘I am not able to pay.’ With the ACE scholarships, that sealed the deal.” Kristy Dunn, principal at St. Theresa School in Little Rock

Its “mission is to provide children of low-income families with scholarships to private schools in grades K-12 and to advocate for expanded school choice,” according to ACE.

The number of scholarships for each school is based on their unmet financial needs as well as the school’s ability to accept more students.

The schools receiving scholarships are:

• Tontitown: Ozark Catholic Academy was added to the list recently, but it is not clear at press time how many scholarships it will have.

Overall, ACE will offer 300 scholarships this school year to 30 private schools in Arkansas.

Each partial scholarship is worth up $2,000 in elementary schools or $3,000 in high schools, or half the school’s tuition. It is payable directly to the school where the child has already been accepted. Catholic families might be able to get other scholarship money through the parish or school in addition to ACE, but all families must pay some amount for their tuition. The average elementary school tuition in Arkansas Catholic schools for a Catholic student is $3,711 annually, according to 2017 statistics provided by the Catholic Schools Office.

ACE schools have identified families who meet the income requirements for the federal Free and Reduced Lunch Program and have inquired about financial assistance. The families must fill out an ACE application and provide a recent tax return to be considered. The families also have to give consent for ACE to track their children’s progress and report anonymously this data to donors. Donors also can request to tour ACE schools.

Oliver said the decision to start offering scholarships in Arkansas happened because it had a donor very concerned about education in Arkansas, particularly the public schools in Little Rock.

Kristy Dunn, principal at St. Theresa School in Little Rock, said, “It is helping with our growth … We have families inquiring … but (they say) I am not able to pay. With the ACE scholarships, that sealed the deal.”

“It is another advocacy group for school choice,” she said “We are taking baby steps toward school choice (in Arkansas).”

Marguerite Olberts, an associate superintendent for Catholic schools, said the diocese is blessed to be able to offer ACE scholarships now.

In the fall of 2019 it is expected that Catholic schools will have more scholarships through ACE to offer to new families, Oliver said.

“ACE knows there are seats that need to be filled and give parents a choice in their child’s education to send them to the best school for that child,” Olberts said. “They believe that we have a proven track record of success, especially students from low-income families.”