Personal involvement made all the difference 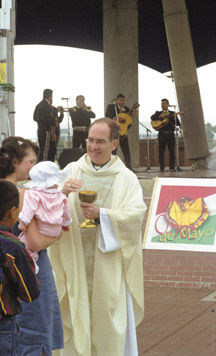 Arkansas Catholic file
Bishop Sartain blesses a baby during an outdoor Mass at the Riverfront Amphitheater in Little Rock as part of the Cinco de Mayo celebration in 2002.

Arkansas Catholic file
Bishop Sartain blesses a baby during an outdoor Mass at the Riverfront Amphitheater in Little Rock as part of the Cinco de Mayo celebration in 2002.

First and foremost, Bishop J. Peter Sartain learned to speak Spanish. He learned about the culture as well. In the past six years, he went on at least four trips to Mexico, including leading an eight-day pilgrimage for the diocese in 2004.

Continuing the effort started by Bishop Andrew J. McDonald, Bishop Sartain brought in priests and religious to serve the ever-growing Hispanic population, which came to Arkansas in record numbers in the 1990s.

Among others, Bishop Sartain dedicated new parishes in Glenwood and Danville, which were started by Hispanic immigrants. He also ordained a Mexican-born priest and deacon and envisioned a plan to nurture more leaders from within the Hispanic community.

And most recently, he took a stand with other U.S. bishops in asking for immigration reform.

Of all the things he did to minister to Hispanics in the Diocese of Little Rock, many agree breaking the language barrier had the greatest impact on making the diocese's immigrant members feel at home.

"The people were very, very grateful for that because they felt they could communicate directly with him," said Sister Mickey Espinoza, MCP, former diocesan director of Hispanic ministry.

Hispanics feel "truly at home in our diocese," said Sheila Gomez, director of Catholic Charities of Arkansas. "They are an integral part of the Church due to the bishop's leadership."

"Everybody has seen his intentions were to keep one Church, to build just one Church," Deacon Marcelino Luna said. "He has been truly a pastor of the flock."

Bishop Sartain ordained Luna in December 2002 and later named him diocesan director of Hispanic ministry in 2005.

Father John Antony, pastor of St. Raphael Church in Springdale, said the bishop treats everyone with the same honor and respect.

"When Bishop Sartain listens to you, you feel like you're the only person in the world," he said. "He demonstrates this same loving attention and concern for our Hispanic Catholics."

When Masses have been celebrated on a statewide scale, they always include at least two languages. It is a tradition that began with Bishop McDonald and has continued with Bishop Sartain. At the Eucharistic Congress Mass in October 2005, the bishop gave his homily in English and Spanish. The readings were proclaimed in English, Spanish, and Vietnamese.

"It's very evident that Bishop Sartain is a pastor at heart, he loves all his flock, whether they speak English or Spanish or Vietnamese or even Malayalam," Father Antony said.

Gomez said the bishop's desire to learn Spanish was evident from the day his appointment was made public six years ago at St. John Center in Little Rock.

After the announcement on Jan. 4, 2000, she said she met the bishop with Msgr. Friend. At the time she was head of Catholic Immigration Services and Msgr. Friend was director of Hispanic ministry. After they introduced themselves to then-Father Sartain, the first thing he said to them was that he wanted to learn Spanish. In August 2001 he did.

"It was a crash course, which gave me a jump start and was very helpful. I had one-on-one tutoring the entire time," the bishop said.

Before coming to Arkansas he had little or no experience working in Hispanic ministry. Now the bishop said he can speak simple phrases and sentences spontaneously and communicate with parishioners after Spanish Masses. "I am a long way from preaching without my notes," he said.

For those who admire his courage to learn, they are far less critical of his technique.

"When he got here, I personally wondered if he would be able to remember Spanish names as well as English names, but of course, he could," Father Antony said. "His Spanish is flawless, except when he says 'casa,' which sounds suspiciously Italian."

Interesting, considering that the bishop learned Italian while studying in Rome.

"As the years went on, you could tell that he was getting better at it, more fluent and when he listened to them he was able to respond also," said Sister Mickey, who now directs Hispanic ministry for young adults in the Diocese of Dallas. She was Hispanic ministry director in Arkansas from 2001 to 2005.

The bishop learned Spanish from his heart and that is the best way to learn any language, said Msgr. Friend, who has ministered to Hispanics in Arkansas for the past 17 years.

"He did it from his heart because he loved the people of the diocese and he desired to be able to talk to them in the language that they talk to God in," he said. "It's easier to learn with your heart because then the Holy Spirit can fill in the gaps."

Father Antony said he learned to speak Spanish in 1995 through a full immersion program he took while in the seminary.

The former vocations director said Bishop Sartain continued to stress the need for priests and seminarians to learn Spanish.

"Fluency in Spanish, at least to celebrate Mass and hear confessions, is virtually a requirement for seminarians in Arkansas," he said.

Gomez said the bishop's inclusive leadership has also challenged the diocesan offices to do the same.

She said Arkansas Catholic en Español is a good example of this.

"I think it was important for him to be a part of that with his column in Spanish," she said. "Because that's another way to communicate with the people."

Gomez was appointed director of Catholic Charities of Arkansas in 2001 by Bishop Sartain. She said in the past six years her office's staff and outreach has grown with the bishop's support.

His stand on immigration reform has been clearly demonstrated in recent months.

In April an estimated 4,000 people attended a rally on the steps of the State Capitol as part of the National Day of Action for Immigrant Justice. Catholic Charities of Arkansas was one of the sponsors.

Gomez read a statement from Bishop Sartain, who was unable to attend.

She said Bishop Sartain's stand, supporting the U.S. Bishops' Justice for Immigrants campaign, makes her "very proud to be Catholic."

"The Catholic Church has been one of the leaders in Arkansas and nationwide in immigration reform," she said.

Gomez also read a statement for Bishop Sartain in September 2003 when the Immigrant Workers Freedom Ride came to Central High School in Little Rock. The event highlighted the struggles of immigrant workers.

"He stressed in his statement respecting the human dignity of all persons," Gomez said. This was consistent with his message through the years that "every person, no matter what their national origin, they have God-given self-worth."

"He had done a lot for Hispanic ministry," Msgr. Friend said. "The reality began to change with Bishop McDonald."

By learning to speak Spanish, Msgr. Friend said Bishop Sartain was able to go a step further and get personally involved.

Msgr. Friend said Bishop Sartain told him that he talked with Juan Manjarrez, a Mexican-born seminarian studying for the Little Rock diocese. As a result, "Juan said he began to think of himself less as an immigrant and more as a disciple.

"That really expresses well to me what happened with the Hispanic community through Bishop Sartain's time here," Msgr. Friend said. "He called them to not be immigrants or guests here but to be disciples, members of the Church of Arkansas."

Using another example, Msgr. Friend said he went with Bishop Sartain to celebrate Mass on feast of Our Lady of Guadalupe for Hispanic inmates at Forrest City's Federal Correctional Institution in 2000.

All the inmates wanted a photo and Bishop Sartain "took pictures for at least an hour and he patiently bore that," he said.

Father Antony said the bishop's presence has been key.

"I'm almost afraid to ask how many miles he has put on his car in the past six years," he said. "He makes every effort to be present in parishes for significant parish events, and when he cannot be present, he no doubt remembers us in his prayers."

Sister Mickey said the bishop's attendance at the annual Encuentro Hispano was so important. He also played a vital role in inviting Auxiliary Bishop Gustavo Rodriguez Vega from the Archdiocese of Monterrey, Mexico, to the Encuentro in 2003.

"To stay there and listen to what the people had to say to him and stay for blessings and picture taking and just stay there all day with them was also something that impressed the people," she said.

Bishop Sartain was concerned about the parishes with a fast-growing Hispanic population so he continued to find priests who could minister to them, Sister Mickey said.

"He went down and thanked them and continued to get priests from there," he said.

Priests have also come from the Mexican dioceses of Tlaxcala and Parral because of personal visits from Bishop Sartain.

Several others have been asked, which might lead to priests from those dioceses as well in the future, Msgr. Friend said.

"Those dioceses wouldn't send priests here if they didn't know that the bishop was committed to working with the people," he said. "That's what sold those bishops on letting us have these guys.

And Hispanic religious sisters in Arkansas have increased as well. The Missionary Carmelites of St. Teresa made a permanent commitment to the diocese by moving their postulancy program from Houston to St. Barbara Parish in De Queen in January 2001.

"In deciding to move the postulancy to Arkansas, Sister Olivia (Hernandez) said, 'I think we considered the support the bishop has offered. He not only welcomed us, but he offered to help us.'" (Feb. 17, 2001, issue of Arkansas Catholic)

"They brought another group into Springdale," Msgr. Friend said. "They made a big commitment here to Arkansas."

Currently, about a dozen Carmelite sisters and postulants are in the diocese. Other orders serving Hispanics include the Missionary Catechists of the Poor and Missionary Sisters of the Sacred Heart.

"He is encouraging our own sisters here in Arkansas to be aware of and to consider ministering to the Hispanic community" as well, Msgr. Friend said of Bishop Sartain.

Currently, there are six Hispanic diocesan seminarians, and plans to form a Hispanic diaconate class are also being discussed.

"It was a great need because of the lack of priests that could speak Spanish," she said.

At the recent Gran Ultreya (reunion of Hispanic Cursillistas) held at St. John Center on May 27, the bishop celebrated the Mass for about 100 people. Several expressed their gratitude to Bishop Sartain at the close of Mass, Luna said.

"We didn't have the time for the people to express that to him on the diocesan level. If we would have had that, it would have been a powerful thing," he said. "It would take hours."

A friend and Mexican native who is now a U.S. citizen told him it's hard to lose Bishop Sartain because "'he's going and we knew he supported us and we don't know now if that's going to continue.'"

Luna said the bishop has been a great leader.

"We're really going to miss him, but he has planted the seeds and we will continue to nurture them and just wait for the next one and see what God sends us," he said.

Click here for the index of stories about Bishop J. Peter Sartain's six years in Arkansas. For the complete report, see the June 24, 2006 print edition of Arkansas Catholic.