St. Luke Church in Warren will be the first mission to benefit from new program 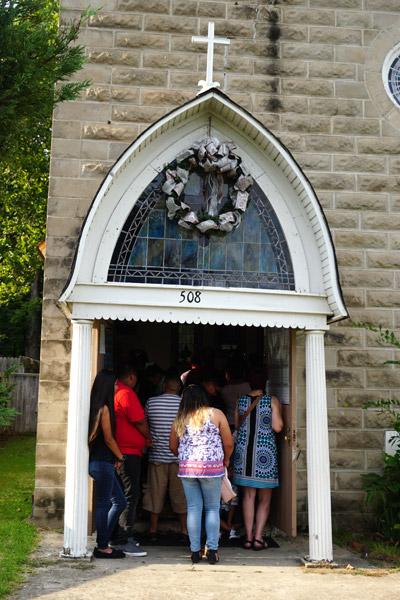 With the launch of a new initiative called One Church, the Diocese of Little Rock is concentrating its effort on in-state mission work as a way to help the larger Catholic community.

From September to August each year Catholic Charities will oversee the support given to a rural mission church that needs a short-term boost to become a thriving community. The first church partner is St. Luke Church in Warren. All money given to One Church: Unite Arkansas in Faith and Mission will go to the Warren church for the next 12 months.

“I hope this develops a tradition of in-state mission service among all of our parishes,” said Patrick Gallaher, executive director of Catholic Charities of Arkansas. “Our parishes can help each other.”

While St. Luke Church is bursting out of its 175-seat church, it has plans to begin renovation of the former farmers’ co-op in town. The 10 acres and large building will allow the church to expand seating for its church and rooms for faith formation as well as allow the church to have its own parish hall, offices and parking lot.

“We get very close during Mass. We have kids stacked up on kids, on laps of other kids. It’s sort of a pyramid going on.” Father Edward D’Almeida

Currently, the mission has one Sunday night Mass each week in Spanish. Parishioners who arrive later have to stand in the doorway or in the sacristy next to the altar during Mass. The former rectory has enough room for only two faith formation classes at a time. Baptism classes are held after Mass inside the church. When the parish holds a parish dinner after Mass to raise money for their capital campaign, they have to hold it on the lawn since they don’t have a parish hall. They must park in a store parking lot and walk across a busy street to Mass.

Pastor Father Edward D’Almeida said the parish has hosted fundraising dinners and raffles for many years in order to buy and renovate a new church. He said the parish capital campaign, which was launched this summer, has a goal of $500,000. He said with 60 families reaching the goal is possible if every family agreed to donate $5 a day, $35 a week, for four years.

The initial plan is for the mission to renovate the warehouse space for a sanctuary and add office space and several classrooms. If funding is available, the renovation can be completed with a parish hall and soccer fields.

“The community is now 100 percent Hispanic,” the priest said. “It is an older community. Their children have grown up here and stayed here.”

Referring to the small size of the church building, he said with a laugh, “We get very close during Mass. We have kids stacked up on kids, on laps of other kids. It’s sort of a pyramid going on.”

Margarita Vargas, 73, said she and her husband Juan arrived in Warren 40 years ago.

“There were no Mexican people when we came,” she said. “Only me and my husband.”

Over the past few years parish enrollment has grown.

“The church is bigger,” she said. “Now it is tight and it is so hot. It’s a lot of people. Every Sunday it is so full.”

While some mission partners might need construction materials and labor for expansions or renovations, support for St. Luke Church in Warren is primarily funding for their capital campaign. Smaller landscaping and interior finishing jobs might be available later in the project, Gallaher said.

“I know other parishes are involved. I would like to see parishes that are interested but can’t find targets for their mission work to ask Catholic Charities to coordinates these things,” he said. “This is the first time we have coordinated our focus on a single parish. I want to bring the circumstances at St. Luke’s to clear visibility for all to see.”

Gallaher said promotion of One Church is flexible for each parish. A letter from Bishop Anthony B. Taylor was supposed to have been read at all Masses Sept. 29-30. While some parishes might hold a second collection for One Church, others might donate all their proceeds from a fundraiser, such as a bake sale or car wash, to the Warren church.

Gallaher, St. Luke parishioners and the current and former pastors can also be invited to speak at Masses or to parish groups about St. Luke Church and its needs.

The diocese’s council of priests, the Presbyteral Council, created the One Church program last year and chose St. Luke to be the first partner. For the 2019-2020 year, the council has already selected Holy Spirit Church in Hamburg.

One Church partners with Hamburg church to pay off debt