The parish on Catholic Hill is thriving 150 years later 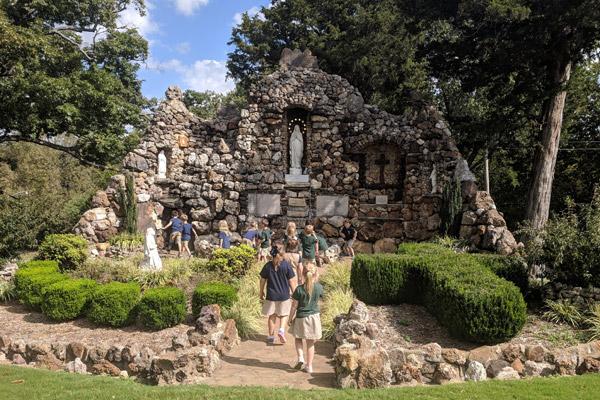 Maria Dickson, St. Paul School
St. Paul School kindergarteners in Pocahontas visit the parish’s Marian Grotto that was built in 1934. The parish is celebrating its 150-year anniversary with an old-fashioned picnic on the lawn Oct. 21.

Maria Dickson, St. Paul School
St. Paul School kindergarteners in Pocahontas visit the parish’s Marian Grotto that was built in 1934. The parish is celebrating its 150-year anniversary with an old-fashioned picnic on the lawn Oct. 21.

The Marian Grotto at St. Paul Church in Pocahontas was built in 1934 during the Great Depression. Joe Schmidt designed and helped construct the grotto and his name is engraved on the shrine, according to a 2002 Arkansas Catholic article.

“They didn’t have work, so they started that project,” said parishioner Tom Barre. “Golly, these immigrant guys were used to rock work and stone work. They put that thing up and it was really beautiful. They put it right where the original church was.”

Looking around the approximately 6,500-population town of Pocahontas, there are decades-established businesses and an agricultural legacy that has shaped Randolph County.

Though immigration has been woven into the American success story, it’s unique that a parish can directly impact the future of a city in the way that St. Paul Church in Pocahontas has done.

“When you look at the broad picture of America, the melting pot is what made it so strong and vibrant,” said longtime parishioner Tom Barre, whose family first settled in the area in 1874. “… I’m a firm believer that those families that came out of Europe they had all that background, historical background in their church life and family life and it strengthens us to live better when we are a product of these type of families. The Catholic tradition adds so much to our lives.”

On Sunday, Oct. 21 following the 10:30 a.m. Mass, St. Paul the Apostle Church will celebrate 150 years of existence in Pocahontas. Parishioners will celebrate with an old-fashioned picnic on the lawn and potluck, complete with musicians, a genealogy table and old photographs to share.

While life has evolved for the city, a constant has always been St. Paul Church.

The limestone church building is perched atop what is regarded as “Catholic Hill.” Like most stories of small town America, many of Pocahontas’ once-thriving downtown businesses are closed. They’ve moved East on Highway 67, leaving only a footprint of the past. But the Church has been a constant reminder of the strong and faith-filled history that immigrants built to last not only for Catholicism, but in agriculture and business.

The current parish, built with rocks from local quarries and donated labor, was dedicated in 1904, according to a parish history written by Barre. Though the architecture stands out in its brilliance, inside the sanctuary is home to a billowing pipe organ and the stained glass windows of the saints and apostles like Sts. Paul, Matthew, Mark, Luke and John, illuminated by God’s sunlight.

But long before the rocks were laid, a wooden church was built, dedicated by Bishop Edward Fitzgerald in 1868. Irish missionary priest Father James P. O’Kean visited the area and electrified locals with his “fiery preaching,” Barre wrote. His tenure was short, as he was then named rector of the Cathedral of St. Andrew in Little Rock in 1871.

In 1879, Father John Eugene Weibel, a Benedictine missionary from Switzerland, changed the course of the church’s legacy.

“He was something else,” Barre said. “It was tough back then, riding on the horse in the hot weather, cold weather, gosh almighty. He had a lot of sickness and he barely made it at times … he was tough … quite an evangelizer.”

While the key to modern evangelization is meeting people “where they are,” Father Weibel was practicing the notion decades ago, celebrating Mass, hearing confessions and taking up a collection for the parish from men working on the railroad.

“I remember that one story he got off his horse and sat down by a tree for several hours and he didn’t quite make it, but he got up and continued. There were several stories like that,” from when he suffered from illness, Barre said.

He began welcoming German immigrants who came with the wave of Northern Europeans in 1880, Barre wrote.

It was Father Weibel’s hope, according to a 2002 article about St. Paul’s history in Arkansas Catholic, that Randolph County would become a thriving German settlement locally and for the parish.

Barre said the priest addressed anti-Catholicism in his writings in a “diplomatic and low-key” way, not trying to argue with those who were close-minded. But in addition to religious tensions, there were anti-immigrant sentiments in those early decades.

“People got suspicious of them here in Pocahontas because they were German,” said Rita DeClerk Dust, who is a descendant of both the DeClerk and Baltz families who were original settlers.

On Dec. 13, 1887, the Olivetan Benedictine sisters arrived from Switzerland to begin a school, founded in 1880.

Despite widespread prejudice, they also started a school for black children, which lasted just a year or two. Because of harsh conditions and disease that caused many deaths, they eventually moved to begin Holy Angels Convent in Jonesboro. Sisters did stay behind to run the school, which is today run by lay people.

For people like parishioner Millie Wilson Thielemier, 86, early settlers’ choice of Pocahontas changed the course of their life. Her grandfather, Phillip Kiefer, helped to build the church and brought pears and grapes from Germany.

“There were old pear trees in this area called Kiefer pears,” she said. “He raised some tobacco. He twisted it somehow to conserve space … After he had died, some of our family was going through trunks and still found those twists of tobacco.”

German settlers were not only hated for their faith, but locals objected to their farming methods, accusing them of trying to ruin the land with fencing and plowing, according to the 2002 article. However, the efforts proved to be revolutionary and today, it’s still a farming community.

“I’m very proud of it,” Dust said of her family’s legacy. “The Baltz side came from Tennessee. Granddaddy (George) Baltz he hiked and walked here … he bought some land and farmed it. He left his wife and two oldest sons in Tennessee where they had been living.”

For both Thielemier and Dust, it was the school and parish life that created the fondest memories.

“We grew up in the Baltz family home, which is within a block from church and the convent was right by church,” Dust said, adding the sisters lived across the street. “They were our playmates and our best friends … that was just fun and we played on the church grounds.”

“We were playing on the playground, I was a scrawny little kid, I fell and hurt my knee,” she said and for about a week, “Sister Michael would carry me up the steps to the classroom” on the second floor of the school. “I just have the fondest of memories from that time in my life. I have lived a charmed life.”

Both Thielemier and Dust met their husbands in the church or school, both served in the military during World War II and led successful careers in the city.

“Our parents lived here and we helped take care of them in their later years,” Thielemier said. “… He built this house in 1956 and we moved in 1957. We lived here ever since then.”

“For me, it’s just that, it’s my family. Everybody there is like family to me,” Dust said of her love for the parish. “If they aren’t actually related to me, I’ve grown up with them, watched their kids get married and kids come. The church is growing right now; there’s a whole lot of new people here, I can’t say I know all of them anymore.”

When the current church was built, the community had about 100 families. Today, St. Paul has 898 parishioners, about 392 families. The parish still has its historical charm, but it’s coupled with modern touches — screens showing the homilies and readings during Mass and a contemporary band with guitars and drums playing praise and worship music for the 10:30 a.m. Mass on Sundays.

Shelly James, a second-grade teacher, grew up in Engelberg, but began attending St. Paul when she started teaching 18 years ago. She and her husband Travis have three children and said mixing the modern with the historic is important.

“It’s just a small-town parish that takes care of each other,” she said. “Everyone is close. I love that; it’s just a family. Everyone is willing to help out when needed; we have tons of prayer warriors you can call on at any time.”

The Marian Grotto at St. Paul Church in Pocahontas was built in 1934 during the Great Depression. Joe Schmidt designed and helped construct the grotto and his name is engraved on the shrine, according to a 2002 Arkansas Catholic article.

“They didn’t have work, so they started that project,” said parishioner Tom Barre. “Golly, these immigrant guys were used to rock work and stone work. They put that thing up and it was really beautiful. They put it right where the original church was.”

James is moved by the spirit in more ways than one