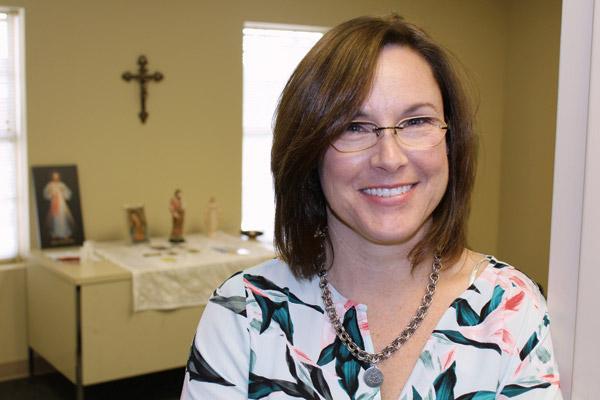 • What podcast would you recommend for ways to grow in spirituality or leadership?
The Father Mike Schmitz Catholic Podcast

Nicole Lashbrook knows a lot about leadership. As a West Point graduate and 10-year veteran of the U.S. Armed Forces, the Chicago native learned the finer points of mobilizing others from the very best.

As executive director of Arkansas Pregnancy Resource Center, she musters a different sort of troops, a team of 11 caring professionals who tend to a clientele at its most vulnerable.

“God puts things in your life to train you for something better, something different, all the time,” she said. “I think my military training helped me meet all different types of people in our community so that nothing really shocks me anymore. People are people.”

“When I see a client, I see a neighbor. I can’t imagine how Christ would see somebody, I can’t put myself at that level, but I think it is easy to see them as a peer. Everyone is a peer but just at a different stage of life.”

“God puts things in your life to train you for something better, something different, all the time.” Nicole Lashbrook

Lashbrook’s leadership skills were tested when earlier this spring, a fire completely destroyed APRC’s headquarters. She quickly set about the task of rebuilding while still delivering pregnancy testing and other services to women in the community who need it. She also mobilized donors and volunteers to not only rebuild, but move the mission of the organization forward, launching an entirely new set of ministries and services from a second location in Little Rock.

She said the secret to good leadership is to create an environment where each team member can exercise their strengths toward a common goal.

“My leadership philosophy is, you build your team, set a common goal and then trust your team to use the gifts God gave them to attain that goal,” she said. “I give them that freedom. I think if you micromanage, you lose the ability for them to use their gifts. So you have to set them free to do what God intends for them to do.”

Even though APRC enjoys support from a variety of faith communities, Lashbrook never fails to demonstrate her Catholic belief and traditions. Coworkers tell of her starting every day in prayer, the fuel that feeds the engine of this committed, faithful woman, doing work she was ordained to do.

“What I do is, I start every day with a rosary. I do adoration weekly,” she said. “You know, when you’re working for God, you have to put that first in everything, living your faith and bringing that to everyone you meet.”

• What podcast would you recommend for ways to grow in spirituality or leadership?
The Father Mike Schmitz Catholic Podcast