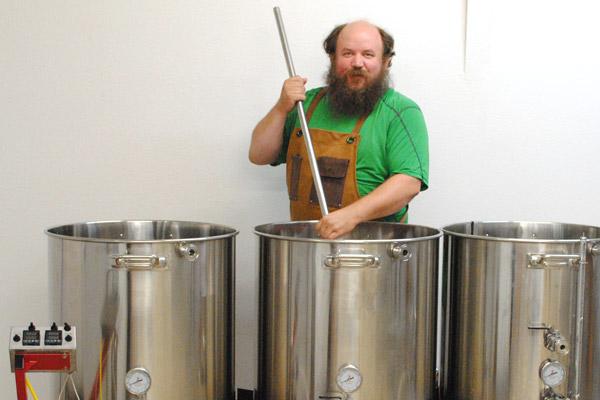 Bill Wright, Subiaco Abbey
Brother Basil Taylor, OSB, cooks up a batch of Abbey Amber at Subiaco Abbey’s new brewery and tasting room Sept. 25. The venture, 18 months in the making, opened to the public this month.

Bill Wright, Subiaco Abbey
Brother Basil Taylor, OSB, cooks up a batch of Abbey Amber at Subiaco Abbey’s new brewery and tasting room Sept. 25. The venture, 18 months in the making, opened to the public this month.

At long last, the art of the brew has come home to Logan County.

After years of brewing beer in small batches just for internal consumption by the resident Benedictine monks, the community is on the threshold of releasing its first commercial offering, Abbey Amber, in its own tasting room at the 140-year-old monastery.

“They’ve just got to hang the lights in the tasting room part of the brewery and that’ll be the final thing we need for the license,” said Brother Basil Taylor, head brewer. “Then, it needs to brew and sit for a little bit and ferment. So about two weeks after we get that license, we’ll be open.”

Brother Basil, a Fort Smith native who has been a member of the community for six years, has made a habit of shaking up the community’s offerings. He developed a line of soaps that the monks sell and was even given permission to monkey around with Subiaco’s legendary habanero Monk Sauce, resulting in a smoked version.

“When I first came to the monastery, Father Richard (Walz, OSB) was brewing small batches of beer for the community. He’d done that for quite a while before I joined,” Brother Basil said. “He just kind of passed it off onto me to give me something to do. I got the ball rolling and started making bigger and bigger batches and everybody started enjoying it.”

In fact, people have been enjoying Benedictine brews for 1,500 years. Medieval monks are credited with perfecting the art of brewing beer and some historians draw a line directly to St. Benedict himself whose Rule charged his order to support themselves with the work of their hands, which some accomplished with beer.

Given this lineage, it’s not surprising that beer and monks (and Catholics in general, for that matter) became closely associated. But rarely in its history has beer, especially American beer, enjoyed the widespread popularity and panache as it has with the craft beer boom of the past decade or so.

In 2006 there were 1,400 craft breweries nationwide, a number that would more than double in seven years and then more than double again between 2013 and 2017. As of June 2017, Arkansas alone had 30 breweries, a fraction of which even existed 10 years ago.

“I came up with a business plan and proposed it to the monastery and the monks seemed to agree with it and thought it would be a good thing for us to do, especially with the growth of microbreweries around the U.S.,” he said, noting about $10,000 has been invested in equipment, permitting and renovating a 2,000-square-foot barn to house the tasting room, commercial kitchen and brewery space.

The beer, which will initially be produced at a rate of 62 gallons a week, will be available in the tasting room in 64-ounce growlers, 32-ounce grumblers and 16-ounce cans. Given the proximity to Subiaco Academy, Brother Basil said onsite consumption by the glass will be prohibited but hopes to get the suds into local bars and restaurants in the near future.

Meanwhile, a second variety is in the testing stage, an as-yet-unnamed chocolate milk stout. Brother Basil said as the license was not yet final, the monastery couldn’t sell beer, but it could give it away, which they’re doing with fall celebrations at various parishes. Among them, Brewtober Chilifest at St. Raphael Church in Springdale Oct. 13 and ABC Fest at Christ the King Church in Fort Smith Nov. 3.

Brother Basil said so far, the response has been as positive as the line of people offering to help taste test is long.

“If I was to give everybody that wanted to get into quality control here a taste to make sure it was good, that would be a full-time job in itself,” he said with a chuckle.