Young MSM runner is a real natural on the track, course 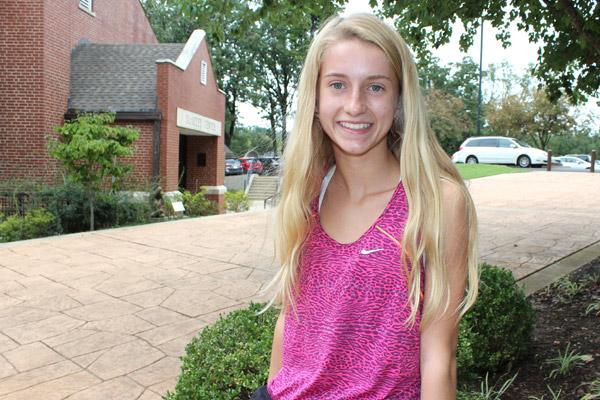 Dwain Hebda
Staley Tatum prepares for a training run at Mount St. Mary Academy in Little Rock. Last year’s MSM Freshman of the Year athlete is looking for even bigger things in her cross country and track seasons

Dwain Hebda
Staley Tatum prepares for a training run at Mount St. Mary Academy in Little Rock. Last year’s MSM Freshman of the Year athlete is looking for even bigger things in her cross country and track seasons

You’d be hard-pressed to find a more low-key elite athlete than Staley Tatum. Asked what she gets out of her chosen sport — running — the Mount St. Mary Academy sophomore offers a shrug and a shy smile.

“It’s just what I love to do,” she said. “It’s definitely an escape sometimes. If I’m having a really bad day I can go and run and I feel so much better.”

Tatum’s nonchalance is fed by the fact that she fell into the sport naturally, tagging along with her older sister and her dad, Chris Tatum. From there, the now-16-year-old just did what felt right.

“My sister ran cross country and I never considered myself a distance runner,” she said. “I always ran sprints in middle school, but I decided I would just try (distances) out and I loved it. I’ve been running distance now instead of sprints.”

“I should have been running a lot faster during the cross country meets. So this year my strategy is to stick with the top girls, just get out in front and try to hang on.” Staley Tatum

If her freshman year is any indication, running loves Tatum right back. She earned All-Conference honors in cross country and qualified for the state meet in the process, narrowly missing All-State designation. In track, she was again All-Conference and placed fifth at the state meet at 800 meters. That finish was good enough to land her in the Meet of Champions, an all-star event following the state championships.

Her accomplishments also landed her the Mount’s Freshman of the Year Award denoting the top-performing athlete in ninth grade.

“(That award) was very exciting,” she said. “It was very unexpected because I’ve heard the freshmen winning it in the past were girls that did soccer, volleyball, basketball. I never really thought that maybe I could win it.”

All accolades aside, freshman year was a learning experience and as she tackles her sophomore campaign, she feels like an entirely different, entirely more informed, competitor.

“Last year for cross country, I had no idea what I was doing,” she said. “My track times didn’t correlate with my cross country times. Based on my track times, I should have been running a lot faster during the cross country meets. So this year my strategy is to stick with the top girls, just get out in front and try to hang on.”

Part of what allows Tatum to employ such a tactic is the quality of her running form. Better form equals more efficiency and better energy usage and Tatum’s stride allows her to do just that, even against longer-legged competitors, which is pretty much all the time. Not that she ever really gave much thought to the matter, being blessed with a naturally sound gait.

“No one ever worked with me on form,” she said. “I just ran, I never thought about my form. And we were talking about one day and the coaches were like, ‘Yeah, you just have a natural running form.’ I was like I don’t know what that means.”

“I have a shorter stride, but I move quicker on my feet. So I think that may make up for not having as long of a stride.”

Tatum’s goals are lofty this season and include another All-Conference nod in cross country and track and a place on those respective All State teams she missed last season.

To make that happen, she’s running six days a week both on her own and with her teammates. And with each step, she’s reminded how much she loves the sport and how badly she wants to excel in it, in high school and maybe beyond.

“I’m very motivated. I really don’t have many days where I don’t want to run,” she said. “It just makes me so happy. And, I’m very hard on myself, so if I don’t do well, I know what I need to do the next time and I’ll learn from that mistake. I’m very determined to do better at every meet.”