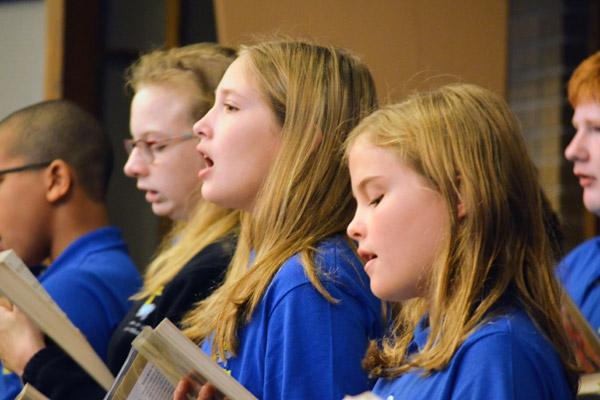 Courtesy Brie Anwar
Hope Harvey (right), Emily Pence and Vivian Fischer sing in the Junior High Choir during the 8:15 a.m. All Saints Day Mass Nov. 1, along with 71 others singing or playing handbells at Immaculate Conception Church in North Little Rock. Pence is one of the children who will sing at the Dublin Choral Festival in Ireland next year.

Courtesy Brie Anwar
Hope Harvey (right), Emily Pence and Vivian Fischer sing in the Junior High Choir during the 8:15 a.m. All Saints Day Mass Nov. 1, along with 71 others singing or playing handbells at Immaculate Conception Church in North Little Rock. Pence is one of the children who will sing at the Dublin Choral Festival in Ireland next year.

Parishioners from Immaculate Conception Church and School in North Little Rock will travel to Ireland next year to sing in the Dublin Choral Festival. But they will give more than their voices, donating to a parish where they’ll celebrate Mass at in Belfast to put toward local hunger or poverty programs.

“I almost feel like that’s why we were selected,” with God knowing that they’d be willing to give back, said Steve Guilmet, music director. “It’s amazing we were selected because it’s all word of mouth.”

In August, Guilmet confirmed that the parish had been invited to participate in the inaugural Dublin Choral Festival June 18-26, 2019, put on by Music Celebrations International. There, more than 240 voices from around the United States will sing together. Immaculate Conception is the only group representing Arkansas.

The festival will include three days of rehearsals, culminating in a mixed voice performance at Christ Church Cathedral in Dublin, the oldest medieval cathedral in Ireland, according to dublinchoralfestival.org.

There are 48 parishioners and students, aged 10 to 87, who will attend, with six on the waiting list. If more people request to attend, another bus may be added to the tour.

The cost for each person is $4,200, with about $48 earmarked from each ticket to donate to the currently undetermined Belfast parish that they will use for a local hunger or poverty relief charity and where the choir hopes to provide music for a Mass. Prayer intentions will also be traded with the parish, allowing Immaculate Conception parishioners to pray for people in Ireland and vice versa.

Guilmet has already started getting the word out to local media and fundraising through parish activities, everything from selling Our Lady of Knock medals that they will have blessed in Knock, Ireland, to possibly raffling off a trip to Hawaii. A grant writer is also assisting, hoping to apply for at least 10 grants to help fund the trip.

But Guilmet said he isn’t stopping there — thinking outside the box, he’s written about 100 letters to businesses who support Immaculate Conception, researching and reaching out to Catholic philanthropists throughout the country.

Isabella Thomas, 10, a fourth-grade Catholic homeschooled student, is part of the children’s Seraphim choir and will be performing at the festival.

“I like singing for God,” Isabella said, who was the cantor at a school Mass for the first time Oct. 26.

Her mother Tonya Thomas said she and her husband Mark, a pilot, try to instill in Isabella the need to give back time, talent and treasure to the Church, which makes this trip special.

“We’re elated that she gets to not only develop culturally, but spiritually and also grow in music ministry and being able to reach people of other cultures, other socioeconomic statuses.”