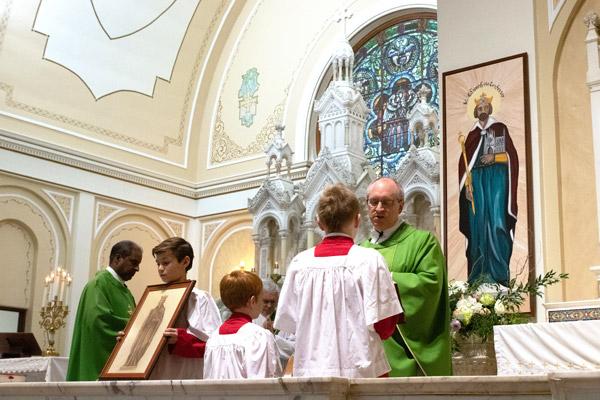 John Vutech
Father James West, pastor at St. Edward Church in Texarkana, celebrates the first Mass in the newly renovated sanctuary Nov. 17. The work took about eight years, with the sanctuary in process from April to November.

John Vutech
Father James West, pastor at St. Edward Church in Texarkana, celebrates the first Mass in the newly renovated sanctuary Nov. 17. The work took about eight years, with the sanctuary in process from April to November.

A church is more than a building — it is the people that make it come alive. But when the structure has seen its better days after almost 100 years of Masses, baptisms, weddings and funerals, the anticipation of a new look is something the parishioners of St. Edward Church in Texarkana have been feeling for about eight years.

On Nov. 17, parishioners moved back into their renovated building, complete with a new HVAC system, neutral color scheme and repaired bells to usher in the faithful. Receptions followed both the 5 p.m. Saturday and the 11 a.m. Sunday Masses. About 300 people attended the Saturday Mass.

“The support of the parishioners for this project has been incredible and it has gone far more smoothly than I ever would guess that it could,” said pastor Father James West.

Even though he became pastor only last year, he grew up attending St. Edward.

“I’ve seen the personal affection our parishioners have for this church building. That has really come through during this process. That’s why people will come in and literally tear up when they look around and see how beautiful it is. They have a heart for that church.”

The parish was established 95 years ago. Though the church was renovated in 1986, this project was the most extensive undertaking, said Mikey Naples, plant operations and maintenance for St. Edward, who was in charge of the restoration efforts.

“I’m really blessed because I can use my talents and be a part of something beautiful and great. It’s like giving back in other words,” Naples told Arkansas Catholic after the weekend’s festivities. “It was great and really I can’t put it to words because they love this church,” he said of the parishioners.

The project came in phases throughout the past eight years when then-pastor Father Paul Worm hired Naples to work for the parish and as head of this project.

“Father Paul at that point in time, I knew he really cared about the church and basically that got everything” started, Naples said, including asking him to work on this project.

The New Jersey native, who moved to the parish in 1983, said he emphasized, in his signature Jersey accent, “You’re making me an offer I can’t refuse.”

The church first worked for years on waterproofing and sealing the exterior of the church and the basement. At one point, it included digging out 300 yards of dirt, Naples said.

“Since they built the building it was leaking … It took us six years at least to finish sealing up the complete church,” Naples said. “There was a lot of sweat equity into this project on the volunteers. That made a big difference financially. The more we do, the better off we are.”

The roof was replaced using the same Chicago company that built the original 1923 roof, complete with replica tiles.

The most extensive interior work was done from this year. Father West said the goal was to do the bulk of the work between Easter and Christmas to “make sure we could celebrate both of those major feasts in our actual church and that is going to happen.”

Parishioners have been celebrating Mass in the parish hall, in the basement of the church.

Other updates included cleaning and grouting the bricks, repainting and stenciling, putting in more cabinets and better lighting in the sacristy/altar server room, updated heating and air system, completely redone ceiling arches that had been cracking, refurbished pews, securing stained glass windows and asbestos abatement in the flooring.

Father West said the concrete foundation of the floor was disintegrating, which was repaired and new carpet was installed.

The project has cost roughly $775,000, with most of the money coming from parishioner pledges and borrowing from the parish’s savings, said Brenda Engel, office business manager since January.

“It has been remarkable what the people have done here,” Engel said, adding of previous restorations, “… I think initially they were trying to do this as conservative as possible, but you also want to do it correctly and by that I mean you do what needs to be done so you don’t have issues in the future.”

Even the parish bells were repaired and upgraded thanks to Engel, who reached out to an expert she knew who previously helped restore bells at St. John Church in Hot Springs. Insurance covered the costs as it was determined they were struck by lightning.

A parishioner made a roughly 5-foot tall painting of St. Edward for the sanctuary and parishioner John Heath did artistic woodwork in the vestibule, Father West said.

David Mounsey, head of the building and grounds commission, echoed the opinions of many that the new color scheme of neutral and cream tones lightened up the sanctuary compared to the green added during the 1980s restoration.

“It actually makes the stained glass windows shine more, pop when you look inside,” he said.

Trying to hold back tears a day before the unveiling, Mounsey said, “I get very emotional about this. It’s just beautiful, it’s just so gorgeous. I think everyone will be proud when they come in to see everything.”

The renovation was done for both necessity and celebration — the 100th anniversary of the parish will take place in 2023. Restoring the Stations of the Cross and statues will be done within the next five years. Director of Faith Formation Kelli Nugent, a parishioner for 24 years, said the new design creates a more spiritual experience.

“It lets you focus more completely on the sacrifice of the Mass,” she said. “… There’s not distractions of these imperfections or repair work that needs to be done and allows us to just be in a spiritual place of worship.”

Naples reflected on the years of hard work, but also on one of the people he wished could be there to celebrate. Deacon Joe Bruick, who served 20 years as a deacon before dying of cancer in 2013, was an avid supporter of the project.

“He truly was my mentor, and I feel that what I do is a reflection of him,” Naples said.