A Catholic you want to know: Aj and Marjorie Williams-Smith

Renowned artists, dedicated members of the Cathedral of St. Andrew in Little Rock 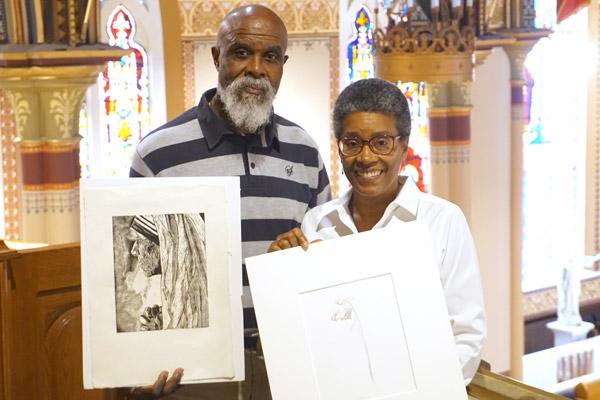 Aprille Hanson
Aj Smith and Marjorie Williams-Smith hold some of their artwork in the choir loft overlooking the sanctuary of the Cathedral of St. Andrew in Little Rock where they’ve been members for more than 30 years.

Aprille Hanson
Aj Smith and Marjorie Williams-Smith hold some of their artwork in the choir loft overlooking the sanctuary of the Cathedral of St. Andrew in Little Rock where they’ve been members for more than 30 years.

Why you want to know Aj Smith and Marjorie Williams-Smith: Aj and Marjorie bring spirituality into their work as artists, drawing from their faith. Both have served as professors in the University of Arkansas Little Rock art department, where Aj currently teaches all levels of drawing. Aj is a master printer and his art is in private and public collections, including in the U.S. Library of Congress. Marjorie, who was an art professor for 33 years before her retirement, has art displayed throughout public and private collections on the East Coast and mid-South. She was recently announced as the individual artist winner for the Governor’s Arts Awards for her contributions to the Arkansas art community.

In their own words

Aj: Having time to exchange with people where the exchange is completely open and positive. There is so much guardedness in what we say and what we do. We try to mask our true feelings and identity and thoughts.

Marjorie: I feel renewed when I’m drawing, but also in those times when things happen that you don’t have a logical explanation for, it can like little things and you just think “Wow, that was a blessing right there, I can tell.”

When your artwork was chosen for the Congressional Gold Medal for the Little Rock Nine in 1999, what did that mean to you, Marjorie?

Marjorie: I’m a part of that history now. … When it came time to submit artwork, it was very challenging because I could not use any preexisting photographs. So I had Aj pose for me, I had my oldest daughter pose for me.

How special is it, Aj, to have your work included in the U.S. Library of Congress?

Aj: It provides a wider audience. People get to see that work, people that I don’t even know.

How does your faith influence your artwork?

Marjorie: I know when I go to Mass or when I have some quiet time before Mass or after, just having that quiet communion with the Holy Spirit and trying to get centered. … We can get so wound up in the busyness of our lives and we don’t stop to just say a prayer, just say thank you, thank you for lots of little things we don’t pay attention to. So I try to put that in the art. That’s why I use nature as my vehicle because I think that could maybe speak to a person in that way — that I’m wanting them to slow down and really pay more attention and connect.

Aj, you converted to Catholicism in the mid-1990s from the Baptist faith, but at the time saw more things in common between Protestants and Catholics. You mentioned Msgr. Francis Malone, then rector of the Cathedral, imparted some words of wisdom during RCIA that you’ve used in the way you look at spirituality and your artwork.

Aj: I don’t remember his exact words, but it was to the effect “Focus more on what Catholics and Baptists and Protestants have in common and less of the differences.” So I see my work as addressing more of that what is common, not to be disparagingly one way or the other, but my work is focusing more on the spiritual commonalities between the different denominations, orders and groups.