Newest member of Carmel made her solemn profession on Nov. 25 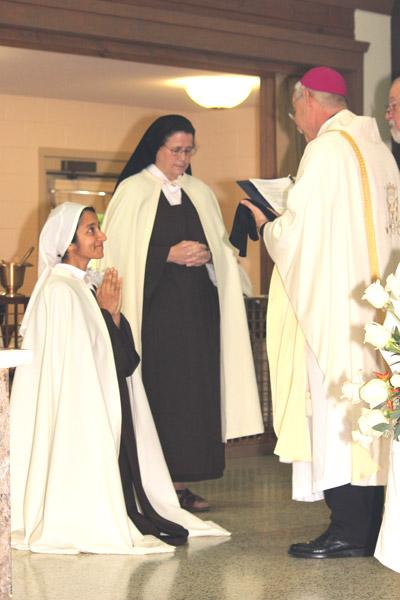 Susan Holmes
During her solemn profession Nov. 25 at the Carmel of St. Teresa of Jesus in Little Rock, Sister Anu Maria, OCD, smiles at Bishop Anthony B. Taylor as he gives her the black veil while Prioress Sister Lucia Ellender, OCD, prays.

Susan Holmes
During her solemn profession Nov. 25 at the Carmel of St. Teresa of Jesus in Little Rock, Sister Anu Maria, OCD, smiles at Bishop Anthony B. Taylor as he gives her the black veil while Prioress Sister Lucia Ellender, OCD, prays.

But she admits now it makes sense. On Nov. 25, Sister Anu Maria, OCD, 34, made her solemn profession with the Discalced Carmelites of the Carmel of St. Teresa of Jesus in Little Rock.

“Anu Maria — It has to be with something,” she told Arkansas Catholic Dec. 3. “By myself I don’t have much meaning, but when I am with God everything about myself gets meaning. I never liked my name growing up because it didn’t have meaning but now I’m grateful for it.”

Sister Lucia Ellender, OCD, prioress of the now 13-member community, said in an email that Sister Anu Maria, “has worked very hard to be open to God’s work within her and that alone is a great gift to build up our community, our diocese and the Church.”

“She brings to our community many gifts, most notable being her joyful presence and love for her sisters and those whom she comes in contact with and her willingness to be available when a need arises,” the prioress said. “She also brings with her the beauty of the Indian culture, which greatly enriches our community.”

She was born the third of four children to Jessy Jose and Jose Joseph Thekkekuttipalackal in the Kerala state of India.

“We had daily prayers as a family together, like saying the rosary and other prayers. We’d go to Sunday Mass,” she said.

“There were also Hindus and Muslims,” in her city, making up her friend circle. “I think because of the diversity we were taught to look at each other as brothers and sisters, with the same God.”

But all the diversity couldn’t prepare her for moving to Westchester County, N.Y., with her family in 2002 at 18 years old.

“There was a cultural shock and things did get cloudy, but every time I turned back, that call was right here,” Sister Anu Maria said.

She attended Binghamton University in New York, earning a bachelor’s degree in electrical engineering. She worked as an automation engineer for a pharmaceutical company in Pennsylvania.

She looked up information about the Carmelites online, leading her to the word “cloistered” and found the list of orders in the United States.

“I like St. Peter and that’s how I decided to look up Little Rock,” she said, as St. Peter was the rock upon which God built his Church.

“I felt that I was coming home. It was funny even though I went back, I never felt like I left,” Sister Anu Maria said of her first visit and entered the convent in 2012.

She made her first profession in 2015. Her parents, who visited from India, siblings and other relatives came to her solemn profession.

“Something that Sister Lucia said that helped me so much, it was ‘go deeper, you have to go deeper’” in her faith life, she said. “There was a time she would just keep repeating that and that was just what I needed to hear.”

Even though it took a change in countries and years of God leading her, Sister Anu Maria found her spiritual home.

“This is a very diverse community; deep inside there is love and it’s a beautiful thing, a holy thing and I’m grateful,” she said.