Ordained in 1981, Msgr. Scott Marczuk has taken on many roles in the diocese, from pastor to judicial vicar to 'tour guide, curator, historian, media relations coordinator and behind-the-scenes production manager' as rector of the Cathedral of St. Andrew. 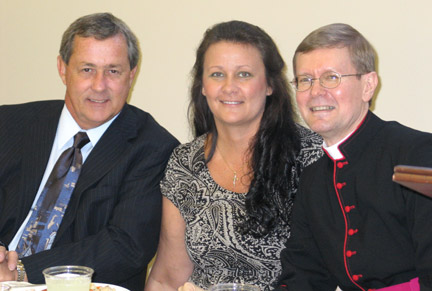 Tara Little
Msgr. Scott Marczuk (right) poses with his sister and brother-in-law, Tammy and Ron Smith, June 25 at McDonald Hall in Little Rock. He was ordained on the morning of June 27, 1981, and then co-officiated their wedding that afternoon. A joint reception followed that included a polka dance.

Tara Little
Msgr. Scott Marczuk (right) poses with his sister and brother-in-law, Tammy and Ron Smith, June 25 at McDonald Hall in Little Rock. He was ordained on the morning of June 27, 1981, and then co-officiated their wedding that afternoon. A joint reception followed that included a polka dance.

Msgr. Scott Marczuk smiled as he recalled drawing himself wearing a Roman collar and holding a Bible. He knew in the first grade he wanted to be a priest and entered the seminary right out of high school. He said he felt blessed that he never had to wrestle with his decision, he just "always knew."

Now 51, the rector of the Cathedral of St. Andrew in Little Rock is celebrating 25 years of priesthood and looks back fondly on a life that has brought him fulfillment and joy.

The cathedral celebrated his silver jubilee at the June 25 Mass and reception. In his homily, Msgr. Marczuk expressed the fruits of his ministry by way of his sacramental stats. As of that date it was 493 baptisms, 144 confirmations, 241 weddings, 183 funerals, 284 first Communions, 1,080 anointings of the sick and 11,396 Masses.

The oldest of five children, he was born in Fort Sill, Okla., in 1955. He moved to Little Rock in 1969 so his father could help build the I-430 bridge over the Arkansas River.

He graduated from Catholic High School and entered Holy Trinity Seminary in Dallas in 1973. After earning his bachelor's degree he went on to the North American College in Rome where he studied at the Pontifical University of St. Thomas Aquinas.

He earned his theology degree in 1980 and Bishop Andrew J. McDonald ordained him on June 27, 1981, at the cathedral.

The new priest served at Our Lady of Good Counsel and Our Lady of the Holy Souls churches in Little Rock and Christ the King in Fort Smith before going to the Catholic University of America in Washington, D.C. where he earned a canon law degree in 1989.

He then was named pastor of St. Mary Church in North Little Rock and adjutant (assistant) judicial vicar for the Diocese of Little Rock. He served as judicial vicar from 1990-2004 making him the diocese's chief judge for annulment petitions.

He was named diocesan vice chancellor in 1990 and still holds that position today. In that role he gives dispensation (permission) for marriages in the diocese, based on adherence to all canonical requirements for marriage in the Catholic Church.

Pope John Paul II gave him the title "monsignor" in 1998.

Msgr. Marczuk became rector of the cathedral in 1996, a position unlike being pastor of a parish. As the mother church of the diocese, the bishop is the cathedral's pastor and the rector is the administrator who serves as the bishop's assistant and representative.

He said he took on the restoration of the cathedral in 2000, a project still in progress. His natural inclination toward history led him to enjoy the process, even though he had no previous experience with restoration.

Bishop J. Peter Sartain appointed him, one of seven, to the College of Consultors. The importance of this role was most evident June 29 when the group elected Msgr. J. Gaston Hebert diocesan administrator.

"We never thought that would happen," he said. "It was our little diocesan conclave."

Reflecting on his vocation, he said, "I've been very blessed. I would do it again. God's been very good to me and I appreciate the assignments and the people I've worked with."

Msgr. Marczuk looks forward to the next 25 years: "There are always unexpected adventures," he said.