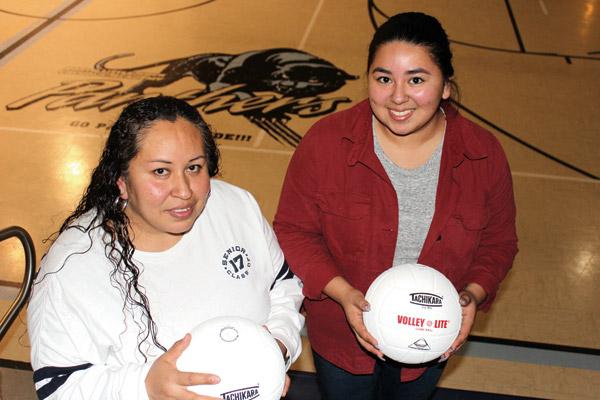 Dwain Hebda
North Little Rock Catholic Academy’s Lucy Reyes (at left) and Mihaela Reyes pose for a post-season photo. The mother-daughter tandem led the Panthers to the league title in their first year of coaching.

Dwain Hebda
North Little Rock Catholic Academy’s Lucy Reyes (at left) and Mihaela Reyes pose for a post-season photo. The mother-daughter tandem led the Panthers to the league title in their first year of coaching.

Through the double doors at the end of a brightly-lit hallway, Lucy Reyes and her eldest daughter Mihaela stride into the half-darkened North Little Rock Catholic Academy gym.

A loose gaggle of fifth-grade girls loll near the entrance not far from the grinning team portrait of last semester’s volleyball team. In the split second it takes for the coaches’ eyes to adjust to the change in light, their players swarm them in greeting

The palpable bond that exists between coaches and athletes is a far cry from the start of the year. Back then, all the coaching duo knew of this group was it needed leadership.

“(My sister) Cindy is a fifth-grader. She told me, ‘We don’t have anybody to coach volleyball, so there might not be a full fifth-grade team,’” Mihaela, 20, said. “I was like, ‘Don’t worry about it. They’ll find someone.’”

“(Cindy) was really pushing us and I kind of said the same thing, ‘They’ll find someone,’” Lucy said. “Then they sent a note home that said there may not be a fifth-grade team. I did feel kind of bad.”

“I remember sending the letter back and saying I’ll help whoever the coach will be. I’ll be glad to help. I’ll always be there. You always can count on Ms. Reyes.”

Principal Denise Troutman, whose teaching career includes 15 years prowling the sidelines herself, smelled blood in the water. She called Mihaela and invited her to coach the team, assisted by her mother. Though lacking an extensive sports background and being the only one of the five Reyes kids not to have attended NLRCA, Mihaela agreed.

Lucy, in her ninth year as a school parent and a member of St. Anne Church in North Little Rock, didn’t have any coaching experience either. But once agreed, she was determined they’d live up to their commitment.

“Believe me, when I said yes to Ms. Troutman I knew that was a big responsibility,” Lucy said. “I sat down and spoke to Mihaela. She works nights a lot of times. She works days, too. She goes to college in the day. It’s hard for her already, being a 20-year-old. But I said to her, ‘If you’re going to do this, you’ve got to do this.’ We’ve got to be there. Ms. Troutman’s counting on us.’”

This year’s squad — all nine of them, accounting for every girl in the fifth grade — boasted some experience as several athletes played up as fourth-graders last season. The rookie coaches, by contrast, were rank beginners at every aspect of running a team.

“(When) I received a phone call from Ms. Troutman, I said, ‘I have experience but not much experience,’” Mihaela said. “I played, like, sixth grade, seventh grade, just one year. My mother had a whole lot of experience because she played all through high school.”

“I sat down and talked to God and said, ‘Just help me because I don’t know what I’m up against.’ Like, nine fifth-graders? Really? I mean, my daughter’s one of them but, I don’t know, you know? Just trying to make a practice outline was hard for me. If someone didn’t show up to practice, well, you’ve got to just figure it out,” Lucy said.

Players weren’t the only ones who learned how to work together. Ultimately, mother and daughter came to coach and think similarly regarding productive practices and game strategy. But that doesn’t mean there weren’t a few hiccups off the start.

“There were two lives we were living; there’s the mom and daughter and then there’s the coach and the assistant coach,” Miheala said. “At the house we know what to do. But here it’s like ‘OK, Mom, I’m in charge. I got this.’”

“Sometimes we bumped heads, but then I’d say ‘OK, you do your part first and then I’ll do mine.’ My mother and I have always had a bond, so it was pretty easy.”

Once rolling, the team made it look easy too, winning all but their final game to claim co-regular season honors. They got the chance to avenge their one loss, to the much larger Immaculate Conception School of North Little Rock, in the post-season tournament final.

After prevailing over their cross-town rivals for tourney honors, the Panthers returned to NLRCA conquering heroes. Now that the hubbub has died down, the mother-daughter team that led them to the promised land are restless and ready to do it again.

“I miss it ever since we quit,” Lucy said. “The following week, that Monday, my little ones are like, are we going to have practice today? I was like, ‘Guys, the season’s over.’ I still miss it. I told Cindy I would help again; she still comes up to me today and says, ‘Mama, thank you for helping coach my volleyball.’

“The girls say, ‘Are you going to coach next year? Are we going to see you next year?’ Mihaela said. “We’re comfortable here. We know everybody. I love it here.”