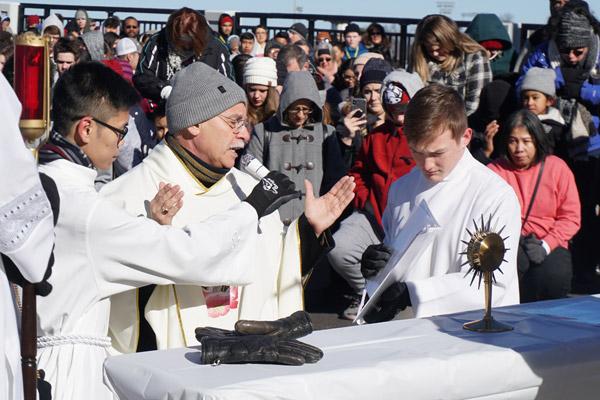 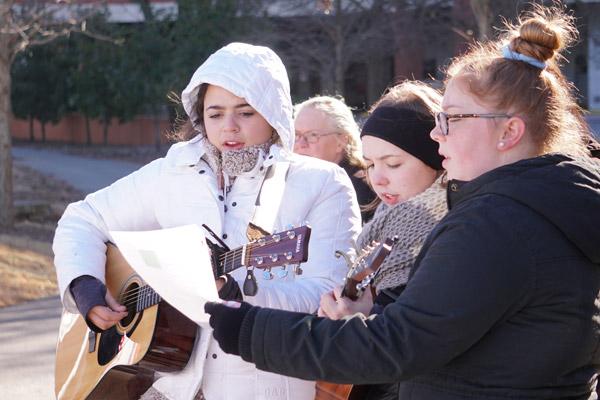 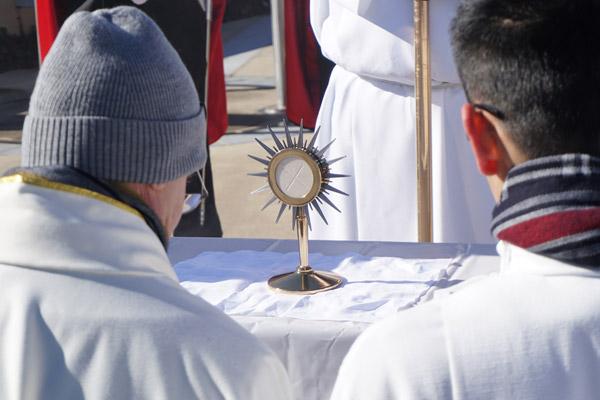 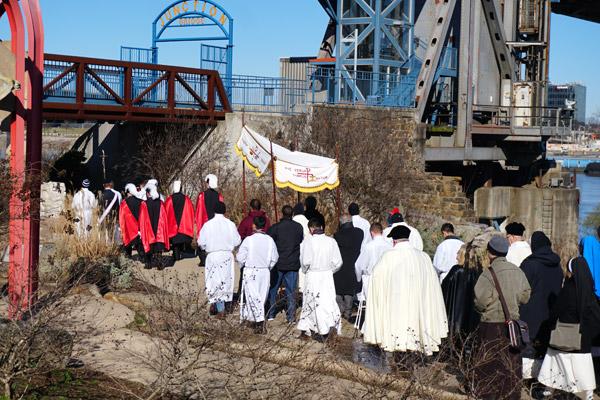 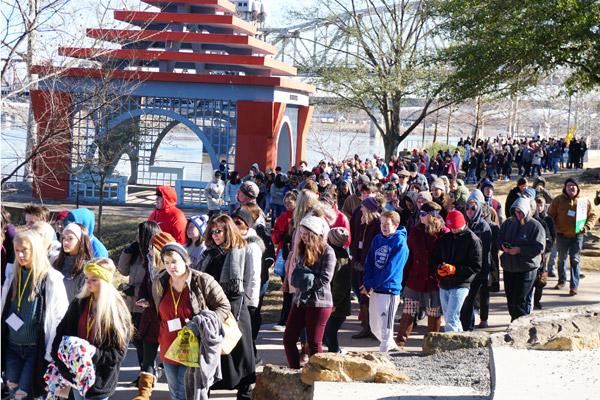 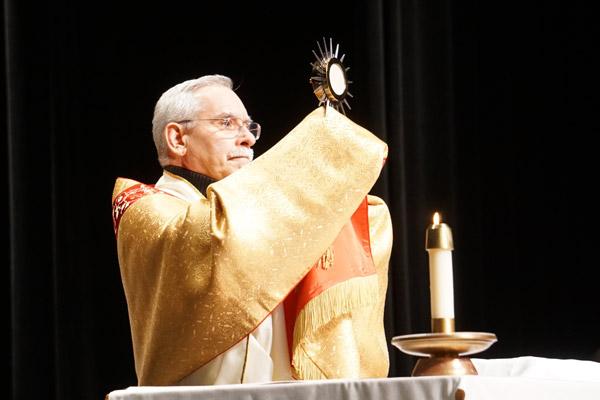 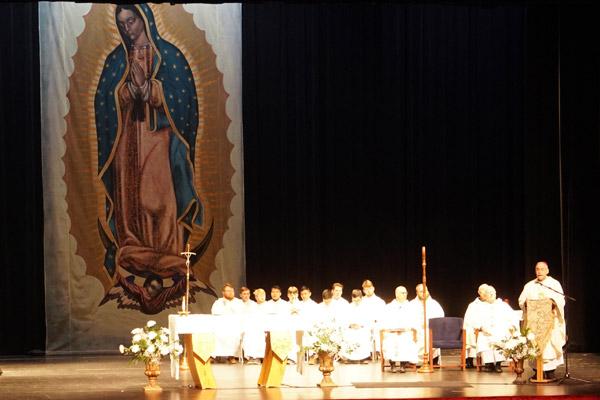 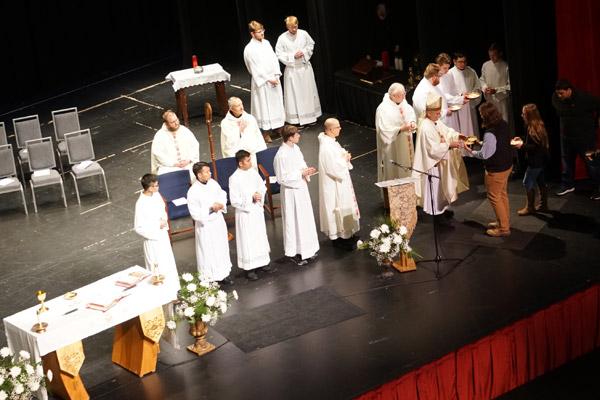 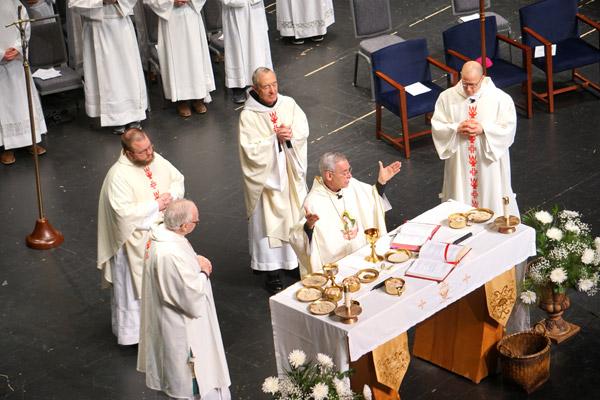 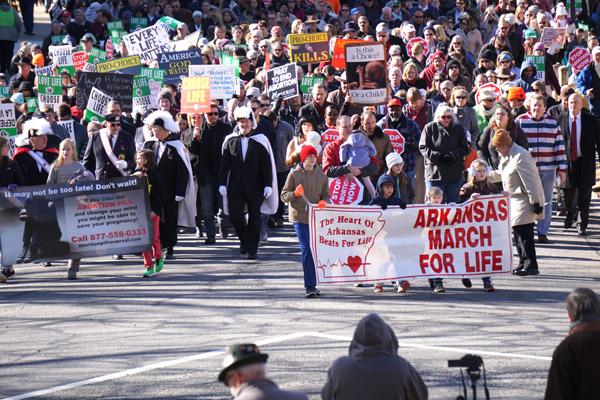 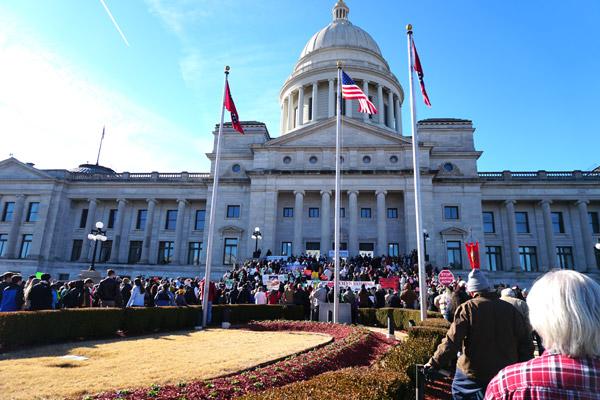 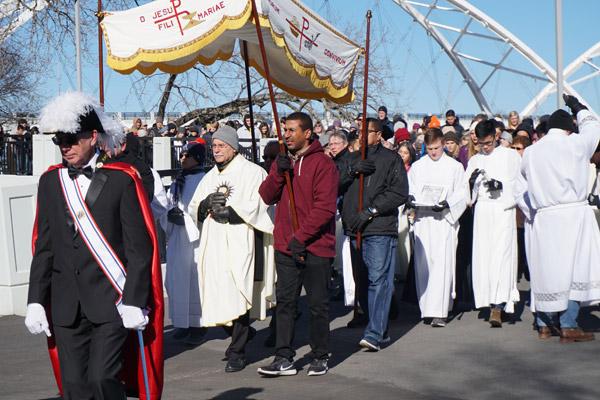 In 2017, the latest available data, there were 3,249 abortions in Arkansas, 42 more than in 2016, according to the Arkansas Department of Health.

Aborted children ranged in gestation from less than five weeks, 638, to one at 20 weeks, or five months. There were 28 aborted at 19 weeks, in the second trimester, according to the ADH report.

There were 921 medication abortions and 2,328 surgical abortions, through suction and dilation and evacuation, termed in pro-life circles as “dismemberment abortions.”

During the annual Mass for Life, Alex Sweeney gently kissed the cheek of her cooing 7-month-old son Logan.

“This is our first baby,” she said of her and her husband Ian, parishioners at the Cathedral of St. Andrew in Little Rock. “It hits home; it means a lot more now to think about how horrible abortion is.”

The annual Mass for Life celebrated by Bishop Anthony B. Taylor was brought back to Robinson Performance Hall in Little Rock Jan. 20, preceded by the first Eucharistic procession hosted by the diocesan Respect Life Office. About 800 people attended the Mass.

“Praise God for the clear, dry weather today and the sunshine,” said Catherine Phillips, respect life director who organized the event. “Everything went according to God’s plan.”

It was a weekend filled with pro-life events, including the first Hearts for Life adult conference and the annual Weekend for Life for teens, sponsored by the Catholic Youth Ministry Office. The March for Life, the annual march against abortion sponsored by Arkansas Right to Life, was held at the State Capitol at 2 p.m.

This year marks the 46th anniversary of Roe v. Wade, which legalized abortion in the United States. Due to Robinson Center renovations and a booked Statehouse Convention Center in downtown Little Rock, the Mass for life in 2017 and 2018 was split, one for teens and adults, at the Cathedral of St. Andrew in Little Rock.

Susej Thompson, pastoral music director at Our Lady of Holy Souls Church in Little Rock, and Team Jesus, the high school youth band from Christ the King in Little Rock, provided the music for the Mass.

In his homily, Bishop Taylor said emphasized that St. John Paul II promoted a consistent ethic of life in his encyclical “The Gospel of Life.” Pope Francis has built upon it, pointing to the evil of economic inequality.

“Abortion is part of an economy that kills,” Bishop Taylor said. “The abortion industry is driven by huge profits and many of the victims are poor and have few prospects in life.”

Pope Francis has said repeatedly that pro-life issues are interconnected, though abortion is the most “depraved expression,” of a throwaway culture. However, children who die in hunger and war zones, immigrants who drown trying to reach a new life, victims of terrorism, the elderly who are discarded and environment being devastated are also connected, Bishop Taylor said.

“Pope Francis has said, ‘At stake in all of this is the gift of God, of which we are noble stewards but not masters. It is wrong to look the other way or remain silent.’

“We are here today because we are not willing to look the other way and remain silent when it comes to abortion,” the bishop  said.

Bishop Taylor pointed out again the reasoning for not attending last year’s March for Life, which featured attorney general Leslie Rutledge as the keynote speaker, and although she was not speaking on the topic of capital punishment, she is pro-death penalty. This year, Bishop Taylor reminded the congregation about the March and said he would be attending.

“It’s all interconnected. If life is sacred, then we must find a way to provide universal access to medical care and compassionate care for the elderly and medical research that does not require the destruction of human embryos. If life is sacred, then immigration, when necessary, is a pro-life issue. The planet belongs to all of us. As is welcoming refugees, working to end gun violence and unemployment and, on this Martin Luther King weekend, racism.”

“Today we give witness to the sacredness of life in the womb, but that witness will lose credibility if we forget this life remains sacred once it leaves the womb, all the way to natural death,” Bishop Taylor said.

“They are just one and the same,” Sweeney said. “Pro-life extends to more than abortion.”

Marti Haslauer attended the Mass for Life with her husband Jon and four of her eight children, parishioners at Our Lady of Good Counsel Church in Little Rock.

“We are so saddened that abortion is a reality in our country,” she said, adding her 7-year-old daughter Mary asked midway through the Mass what abortion is exactly. When she explained it, her daughter’s eyes were big and tearful, she said. “We have to be here and be a part of this because (abortion) is wrong. It has to stop.”

Haslauer also took her 5-year-old son Mark to the Eucharistic procession, explaining “we were going on a walk with Jesus.”

“It was really beautiful, really special,” she said, hoping to take her whole family next year.

Despite the 30-degree temperatures, hundreds of people, including teens who attended the Weekend for Life, participated in the first Eucharistic procession, giving a prayerful, public witness to the Catholic faith. The one-mile procession began at 10 a.m. on the plaza in front of the DoubleTree Hotel, with participants weaving through Riverfront Park until reaching Robinson.

Bishop Taylor led the procession with the Blessed Sacrament, stopping at seven stations sponsored by different ministries: Team Jesus at Christ the King Church in Little Rock; the Filipino community; Knights of Columbus Council No. 812; the Serra Club; Hispanic group from St. Anne Church in North Little Rock; the Nigerian community and religious brothers and sisters.

Participants kneeled at each station, which included prayers, intentions and music.

“We just want to show how the Catholic faith is universal,” Hyginus Ukadike said of the station sponsored by the Nigerian community.

The group sang an African song “Come and Weep With Me,” about the crucifixion of Christ.

“We’re remembering all the children,” he said, with Dr. Joseph Onyilagha adding, “We think of the souls that have been wasted from abortion. We stand for all life.”

Claire Omeora, 14, a parishioner of Blessed Sacrament Church in Jonesboro, said the procession was “inspirational.”

“It’s like God speaks to you when you’re there” in his presence, she said.

At the station sponsored by Hispanics from St. Anne Church in North Little Rock, processors were greeted with a banner that read “One unplanned pregnancy saved us all” in English and Spanish with an image of the Holy Family.

“It’s important to defend life from conception to natural death,” Thomas Suarez said. Prayer intentions were prayed in Spanish for the unborn and families, followed by the song “Blessed be God” in Spanish.

Lindsey Harrison, 23, a member of Sacred Heart of Mary Church in Barling, said, “I think just the somberness of (the procession).”

“People being quiet and respecting the Eucharist,” she said was most powerful.

Paula Price, youth minister for St. Jude Church in Jacksonville, said it was good for the youth to participate.

“I loved it. I think to show our faith and to teach our youth about Eucharistic processions because half didn’t know” what it was prior to the prayerful event, she said, adding she prayed the rosary “for all life, womb to tomb.”

In 2017, the latest available data, there were 3,249 abortions in Arkansas, 42 more than in 2016, according to the Arkansas Department of Health.

Aborted children ranged in gestation from less than five weeks, 638, to one at 20 weeks, or five months. There were 28 aborted at 19 weeks, in the second trimester, according to the ADH report.

There were 921 medication abortions and 2,328 surgical abortions, through suction and dilation and evacuation, termed in pro-life circles as “dismemberment abortions.”