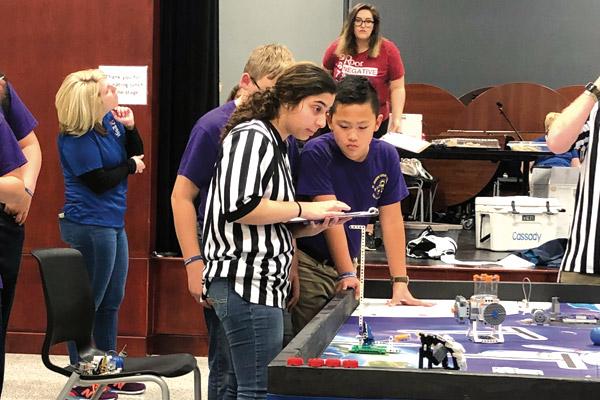 Courtesy Eileen Freeman
A judge in the regional competition looks over a robot brought by St. Joseph School in Paris as robotics team member Samuel Wu, 10, watches. The competition was held at the Springdale Don Tyson School of Innovation.

Courtesy Eileen Freeman
A judge in the regional competition looks over a robot brought by St. Joseph School in Paris as robotics team member Samuel Wu, 10, watches. The competition was held at the Springdale Don Tyson School of Innovation.

For young people, the words “coding” and “programming” may not have the flair as “manipulating robots,” but they are one and the same, used by school robotics teams worldwide.

In an effort to prepare students for science, technology, engineering and math (STEM) careers, Sacred Heart School in Morrilton, St. Joseph School in Paris, Our Lady of the Holy Souls School in Little Rock and Subiaco Academy started robotics teams, allowing students to master skills as simple as teamwork and complex as engineering.

“Basically that’s where our nation needs these kids,” said teacher Eileen Freeman, who founded and has led the program at St. Joseph for three years. “We need engineers; we need kids that come up with innovative ideas as a country. I’m not saying everything is going to become robotic, but robots are a huge part of our lives.”

Paris and Morrilton are affiliated with First LEGO League, which uses STEM skills to solve real-world problems, according to firstlegoleague.org. The league has more than 40,000 teams and 320,000 participants in 98 countries.

The Extraordinary League of Legos, the Paris team of five boys and one girl in grades fifth-eighth, competed Dec. 15-16 in the qualifying round of First LEGO League in Springdale, judged by categories in robot design, core values and their project. They qualified for state for the second time, and won the Judge’s Choice Award.

“We have fun, we work together, so we just kind of highlight those in our poster,” said eighth-grader Anna Hart. “… I enjoy how it’s like a lot of work and you actually learn stuff.”

The league’s theme for all-school projects this year was to solve a physical or social problem that astronauts face during a long duration in space.

All 32 teams at regionals used a LEGO Mindstorms EV3 robot.

The Robo Rebels at Sacred Heart School in Morrilton is led by coaches Susan Buser and Chris O’Cain. The team of 10 in fourth-eighth grades won the Champion’s Award, scoring the highest in all areas, and competed in the state competition Jan. 18-19 in Fayetteville.

“It’s not faith-based but with the core values” and teamwork, the competitions are spiritual, Buser said. Often, their pastor has blessed the robots. “Of course, when we’re at competitions we pray even if it kind of looks a little crazy to everyone else.”

Sacred Heart has had robotics teams for seven years with O’Cain, director of information technology at Winthrop Rockefeller Institute, as the leader and Buser, whose husband is an engineer, joining three years ago.

A second Morrilton team — made up of seven ninth-12th graders — competes through VEX Robotics in Texas. It has more than 20,000 teams in more than 50 countries.

Competitors get to write lines of code, controlling the “brain” of the 18-inch robot during competitions to complete tasks via a remote control similar to a gaming control, she said.

“Back in third grade I was watching ‘BattleBots.’ I went online and tried to find some robots I could build myself ... from there, it was just bigger, bigger and bigger robots,” said Susan’s son Thomas Buser, 15. His brother Matthew, 12, also competes. “The programing I like a lot because it’s very specific … you can tell it exactly what you want to do, how to do it.”

This is the second year Our Lady of the Holy Souls in Little Rock has competed through VEX Robotics, with four teams of 17 students in fifth to eighth grades. In December, University of Arkansas Little Rock STEM Education Center’s Sandra Leiterman, a VEX Robotics coach/instructor, taught students about writing code.

“They were really excited, they really wanted to get their hands on that coding software to watch it go by itself. They asked a lot of questions, they hit her with everything,” said coach Kelly Pace.

Pace, a volunteer whose eighth-grade son Harrison is on the team, along with teachers Heather Olvey, Margaret McGinness and Deborah Poirot lead the teams. Pace said their teams did score in the top 10 last year and competed at the UALR Winter VEX Robotics Competition Jan. 19.

“I would say aside from STEM careers just being exposed to engineering in general,” is a positive, Pace said, adding, “All four of our teams are majority girls. I really enjoy watching the kids problem-solve together and figure out teamwork.”

“There’s certainly critical thinking and problem solving and on the computer side the understanding of coding and writing the code; cooperation and tolerance for one another,” Spillers said.

Senior Andrew Chen, 18, originally from Taiwan, competed on a robotics team while living in New York for two years.

“After that I kind of got hooked,” he said, adding the best part is “test driving (the robot) because that’s the moment you see if the robots do well or not. That’s the most satisfying moment because you see your work put together and actually move.”