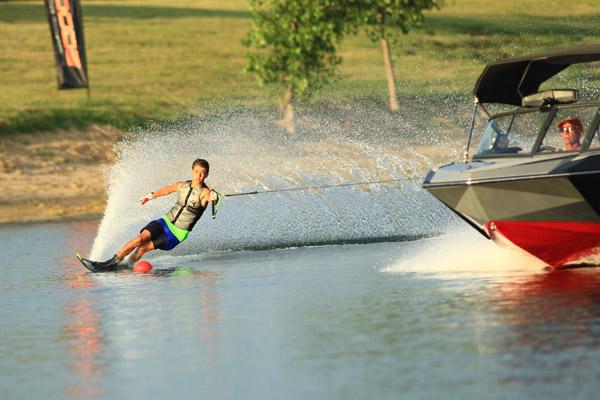 Nothing drives a competitor like a rival and when that rival is a member of your own family, the effect is multiplied. Andrew Boskus knows this all too well. The youngest among his siblings, and the only boy to boot, he’s had a lifetime of following in his sisters’ shadows both as a student and in the competitive arena.

Most biting of all was watching his older sisters compete and win in water-skiing, the family’s trademark sport and one that he started almost before he was old enough to start school. With every medal they won from local meets through international competitions, it pushed him to want to do more.

“It is a competition with my sisters, I really wanted to beat them all,” he said. “I mean, my whole family water-skis and I’m the baby-child.”

Boskus, 14, took a giant step toward overall family bragging rights in 2018 after a season of impressive finishes. The eighth-grader from St. Joseph School in Fayetteville won one silver and three golds, including the overall at the South Central Regional Championship in July. He followed that up with jump and overall honors at the U.S. Nationals in Wichita, Kan. Shortly after Nationals, Andrew was selected by the AWSA International Activities committee to be part of the six-person Under 13 Pan American Waterski Championships, contested in Santiago, Chile.

Although competing internationally for the first time, Boskus didn’t disappoint. He withstood windy conditions, persistent rain and wild daily swings in temperature to land the gold medal in the Under-13 Overall and pace Team USA to a second-place showing among 10 participating nations.

The spoils of his world-beating season have been equally sweet for the teen, from the praise of his peers to his school throwing a rally in his honor.

The remarkable year goes a long way toward putting Andrew on equal footing with his sisters. Julianna, 21, and Lauren, 18, are both scholarship skiers at the University of Alabama while Brooke, 15, is a top competitor in the junior ranks. All three of the girls competed internationally with Julianna claiming the Pan Am overall. The eldest also is a five-time national champion at the junior level.

The kids come by their skills honestly. Their parents, Roger and Karen Boskus, water-skiied on a club team in college and started all of the kids in the sport early. They’ve invested in their children’s passion by constructing two training lakes after moving from Little Rock to Elkins in northwest Arkansas a few years ago.

Competitive waterskiing is broken into three events. Trick resembles a skateboard or snowboard competition with airborne spins, flips and other stunts. Slalom mimics the familiar snow ski event as does jump, scored strictly by distance off a stationary ramp. The overall is determined by finishes in the three individual disciplines.

Andrew, who claims he was never a natural in the sport like his sisters, spends a lot of time each week honing his skills.

“The one event I really had to improve in was trick, I really wasn’t good at it. I’d been working on it all summer but that’s probably my worst event,” he said. “Jump was my strongest event. I was really good at it.”

Water-ski participation at the intercollegiate level is on the rise. The National Collegiate Water Ski Association lists nearly 80 collegiate member programs while another governing body, USA Water Skiing, claims more than 90. With the rise of these teams has come increased recruitment and scholarship dollars for top skiiers. Alabama’s squad alone includes not only the Boskus sisters, but Catholic High graduate Sam Greenwood.

“I want to ski in college and get a scholarship for skiing,” Andrew said. “I want to be able to ski when I’m out of college too, maybe even coach a team someday.”

Andrew’s more immediate goal is to qualify for Junior Worlds during the 2019 season, a goal shared by his sister Brooke.

“I kind of wanted to show them all up,” he said. “I mean, they help me and they drive me to skiing, but I think it’s more competition, you know? I’m just trying to outdo them.”