Color, symbols revive Charleston parish during renovation that lasted less than a year 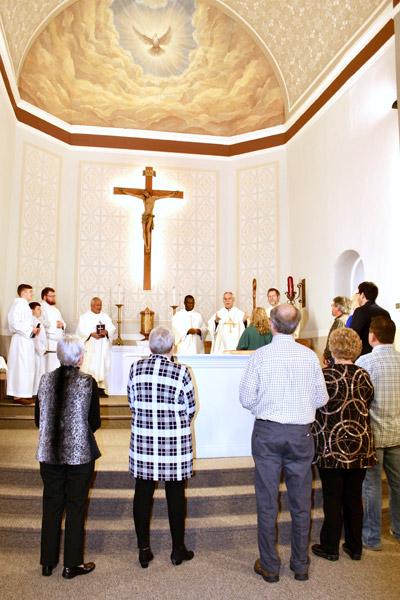 Photo courtesy Madelyn Eveld
Finance committee member Michele Schmitz presents a key to Sacred Heart Church in Charleston to Bishop Anthony B. Taylor under a new painting of a dove representing the Holy Spirit Feb. 10 during a rededication Mass. Members of the renovation steering committee watch.

Photo courtesy Madelyn Eveld
Finance committee member Michele Schmitz presents a key to Sacred Heart Church in Charleston to Bishop Anthony B. Taylor under a new painting of a dove representing the Holy Spirit Feb. 10 during a rededication Mass. Members of the renovation steering committee watch.

For 50 years, the sanctuary of Sacred Heart Church in Charleston was a blank canvas, with its white walls and suspended ceiling. Thanks to the dedication of the 500 congregants, the space was transformed with flowing arches, a mural of the Holy Spirit above the altar and the crucifix illuminated by a back light, drawing all eyes toward the tabernacle.

“Everyone that comes in says the same thing — they say, ‘Oh wow,’” said Deacon Mark Verkamp, who owns a remodeling business and was the project manager for the renovation. “It doesn’t matter if they’re a parishioner, non-parishioner or Catholic. There’s just a sense of amazement.”

At the 10 a.m. Mass Feb. 10, Bishop Anthony B. Taylor rededicated the church. Parishioners had celebrated the first Mass in their new church on New Year’s Eve.

The first Sacred Heart Church was wooden and dedicated in 1880. In 1902, the faithful began to build stone around the church and clear out the interior. Verkamp said, referring to written church history. It was finished in 1904. In 1952, there was a complete interior and exterior restoration and in 1968, there were other improvements, including adding the suspended ceiling.

Updating the parish was discussed throughout the years, and much of the credit goes to Father Peter Sharum, OSB, pastor for 26 years before his 2010 retirement, who had “the foresight to put money in savings” for future updates, Verkamp said. Father Sharum died in 2012.

The project cost roughly $500,000, with half coming from savings and the other donations and pledges from the capital campaign, launched in May 2018. Funds needed to begin the project were raised by the end of July.

Three years ago, the parish finance committee discussed making improvements to the church, settling on a paint job. In November 2016, finance committee members Michele Schmitz and Helen Bishop set out to see how other churches in the area incorporated color into their sanctuaries. By divine intervention, they met Kevin Grabowski, national project director for Conrad Schmitt Studios in Wisconsin, who happened to be at St. Mary Church in Altus, inspecting work the studio had done years ago.

Last year, the parish hired the renowned studio to create artistic designs within the sanctuary, which includes everything from a neutral color scheme to painting a dove floating amid the clouds above the altar.

“It’s a simple elegance. It’s not over the top. The colors are for the most part very subtle, but it’s calming,” Schmitz said. “Shortly after we moved in (in January), we had a rosary for one of our longtime parishioners (who died). We had the lights all dim and the crucifix at the front of the church” was illuminated. “The atmosphere in there, you just felt the presence of God.”

Volunteers helped move everything from the sanctuary Aug. 5 and renovations began the next day.

“There was a lot of artwork,” Verkamp said, adding there were about four different design patterns with each layer of plaster uncovered. “We’re going back to the style, but not trying to be 100 percent according to any one pattern that was there before.”

New lighting, carpet and a sound system were installed and a stained glass image of the Sacred Heart of Jesus is displayed on the bell tower, back-lit at night. Soos Stained Glass in North Little Rock also added 22 new stained glass windows along with the original ones.

Verkamp built a new altar, ambo, presider’s chair and rebuilt the staircase to the choir loft.

“When we were tearing out the old altar, we found the altar stone we believe to be from the original church,” Verkamp said.

Verkamp and Schmitz, siblings who grew up in Sacred Heart Church, both agreed seeing everyone’s reactions to the finished sanctuary was the best part of the project.

“It is very beautiful. It’s beyond words of how we feel about it. My enjoyment was watching other people and seeing their expressions,” Schmitz said. “This is not just a committee project or a few people. This is our whole parish.”

Pastor Father Patrick Watikha, AJ, broke out into song at both the first Mass celebrated in the new parish and at the rededication.

On the program given to parishioners for the rededication, Father Watikha wrote in part, “Why should a Catholic church be beautiful? We make the church beautiful because beauty is one aspect of the Holy Trinity. We have so many reasons to be thankful. Our church’s new outlook (our renovated, revitalized and beautified Sacred Heart Church) is a reflection of our community’s faith and efforts to renew and revitalize our Catholic faith.”