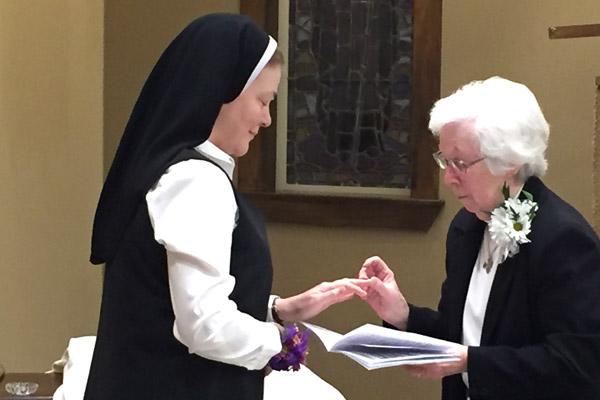 FORT SMITH — The feast of St. Scholastica was celebrated at the Fort Smith convent by accepting the perpetual vows of one of its members.

Sister Maria DeAngeli, OSB, prioress, said, “We are grateful for Sister Judith Maria’s ‘yes’ to God’s call to her to walk the monastic way of life with us.”

For Sister Judith, the weekend represented the culmination of a “very long journey,” which began when she joined the Church in 1997.

“When I became Catholic I was at a point in my life where I was searching for a deeper relationship with God,” said Sister Judith, who was baptized into the Baptist faith as a child. “I visited different churches. When I went to a Halloween party at my mother’s friend’s church and met Father Charles Thessing, he was just so joyful and fun that I thought, ‘Jesus would be like this.’ I went to Mass the next Sunday (at St. Jude Church in Jacksonville) and as soon as I walked in I knew I was home.”

Sister Judith joined RCIA at Immaculate Conception Church in North Little Rock and became Catholic the following Easter vigil. After graduating from college, she began volunteering with the Daughters of Charity in Little Rock and helping Sister Maria Liebeck, DC, in her ministries. She felt a calling to religious life when she read an article about the Carmelite sisters.

“When I saw that article in 2005, that was the first time I thought about religious life,” she said. “Something in it kind of pulled at me, and I thought maybe I was called to be Catholic because I was meant to be a nun.”

While she continued to work as a fourth-grade teacher in St. Patrick School and Immaculate Heart of Mary School, both in North Little Rock, and later in the public school system, she became friendly with the Carmelite sisters in Little Rock. In 2010, she made a decision to enter their community.

“The Carmelites go out occasionally but don’t have an active apostolate,” Sister Judith said. “I really felt drawn to monastic life. I wanted to have a more intimate relationship with God and give all to him, but after a time I realized I needed to work in active ministry, too.”

With the blessing of the Carmelites, Sister Judith entered into formation at St. Scholastica in 2012, finding that the Rule of Benedict’s prescription of “ora et labora” (prayer and work) was how God was calling her to serve.

During her period of formation, consisting of a year of postulancy, two years in the novitiate and three years of temporary profession, Sister Judith was gradually able to add active ministry to her schedule.

“I love monastic life,” Sister Judith said. “It’s not always as quiet as I would like, but we have an atmosphere of quiet. I love the monastic prayer schedule. I found that my gifts lie in teaching.”

Sister Judith volunteered at the Literacy Council and with the Hispanic community in Fort Smith. In 2015, after making her temporary profession, she taught Spanish at Christ the King School. Last August, she made a career change in order to have more time to work in the monastery.

“I teach adults English in a pilot program in Pike Elementary School,” Sister Judith said. “My students are parents who study with me and also attend their children’s classes. My students are a great group of people; they are all so nice. Some are studying for their citizenship test, and so I help them study their test materials.”

She also serves as the monastery librarian, volunteers as a Literacy Council tutor and participates in the spiritual director formation program.

Sister Judith said, “It’s been a nine-year journey and I’m very excited to take the next step and have more joy now than I’ve had throughout the whole journey.”