A Catholic you want to know: Christie Powell 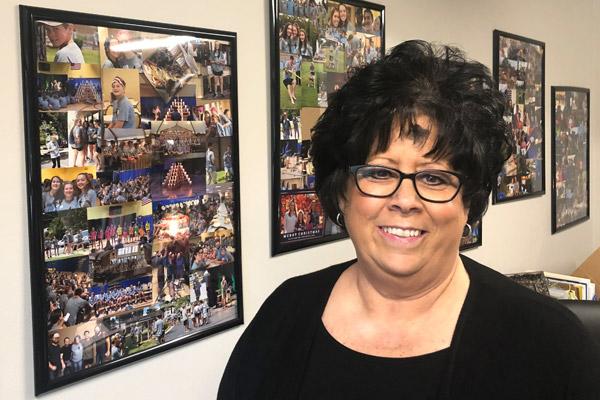 Aprille Hanson
Christie Powell stands with photos of youth she’s mentored for the past seven years as director of youth ministry at Immaculate Conception Church in North Little Rock.

Aprille Hanson
Christie Powell stands with photos of youth she’s mentored for the past seven years as director of youth ministry at Immaculate Conception Church in North Little Rock.

Why you want to know Christie Powell: For 33 years, Christie Powell has been leading Catholic youth. A native of Morrilton, she was asked by three different priests to get involved with youth ministry and turned them down twice — the third time was the charm. She served as a director of religious education at Sacred Heart Church in Morrilton and taught religion and art at the school, her alma mater. She taught art and religion at Immaculate Heart of Mary School in North Little Rock (Marche) for 10 years, while also handling youth ministry and other parish needs. She has served as the director of youth ministry for the past seven years at Immaculate Conception Church in North Little Rock and teaches eight-grade religion at the school. She still lives in Morrilton, making the two-hour roundtrip commute throughout the week and for weekend Mass.

Family: husband Mickey, married 38 years; four children; and five grandchildren, with one more due this summer.

What feeds you spiritually?
To my advantage, I have the commute and that is my prayer time. I do a rosary in and a rosary out. It’s my quiet time. Everybody says, ‘How do you take that commute every day’ but when I started commuting I just took it as a blessing and I just use that time as my time.

How has your faith grown by leading youth ministry?
You know the cool thing about it is whenever you share your faith it makes you stronger. And when you teach it, you’ve got to know what you’re talking about so I have to study and prepare … Especially with things going on in the Church recently or politics or the world, culture; the culture tries to define our kids and I just have to make sure they’re defined by their faith.

What is the most fun activity you do with the youth?
We are a very service-oriented group. So whenever there’s an opportunity of service we’re all over it. The Christmas Caravan, we’ve taken that over the past several years and it’s morphed into this huge event, but it’s exciting. Every summer we go to an Alive in You service camp, which is a different city every summer, and we’ll spend a week there working with whatever the needs of that community are … I have Youth Fest, which kicks off our new year ministry. Last year we had over 200 kids just for our one-day kick-off. I get a band in and music, we have games and talks. And at the end of the day we have a holy hour and Mass and then we have a big concert at the end. That’s fun; it gets them excited for the new year.

You lead about 60 junior high students (sixth-eighth grade) and about 20 senior high students (ninth-12th grade) regularly. What can you say about the faith of young people?
What I see is that their faith sometimes is stronger … I see it so many times, they get involved in youth ministry and they get involved in their faith and they’re all excited and then when they go home sometimes they’re not on the same page. I also see where our kids have brought their family back to church. I’ve seen that several times. … My job is to keep that fire burning. I see it change their families. I have more faith in our teens and what’s coming up. If they stay on the path they are, we’re in good hands.

You are the chairwoman for the Christmas Caravan, which passes out toys and clothes to those in need in Little Rock. What moments at the caravan have touched your heart?
One time one of my (ministry) kids we were serving the poor there and he didn’t have his shoes on and I said, ‘Where are your shoes? He said, ‘Well, I gave them away.’ … You can’t teach that. Then I had another one do the very same thing, not only gave his shoes but gave his jacket. I had one woman in our group, she found a woman that had no socks. She sat there and took off her socks and physically took that woman’s shoes off and put her socks on her. You can’t teach that. That’s what drives us, we can do more.

What is something not a lot of people know about you?
I feel like what you see is what you get with me, I’m a pretty open book … but I hate getting up in front of people, I hate it with a passion. This is really a challenge for me to talk to you because my insides are just like (knotted). … The Lord has a sense of humor. It’s like that duck swimming on the water that looks calm on top but underneath he’s going like crazy.