Bentonville swimmer driven to make her mark on sport 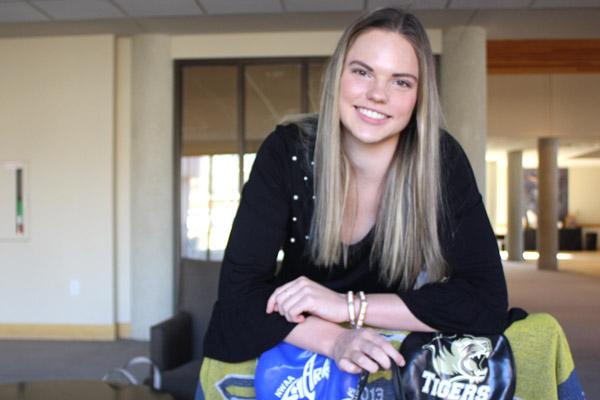 Alesia Schaefer
Madeline Marks started out in gymnastics and ran on a champion cross-country team, but now has both academic and athletic scholarships to swim at Ohio University in Athens.

Alesia Schaefer
Madeline Marks started out in gymnastics and ran on a champion cross-country team, but now has both academic and athletic scholarships to swim at Ohio University in Athens.

ROGERS — One could say Madeline Marks flipped from gymnastics to swimming in one day.

It happened when she was 8 years old and attending an end-of-year swim party with her gymnastics team. While the girls were racing one another in the pool, Marks was several strokes ahead of them. Even her gymnastics coach recommended she consider swimming.

Little did she know that the very next day, she was scheduled to try out for the Northwest Arkansas Aquatics Sharks swim team.

Since that day, Marks has been included on most every heat sheet in swim meets around the state. Now 18 years old and a senior at Bentonville High School, she shows no signs of drying off and throwing in the towel.

“I have always loved being in the water with my friends. As I grew older, I realized I had some potential which kept motivating me to continue.” Madeline Marks

On National Signing Day in November, Marks signed to swim with Ohio University in Athens. She received both an athletic and academic scholarship to swim at Ohio’s oldest university with a 31-member, all girls team beginning this fall. Marks chose Ohio University because of the coach, team and location.

“Most of my family lives in Ohio and Pennsylvania, so the choice to live in that area was a no brainer,” she said. “When I visited I fit right in with the team and knew that is where I belonged.”

Coach Mark Gole, her coach since September, believes it is a high level of commitment that sets Marks apart as a swimmer and has prepared her for swimming at the collegiate level.

“Her commitment level doesn’t just stop with getting to practice,” he said. “It goes beyond the pool with how focused and driven she is in all aspects of her life. She has goals and commits herself fully to achieving those goals.”

That motivation, coupled with hard work and a healthy dose of talent, has served Marks well during her swim career. She has racked up titles both on her high school and club teams. Marks was Swimmer of the Year in 2012 and has been on three state championship teams at Bentonville High School from 2016-2019 and been named All Conference and All State as well as serving as a high school team captain this year. For her four years in high school she has been named Arkansas High School Individual State Champion and she was a Junior National Qualifier from 2016-2019 and a Tyr Pro Series finalist.

“I have always loved being in the water with my friends,” Marks said of her decade of swimming. “As I grew older, I realized I had some potential which kept motivating me to continue.”

And continue she has. Primarily a distance swimmer, Marks said her favorite stroke is the butterfly, with her favorite event being the 200 Fly. But, beyond college, what keeps Marks in the water is an even bigger dream.

“I’ve always had the dream of qualifying for the Olympic Trials and I’m hoping I can make that dream come true in 2020,” Marks said.

The rigors of two practices a day, one before the sun rises and the other after the last bell rings at school, have left Marks with little time outside of the pool. Logging anywhere from six to eight miles a day in the water, with dry land workouts that include weights and running, Marks said sleeping and eating and keeping up with her academics are her top priorities to maintain this level of training.

When she does get out of the water, Marks enjoys hanging with friends and helping with Edge and Life Teen at her parish, St. Vincent de Paul Church in Rogers. As with anything Marks sets her mind to do, she takes it to the next level. Last year she decided to run the Bentonville Half Marathon and placed first in her age group. She was approached by the coach at BHS about running cross country during the fall of her senior year and then qualified to attend the state meet with the nine-member girls’ team where she contributed to her team winning the state championship.

Marks also credits her faith life with helping her stay focused on her swimming goals.

“Like anything in life, there are ups and downs,” she said. “But with everything I’ve learned about my faith, I know that as long as I trust in God’s plan, he will get me through the ups and downs. Swimming is a really hard sport. I train for 20 hours a week, all season in hopes of dropping a half a second in my events at the end of the year.”

Her parents, Laura and Dale Marks, said their daughter’s deep devotion to Christ came from her Catholic upbringing and eight years of Catholic school at St. Vincent de Paul School.

“The walls in her bedroom are a display of Bible quotes and her Bible is tattered and well loved,” her mom said. “Although she is quiet and humble, her belief is once again demonstrated when she quietly makes the sign of the cross pre-race and says a quick prayer.”