All for one: Ozark completes a memorable first season

Winning record was not expected, but teamwork, supportive coaching made it happen 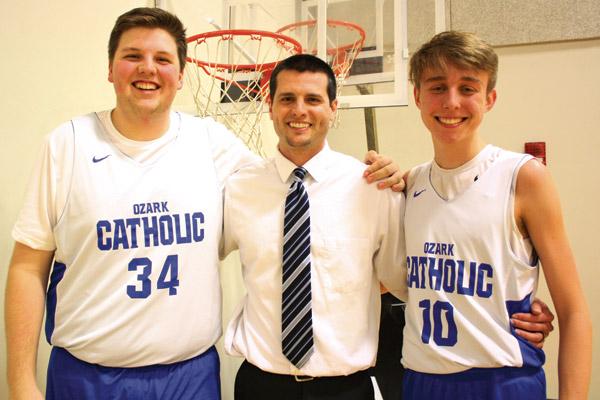 If the inaugural season of Ozark Catholic Academy’s basketball program is any indication, God is a Griffins fan.

The little squad that didn’t even have a gym when practices started — heck, they didn’t even have numbers — finished the season with a 14-5 record and all the tools for the future firmly in place.

“It was just pray every day,” said Cody Vaught, head coach and athletic director for the independent Catholic high school in Tontitown that opened last fall. “You pray for success and guidance because there’s not much hope. You just have to trust in the Lord that he is going to provide for you.”

Coach may have had God’s ear, but players and facilities were another story. Standout sophomore power forward Matthew Moix pulls no punches recalling his initial assessment of the ragtag program.

“Early practices, before we could get a real gym, we actually went to a park that’s close to the school that had a half court outside. We practiced on that for two or three weeks,” he said. “People were just like ‘What are we doing? This is crazy. Is this even going to work?’”

Players were just as hard to come by for the games against other small private and public schools in the area. Only five boys initially turned out for the team, casting serious doubt on whether things would even get off the ground. Ultimately, the team assembled a patchwork cast that rivaled the Bad News Bears.

“We ended up, one of the students at the school, two of her friends are home-schooled and they can play. They’re very good athletes. They’re starters,” Moix said. “We had a seventh-grader who is the little brother of one of our girls’ basketball players. You look at our five starters, two of them don’t even go to the school.”

Moix likes to tell the story now as fuel for the Griffins-against-the-world narrative, but at the time he confesses not being amused. He’d just finished a successful season at a public school where all of the expected amenities — like a full-sized court shielded from the elements — were his for the asking. But as things went along, adversity only served as flux, welding the squad at its seams.

“Coach always told us for him, it’s not about wins and losses and it shouldn’t be for us either,” Moix said. “He doesn’t care if we go 20 and 0. Our first game was a really close game with one of our rivals. We ended up losing by two, and I think we surprised ourselves in how well we played.”

“Coach Vaught’s biggest thing is, getting better is our main goal,” chimed in Isaac McClinton, sophomore starting point guard. “I would say we accomplished that because in the beginning of the year we were getting beat by some teams that we played again and we won against them later in the season.”

True to the Griffins story, McClinton, a 6-foot gym rat, had never played point guard in the 12 years or so he’d been in organized basketball. But his tangible leadership qualities made him the obvious choice for the role, Vaught said.

“Isaac’s a great point guard-type player and I knew with some work he could become a leader of our team because he just has high character,” he said. “You just talk to him for five minutes and you know that.”

The Griffins reached Christmas break at 5 and 4 but Vaught’s system was already starting to gel. The team wasn’t getting destroyed like a lot of first-year programs and Coach’s steady drumbeat of improvement and hustle every game started to pay dividends.

“I almost got out of coaching because I cared too much about winning,” he said. “That was around the time my dad passed away from brain cancer. I realized I needed a different perspective because you can’t always win and if that’s the ultimate goal, then you’re not only treating the kids the wrong way but you’re treating yourself the wrong way.”

Not everything about the “new” Coach Vaught is kittens and candy sprinkles. It’s just that he places his highest demands on the things that matter most.

“Coach Vaught, from the beginning of the year his philosophy is he wants to coach and play basketball the right way,” Moix said. “Look him in the eye when he’s speaking to you, answer ‘Yes sir, no sir,’ and all that kind of stuff that people don’t really care about on the court. That’s what’s brought our team together and got us the respect for each other that we have.”