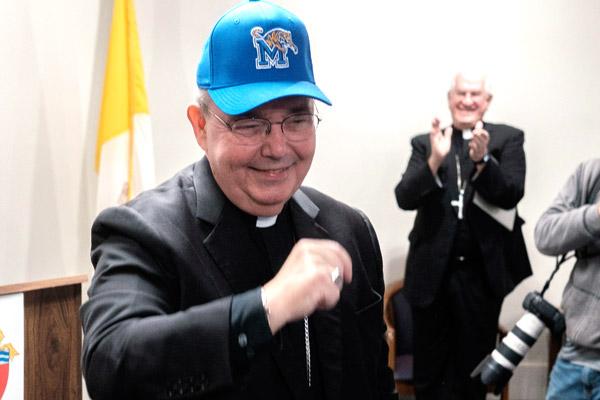 MEMPHIS, Tenn. -- Bishop David P. Talley, named by Pope Francis March 5 to be the next bishop of Memphis, said that being at a news conference on the day of his appointment marked his fifth visit to Memphis.

Students at Our Lady of the Holy Souls School in Little Rock are excited at the prospect of candy thrown during the school’s Mardi Gras parade March 5. (Photo)

WASHINGTON -- Four Catholic Relief Service staff members on their way to a training session in Nairobi, Kenya, were among the passengers aboard an Ethiopian Airlines flight that crashed moments after takeoff in the east African nation.

The St. Joseph Middle School sixth-grade Boys Pee Wee basketball team won the District Tournament at Hector. The Bulldogs of Conway beat the host Hector Wildcats in overtime by a score of 15 to 12. (Sports briefs)

Ever been the only one of your race at a gathering of people? Or the only one who did not speak or understand the language being spoken around you? Or ever attend a religious or worship service different than your traditional way of worshiping? (Understanding our Church, Seeds of Faith)

Who inspires you spiritually?

“My spiritual inspiration comes from my grandparents, Janet and Vito. They tell me to move on with struggles in my life. They are both deeply faithful and love ...” (Youthspeak, Seeds of Faith)

Our U.S. Congress is OK with intentionally killing a child

Catholic philosopher Peter Kreeft once found himself arguing with an abortion supporter, and said to her: “Give me one argument that defends abortion that doesn’t also defend infanticide.” (Columns)

Vatican diplomacy will be productive

In a country where more than 70 percent of its residents are Catholic, we believe Pope Francis will be useful in securing a peaceful resolution in Venezuela. (Editorial)