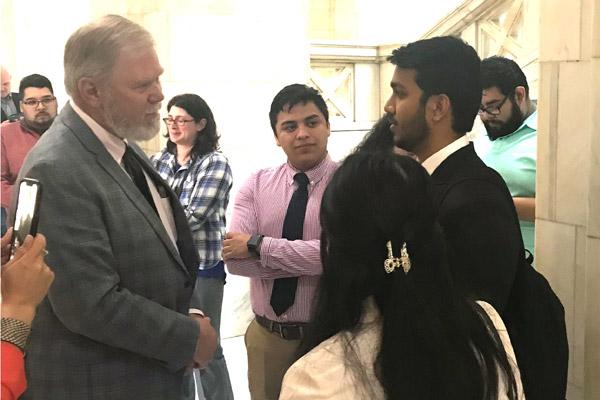 The 2019 legislative session was a champion for traditional respect life issues, namely abortion, but failed to uphold a consistent ethic of life regarding the death penalty. Issues involving physician assisted suicide, gun issues and contraceptives were struck down, while greater relief was given to DACA students pursing higher education.

Legislators succeeded in passing more restrictions and regulations on abortion, including banning most abortions beyond 18 weeks gestation.

Respect Life Office director Catherine Phillips said Act 953, was a proud victory for the state, ensuring that families are given information about perinatal palliative care when they are faced with a diagnosis that their unborn child will likely die after birth. Women are often told to either have an abortion in this instance or wait for the child to die outside the womb.

“I think it’s one of the more fantastic bills that was passed,” Phillips said, commending Rep. Clint Penzo, a member of St. Joseph Church in Fayetteville, who proposed the bill. “… Perinatal palliative care is a life-affirming and practical response when a family faces an adverse prenatal diagnosis … it gives time for the family to have precious moments to cherish that life.”

Act 700 requires abortion providers explain to women in writing that a drug-induced abortion can be reversed. It requires abortionists to explain the procedure and medical risks along with the availability of medical assistance and child-support rights 72 hours instead of 48 hours prior to an abortion, according to the Associated Press.

Death row inmates were not given a reprieve. Act 810 allows more secrecy involving drugs used to kill inmates on death row, prohibiting the state to identify the supplier or manufacturer of lethal execution drugs.

“Whether one is a proponent or supporter of the death penalty, as tax-paying citizens of the state of Arkansas, we have a right to know about government operations, particularly when those operations involve important things and how our money is spent,” Patrick Gallaher, executive director of Catholic Charities of Arkansas, said. “To cloak executions in secrecy violates our citizens’ right to know.”

HB1494, which would have prohibited the death penalty for the mentally ill, was rejected. It defined the active symptoms of serious mental illness to include “delusion, hallucination, extremely disorganized thinking, mania or very significant disruptions of consciousness, memory and perception of the environment.”

In regard to guns, HB1059 which would have allowed the use of deadly force in self-defense in public even in cases where they could have retreated, commonly known as Stand Your Ground, was stopped and SB484 also was voted down in the Senate Judiciary Committee in March.

Sen. Stephanie Flowers’ passionate response to discussion regarding the legislation on the senate floor went viral, viewed millions of times online as she emphasized the legislation would put black boys and men in danger.

Protection for the disabled and elderly was emphasized when HB1536 allowing physician-assisted suicide was “crushed,” Gallaher said, in committee. It is currently legal in jurisdictions in California, Colorado, District of Columbia, Hawaii, Montana, Oregon, Vermont, Washington and most recently in New Jersey, taking effect in August.

Gallaher said the legislation is “rife for abuses … The concept of a right to die quickly becomes a concept of a duty to die.”

Phillips said a public awareness campaign would be beneficial because this legislation will likely appear again.

“They call it ‘death with dignity’ and it’s language designed to be persuasive and unfortunately unless we really understand how that goes against the dignity of the human person, unless we understand the teachings of our Church and faith, we can be persuaded by that language,” Phillips said. “Nobody wants to watch a loved one suffer but that’s why we expand palliative care.”

In other suicide legislation, Act 962 stated it is unlawful to encourage, defined as “persuade, incite or urge” another individual to commit suicide, making it a class D felony.

A long-awaited victory came for Deferred Action for Childhood Arrivals recipients, when Act 844 allowed those on DACA, also called Dreamers, to be eligible for in-state tuition at Arkansas state colleges, as well as foreign nationals. Requirements are that the students must have lived in Arkansas for at least three years and graduated from an Arkansas high school.

Kevin Azanza, 21, a junior with a double major in communications and political science at the University of Arkansas, could finally feel relief after learning in high school that he would have to pay almost three times what other fellow Arkansas students had to pay for college, despite living in Arkansas since he was a year old. For perspective, students in bordering states are generally allowed in-state tuition.

“It was just a mix of emotions of everything. It was something I didn’t expect was going to pass,” he said, adding that it didn’t pass through committee in the 13 years it has been proposed. “It was a flood of emotions, both tears of joy and tears of like finally.”

Azanza, a parishioner at St. Vincent de Paul Church in Rogers, worked extra hours, his mother worked extra shifts and his father worked out of state to help him achieve higher education. Azanza and other Dreamers are still not able to apply for any state or federal aid and scholarships.

“Now instead of taking six hours, maybe they can do a full load of 12 or 15 hours and keep moving forward. It’s exciting, it’s about time,” she said.

Other immigration legislation included the passage of Act 837, which allows DACA recipients who graduate from a nursing program to be licensed to practice in Arkansas.

SB620, proposing a pilot program which would have provided scholarships to low-income families in Pulaski County to attend a nonpublic school from kindergarten through college, did not make it out of committee. SB539, which would have created a tax-credit scholarship program, limited to $3 million a year, was stopped in the House Education Committee.

Theresa Hall, superintendent for Catholic Schools, said there’s hope for the future and the National Catholic Educational Association is planning to work individually with states to discuss voucher systems.

“I don’t think it’s going to be totally off the table; I think it’ll come back. I think they have to really work out the logistics of everything. If it does end up passing, it will end up helping our schools,” Hall said.

Arkansas became the only state in the country to not ensure safe, habitable housing for renters, with Gallaher emphasizing that the “landlord interests are still very strong in the state.” HB1410, which would have established rental habitability standards and requirements for remedies by landlords, did not pass.

“We are the only state that does not have an applied covenant of habitability. That says that when the landlord initially rents the property, the property is safe and clean to live in,” Gallaher said. “Here in Catholic Charities, we’ve had people come to us for help paying their monthly gas bill because there’s a leak in the gas line and the landlord won’t fix it.”