Duo worked together while serving on Diocesan Youth Advisory Council 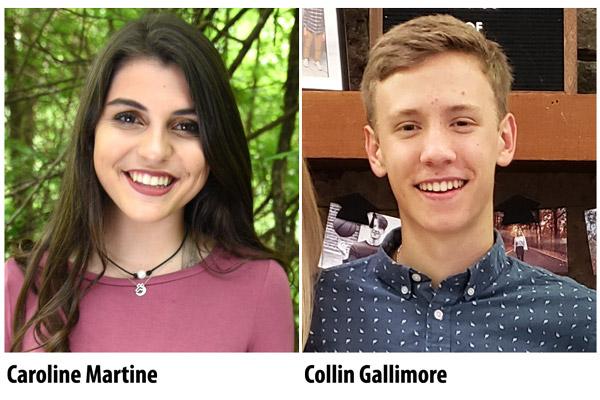 HOT SPRINGS — Two friends who are members of the Diocesan Youth Advisory Council were awarded the St. Timothy Award, the highest honor the diocese bestows on graduating high school students.

“It was really unexpected. I didn’t see it coming. It was the biggest honor I have ever received,” Gallimore said.

“I was very honored and humbled by it,” Martine said. “To me this is a big deal to be recognized and that they thought of me as someone who is qualified to receive this award.”

“Whatever you do, you keep God in the center of your life.” Caroline Martine

The application for the award says the recipients are recognized because they live as a disciple of Christ by setting a positive example for others, exhibit Catholic morals and integrity, provide service to others and are Christian leaders.

Martine, daughter of William and Audrey Martine, will graduate from Mount St. Mary Academy May 20 and will attend Auburn University, majoring in exercise science.

“Be just like St. Timothy. Whatever you do you keep God in the center of your life,” Martine said. “When you are in trouble and going through some hard time, keep close to the Eucharist. Whenever you see someone who is in need or have lack of faith you should help.”

“When I think of Caroline Martine, I immediately respond ‘Catholic to the core.’ She has integrated her faith into every part of her being,” Ridgeway said. “She models to her family, peers and adults what it is to be a Catholic Christian in a world that sadly portrays our faith so negatively.”

“The beauty of her face reflects the beauty of her soul. Having known Caroline for 18 years, she has consistently exemplified her devotion to the Lord and his Church. Our CYM program has been so blessed having had her as a member, a leader and a true disciple of Jesus Christ.” Msgr. Francis I. Malone, pastor of Christ the King Church in Little Rock wrote.

Martine said she serves on the Christ the King Youth Advisory Team.

Gallimore, son of Steve and Mary Gallimore, will graduate from Christian Ministries Academy May 17. He will attend the University of Central Arkansas Honor College as a broadcast communications major. He and his family attend St. Mary of the Springs Church in Hot Springs.

Gallimore serves as co-chair of the diocese’s Youth Advisory Council and works on the multimedia committee, which helps develop videos for parishes in the diocese and audio-visual services the Catholic Youth State Convention.

“I’d begun spending some personal time with the Lord,” he said. “Once you hear his voice you know him and you will know what to do. It’s all about listening to the Lord, and you should go exactly where he tells you to go.”

“Collin exhibits the best example of what it means to be a true follower of Jesus Christ,” said Sally Pierce, St. Mary’s youth director, who recommended Gallimore for the award. “Who else brings their Baptist friends to Catholic youth functions?”

Gallimore has produced the video for St. Mary’s 150th anniversary this month and he helped develop the logo for the event.

“Collin is active in ministry as an altar server, audio/visual tech and is a leader in our youth group and youth band,” said Father George Sanders, St. Mary’s pastor who also recommended Gallimore for the award.