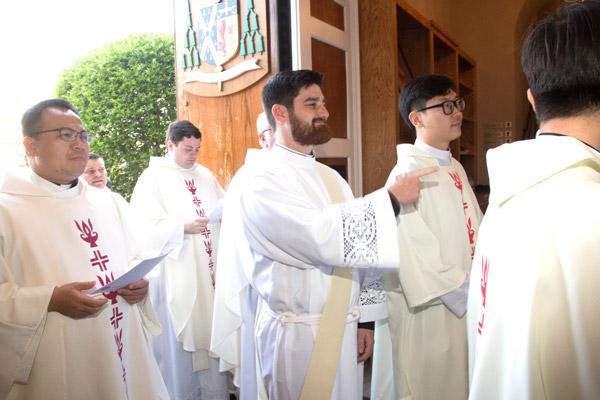 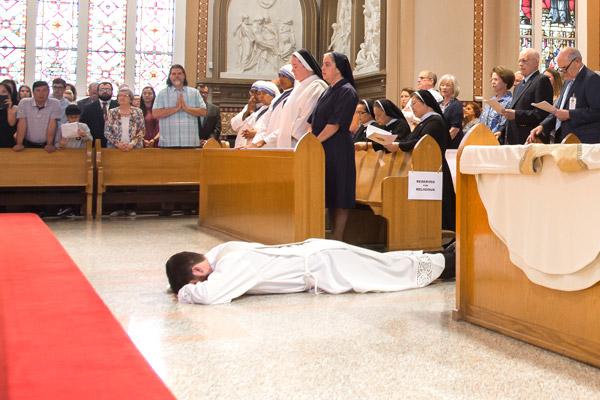 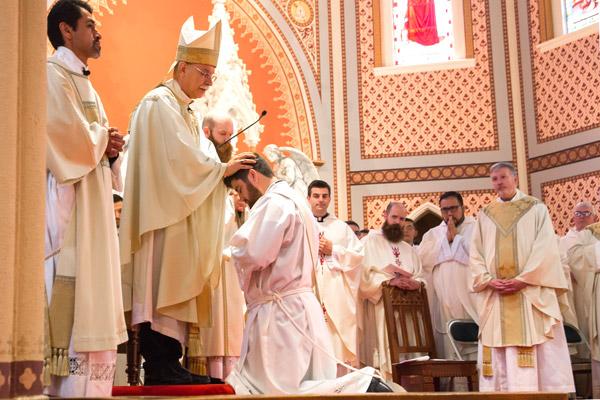 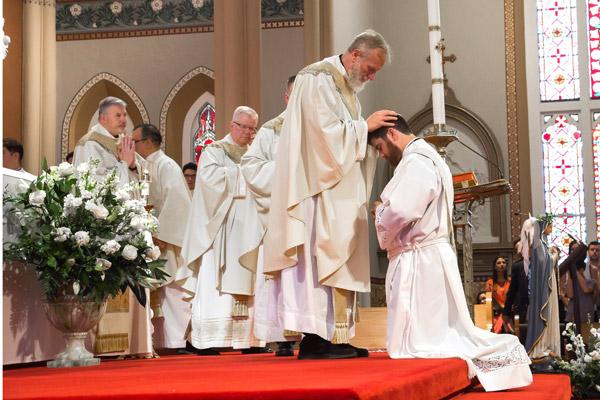 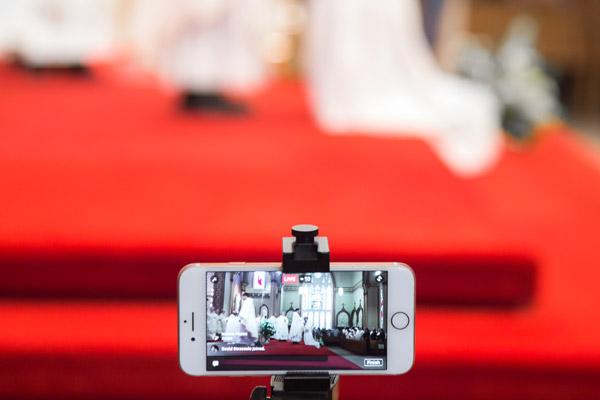 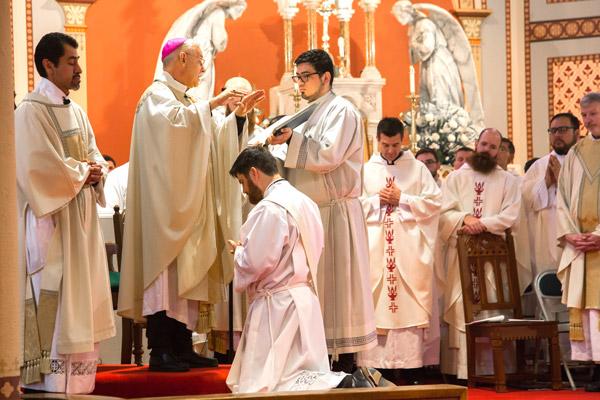 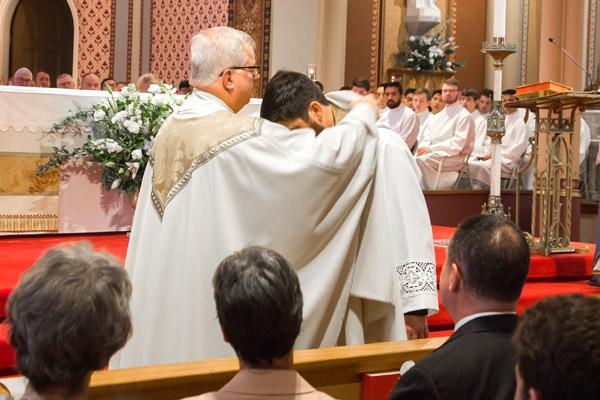 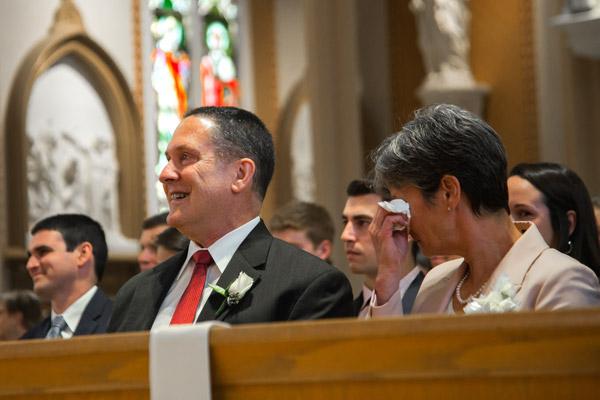 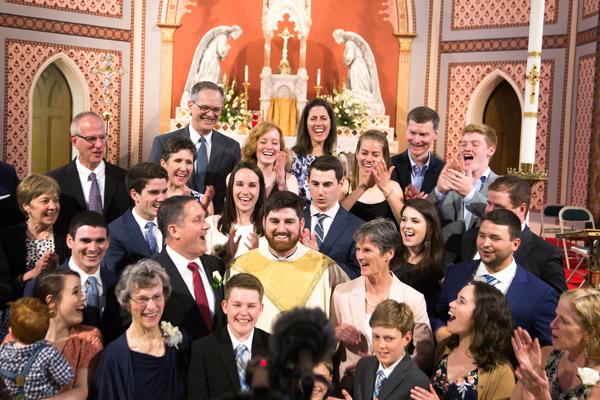 Bob Ocken
The extended family of Father Jon Miskin cheers for him after the ordination Mass May 25 at the Cathedral of St. Andrew in Little Rock. Another camera captured their excitement on video for the Taste of Faith fundraiser project.

Bob Ocken
The extended family of Father Jon Miskin cheers for him after the ordination Mass May 25 at the Cathedral of St. Andrew in Little Rock. Another camera captured their excitement on video for the Taste of Faith fundraiser project.

As cathedrals go, the Cathedral of St. Andrew in downtown Little Rock isn’t all that big. In fact, it’s not even the largest church in the city, not by a long shot. But for atmosphere, there’s nothing grander than the cathedral packed to the rafters while the splendid pipe organ anoints the faithful below.

And so did the oldest continually-operating house of worship in Little Rock put on her finery May 25 to usher Jon Miskin into the ranks of the priesthood.

“I made a couple of comments to some of the guys that I knew, who were ordained in the Cathedral,” said Miskin who grew up in Christ the King Church across town. “I was just thinking forward to the Chrism Mass when I’ll be standing right there again, renewing my promises to the Church and to the bishop.”

“I’ll just be standing there in the sanctuary looking to the very spot where it all began. I was just kind of hit by that realization that this is the place where, throughout my priesthood, I’ll come back to be renewed and be rejuvenated.”

If his ordination Mass is any indication, he won’t be here alone very often. Miskin’s family of three brothers, two sisters and other relatives filled several pews to the right of the aisle up front. They smiled and wept their way through the bilingual ordination Mass, led by parents Mike and Anne Miskin of Illinois whom Jon credited with being his “first example of unconditional love.”

“Everybody’s heard the phrase, ‘Bursting with pride,’” Mike said. “Until today I really thought that was just a quaint phrase. My heart’s going to burst out of my chest today. It’s so humbling and we’re so excited for Jon.”

Anne Miskin pointed out her mother predicted one of the family’s sons would become a priest, but admitted she pegged the wrong one for a collar. As for the family prognosticator herself, she downplayed the prediction.

“It was a hope,” said Helen Moffett, Jon’s grandmother.

For the first half of the ceremony, Father Miskin appeared somber and nervous. Bishop Anthony B. Taylor’s homily charged Miskin to a vocational life beyond reproach.

“As you begin your priestly ministry, I urge you to revere the people you serve,” Bishop Taylor said, looking directly at Miskin. “The Church in Arkansas needs priests who lead by example, who revere the spiritual and ministerial gifts of those Jesus sends us to serve.”

After Mass, Miskin pondered how he saw himself and his relationship to others now as a priest.

“You become Father in a day. Everything kind of changes, but those relationships in many ways remain the same,” he said. “Some of those priests that I have looked up to and tried to emulate my own fatherhood to, they will always be a father to me. There’s other priests and seminarians I went through seminary with and they will always be a brother to me. I’ll look to them in a similar way, I imagine, going forward.”

As the Mass drew toward its conclusion, he was afforded one more opportunity to engage his first family. Stepping in front of the front pew, he scanned their faces and waved them all to the front where they huddled in a tight circle to receive his first blessing.

“It kind of just happened in the moment,” Father Miskin said. “I have a big family and they were kind of all around. I wanted it to be something more intimate than a separation of the pews. It seemed that they were far away when I walked down; we just needed to be closer together for that moment. It worked out so beautifully.”

Father Miskin’s first assignment will be as an associate pastor at St. Raphael Church in Springdale, starting June 12.