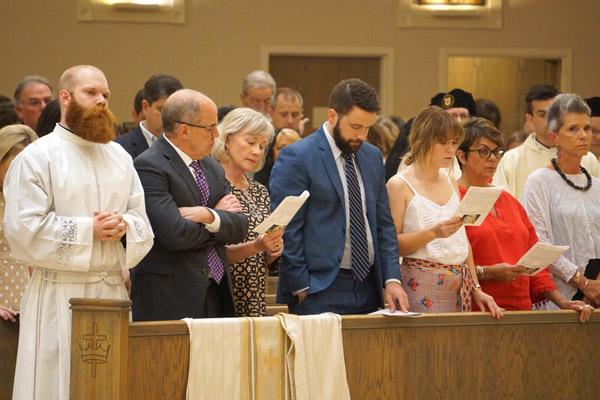 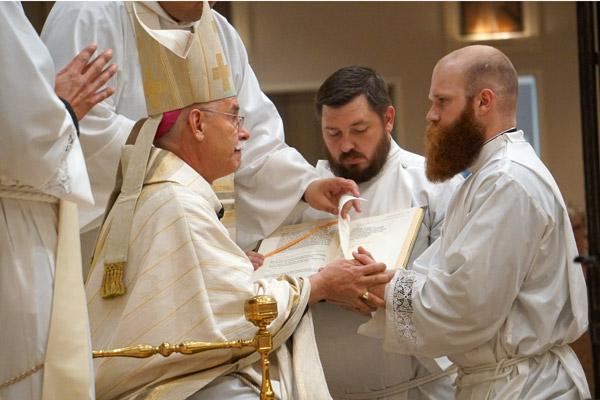 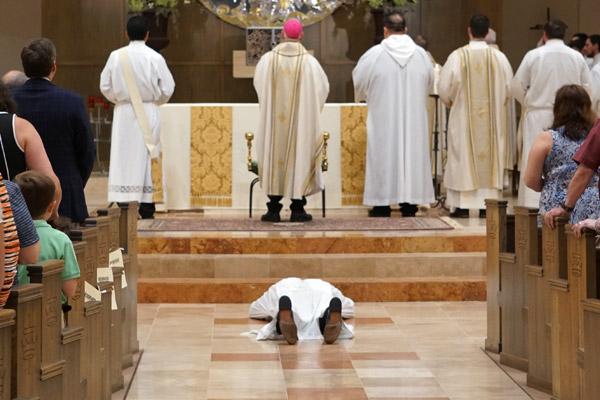 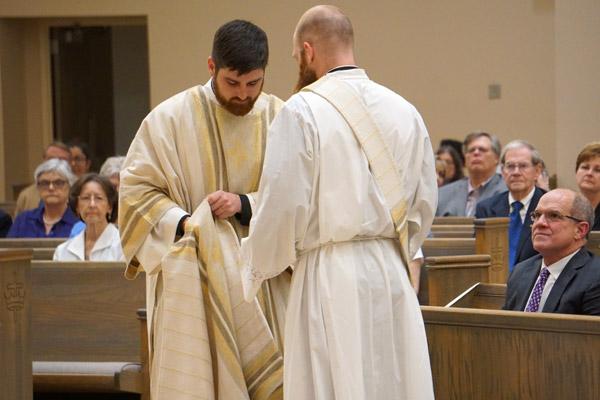 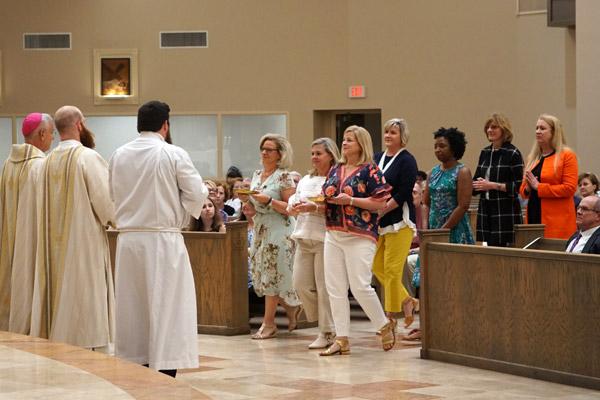 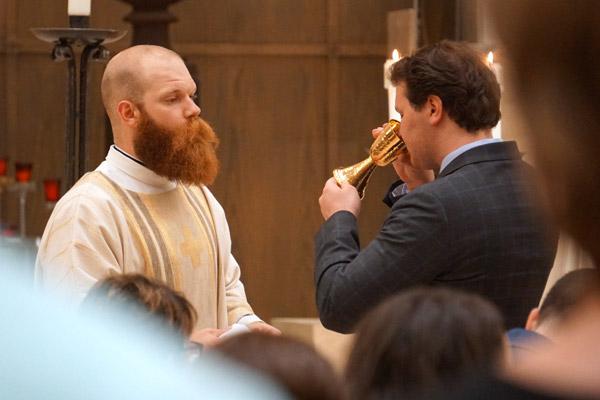 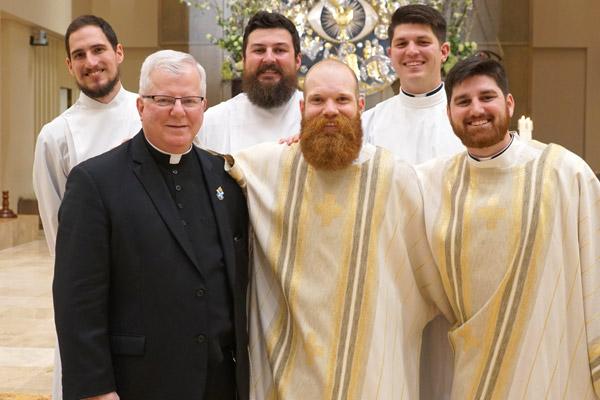 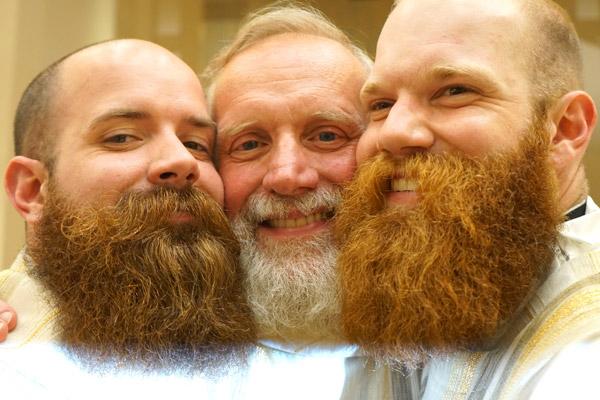 Friend’s older brother Father Patrick says, ‘This is who God wanted Joe to be’ 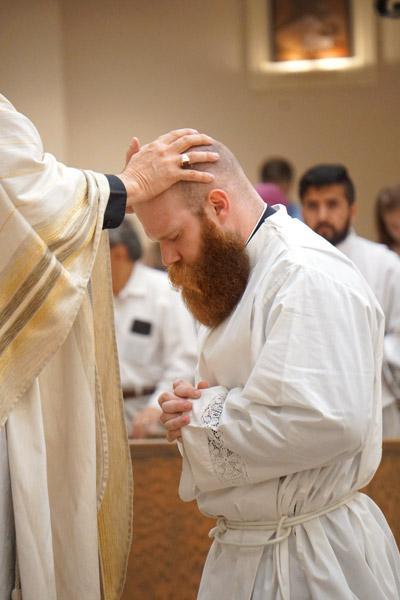 Malea Hargett
During the ordination rite May 22, Bishop Anthony B. Taylor lays his hands on Joseph Friend, receiving the strength of the Holy Spirit for the call as a deacon.

Malea Hargett
During the ordination rite May 22, Bishop Anthony B. Taylor lays his hands on Joseph Friend, receiving the strength of the Holy Spirit for the call as a deacon.

The legacy of Betty Friend continued with the diaconate ordination of a second son May 22 at Christ the King Church in Little Rock.

As she was dying from cancer in 2013, she spoke to Bishop Anthony B. Taylor, telling him, “I trust my sons with you; I am placing them in your hands. Take care of my boys.”

Calling it “one of my most moving experiences these last 11 years as your bishop,” he said he knew Betty Friend had great faith and now he knew she had great faith in the Church as well.

“She was really giving her sons to the Lord in his Church. Except that they had already beat her to it. Both Patrick and Joseph were already in the seminary,” he said.

Less than a year earlier, in 2012, both of her sons had joined the seminary. Her oldest son Patrick was ordained a priest in 2018 and serves as a chaplain at Catholic High School in Little Rock.

The youngest son, Joseph, was ordained a deacon by Bishop Taylor during a Mass witnessed by his pastor, father and stepmother, sister, extended family and former teachers from Christ the King School and Catholic High School.

While Betty was not physically present at the Mass, her closest friends were there to bring up the gifts during Mass. The seven women represented the group known as “Betty’s Angels” who cared for her when she became ill. Of the women, Joseph Friend said, “They each hold a characteristic that reminds me of my mom.”

“In my life what we went through with my mom suffering cancer, we experienced so many friends and family members that stepped up to the plate and served. They taught me what it means to serve,” he said. “They didn’t do it with any sort of pride or do it to receive something. They did it sacrificially. That is what true love is. That is how Jesus Christ loves us … That is how I want to love.”

During his homily, Bishop Taylor said, “I know that your mother is looking down on you with much pride and satisfaction today as she sees the seed of faith that she and your dad planted and nurtured all those years blossom in your life and give such glory to God.”

Another person who was missed at the Mass was the late Daniel Phillips, who was also accepted into the seminary in August 2012. He was killed during a car wreck five months later.

“He should have been ordained with me this summer,” Joseph said.

Another person of importance for the 25-year-old deacon is the diocesan vocations director. He carries the middle name Scott in honor of his uncle, Msgr. Scott Friend, who was also a mentor to him for the past seven years of seminary formation.

The biggest fan of Deacon Joseph Friend seemed to be his older brother, Father Patrick Friend.

“I don’t care how old you are, your little brother is always your little brother,” the priest said. “You are never ready to see your brother stand up in the vestments of a deacon. I am just so proud of him … This is who God wanted Joe to be.”

During the diaconate ordination, Friend made promises of celibacy, a life of prayer and obedience to the bishop. As deacon, he can now proclaim the Gospel and preach during Mass, administer baptism, distribute Communion and preside over funeral services and act as an official witness at weddings.

Friend will serve this summer at Sacred Heart Church in Morrilton and return to St. Meinrad Seminary in Indiana in the fall for his final year of studies.