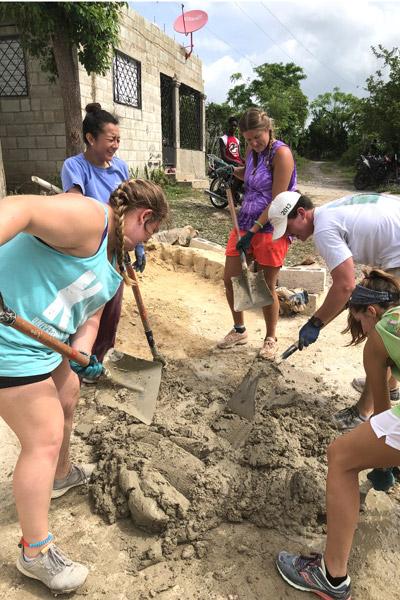 University of Arkansas students, on a mission trip to the Dominican Republic, work on building a house for an employee of NPH. Students mix each batch of concrete by hand.

University of Arkansas students, on a mission trip to the Dominican Republic, work on building a house for an employee of NPH. Students mix each batch of concrete by hand.

What is the perfect antidote for no sleep and a brain-numbing amount of studying? Heading somewhere tropical, of course.

So that’s what these 10 University of Arkansas students did as soon as they finished semester finals.

But the goal wasn’t tanning on the beach. It was serving and working with orphaned and abandoned children and the organization of people that care for them, through the international Nuestros Pequenos Hermanos (Our Little Brothers and Sisters) program in the Dominican Republic.

The group, along with Father Jason Sharbaugh, the new pastor of St. Thomas Aquinas University Parish on the UA campus, spent May 12-18 in the town of San Pedro de Macoris, east of the capital of Santo Domingo, on a settlement situated between migrant sugar cane farmers and professional United States baseball league practice stadiums.

This was the second year that Father Sharbaugh has accompanied students to the Dominican Republic where he, campus minister Adam Koehler and the students volunteered helping and organizing activities for the children of NPH and working on the construction of houses in the village of Casa Santa Ana.

Nick Meyers, a junior finance major, was struck by the joy of the people they encountered, as well as the realization of the many creature comforts and opportunities those in the United States take for granted. One day in particular, stood out in Meyers’ memory.

Despite three days spent on a construction site, mixing concrete and plastering walls in the heat, Meyers said no one complained.

“We had been stooped over shoveling the freshly mixed concrete for a few hours and were frying in the sun and the heat,” he said. “We all just took a moment and looked around, laughed and took in the beautiful scenery. No one complained about how hot they were, no one was in a bad mood, everyone was just happy to be serving and had a smile on their face.”

“It was one of those quick, but impactful moments where you can really feel the Lord present,” said Meyers, a graduate of Catholic High School in Little Rock, about his first mission trip. “It was one of the coolest things I have ever experienced.”

For Mary Kate Wendel, 20, this was her second year to go to the Dominican Republic. She also recalls how each day they were mixing the concrete and helping plaster the walls of a new home for a woman who had lived in a tin hut her entire life.

“It was hard work mixing the concrete in 100 degree heat,” said Wendel, a nursing major and Mount St. Mary Academy graduate. “But to push past my own tiredness and put in hard work that would benefit someone who needed, it was an amazing feeling.”

Deepening one’s faith life is also part of the journey.

“I feel like most of the hard work of a mission trip is done on the hearts and minds of the missionaries,” Wendel said. “To see and experience the love in each person who lives in this poverty and still lives out a God-filled life is inspiring. I feel I got to use the gifts and talents I have in a positive role and God used the people I met to open my heart to enjoy a new perspective on things.”

Father Sharbaugh said mission trips help those being served and those who have come to serve.

“We had such an amazing time together in Mass and reflection time,” he said. “Hearing confessions the night before we left and praying together with our group and with the kids at the mission was powerful.”