‘I love the immigrant community and wanted to help,' sister said following trip 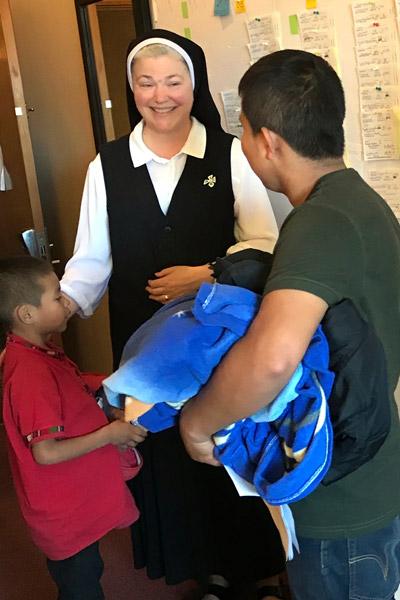 From May 26-June 8, the Benedictine sister from St. Scholastica Monastery in Fort Smith volunteered at Annunciation House in El Paso, a program to assist immigrant families who were released by border security into the custody of family members or sponsors in the U.S.

“Some immigrants were released on their own recognizance, and others wore ankle monitors,” Sister Judith said. “After ICE (Immigration and Customs Enforcement) processed, vetted and fingerprinted all the families who were applying for asylum, the ones who were released were bused to Annunciation House. We fed and housed them, gave them a change of clothing and made arrangements with their families or sponsors to provide bus or plane tickets to their U.S. destination.”

Sister Judith, who works with immigrants at the Family Literacy Program at Pike Elementary School in Fort Smith, learned about Annunciation House through the Sisters at St. Benedict Monastery in Minnesota and the Leadership Conference of Women Religious.

“I love the immigrant community and wanted to help, so I asked Sister Maria (DeAngeli, OSB, who was the previous prioress) if I could go,” Sister Judith said. “I had heard so many stories about the border crisis, and I wanted to be that smiling face who made them feel like human beings, to do what I could. I knew Spanish and was able to take time off during the summer.”

Annunciation House, founded by Ruben Garcia, has been helping immigrants who have crossed the Mexican border since the late 1970s, but the huge influx of immigrants from Guatemala, Honduras and El Salvador has put stress on its physical and human resources. The organization recently rented a warehouse and other facilities. Sister Judith worked at a hotel that has been converted into a temporary shelter. The shelters are staffed primarily by volunteers who serve for one-year stints and student interns who spend 10 weeks in the summer. They survive on donations, many from immigrants who had been helped when they arrived in El Paso.

“Each day about 80 new immigrants arrive at the hotel, so we need to get families off to their destinations in the U.S. after one or two days,” Sister Judith said. “When we show them the map, they are amazed at how much further they will have to travel — as far as New York, California or Miami. Before the families leave, volunteers put together food packages and toiletry bags to sustain them on their two-three-day bus trips and drive them to the bus station or the airport.”

During the asylum seekers’ brief stays at Annunciation House, the volunteers do their best to make them feel welcome, cared for and comfortable.

“All of our residents came with children,” Sister Judith said. “They seemed really tired and wary, hungry and in need of clean clothes and a shower. They didn’t know if they could trust us. The site manager tells them they are not in jail and that they are welcome. We fill out forms, get them clothing and medicine and help them contact their extended families or sponsors in the U.S.

“None of them have shoelaces, even the littlest ones. Their shoelaces are confiscated by ICE, either because they are afraid they would run away too quickly or to prevent them from committing suicide.”

Local churches provide lunch and dinner for the families, and the hotel offers them continental breakfast every day.

“Everyone was so grateful and treated us like family,” she said. “We never had any problems or issues with the residents. Everyone was always willing to help. When I had to make two big pitchers of drinks, I was surrounded by people offering to help me because they wanted to give back,” Sister Judith said. “I met so many good, sweet people there.”

To learn how to help Annunciation House, visit annunciationhouse.org.