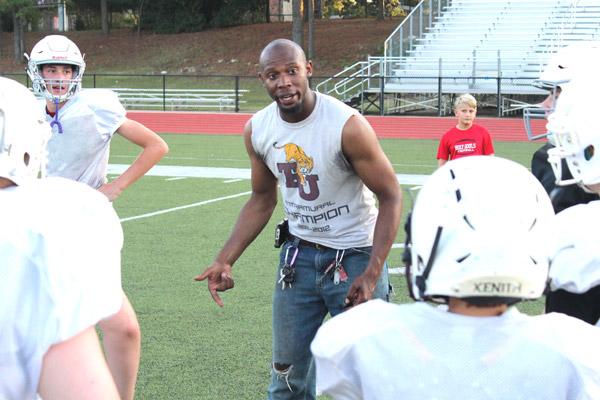 Dwain Hebda
Coach Mike McIntosh doles out the game plan to his eighth-grade starters. McIntosh coached Our Lady of the Holy Souls School before landing the top job with the newly formed Firecrackers football team.

Dwain Hebda
Coach Mike McIntosh doles out the game plan to his eighth-grade starters. McIntosh coached Our Lady of the Holy Souls School before landing the top job with the newly formed Firecrackers football team.

The team kicked off its first season with a home game Sept. 17 against Forest Heights, played at Catholic High School, the Firecrackers’ home field.

It’s late summer or early fall, depending on your point of view, but either way it’s football season. All across Arkansas, young men gather to practice on fields just like the one a few steps from the front doors of Catholic High School in Little Rock. Here, hopefuls run through their paces in preparation for the season’s contests.

Tonight, line after line of middle schoolers run a conditioning drill that doubles as a whetstone for the boys’ ability to stay onside. It’s not going well, and several false starts have lengthened tonight’s running considerably.

“Don’t jump!” wheezes one player at his comrades. “Hold your position!” pants another.

The air is muggy, but Coach Mike McIntosh doesn’t so much as glisten, his ink-black shades adding to his already-imposing stature. He’s the lynchpin of this drill and he’s using every tactic — fair and unfair — to get the boys to jump offsides.

“DOWN! Sehhhht..hut-HUT!” A boy jumps; another round. Next line, Coach blows a whistle. Two boys jump; another round. Third line, no one jumps but three players jog through instead of sprint. Coach barks. The boys line up. After 20 minutes they clog the space around water bottles, some on one knee.

“Right now, I love our defense. Our defense looks really solid,” McIntosh confides. “We have a lot of kids that can play multiple positions and we have depth on our defense.”

“Quarterback, we still have a battle going on there. That’ll be interesting to see how that shakes out.”

Welcome to the Firecrackers, a consolidated junior high football program entering its first season that’s made up entirely of players from Little Rock and North Little Rock Catholic schools. A year ago, this squad would’ve been split into thirds and not come near each other in practice. The old Parochial Football League welcomed teams from any central Arkansas Catholic school (as well as other faith-based squads such as Christ Lutheran School in Little Rock). But in recent years, numbers have dwindled to only three squads suiting up for the 2018 season. That made for poor competition and set players back in their development once they got to high school.

The Firecrackers, by contrast, will compete against public middle schools, promising stiffer competition and an enhanced level of play. It also gives the boys a chance to learn the fundamentals of Catholic High’s system in an effort to cut down on the adjustment required to transition from junior high to high school ball.

“One of the big selling points about (the consolidated team) was getting the kids to learn Catholic High’s system before they get to Catholic,” McIntosh said. “We’re running a high school offense with middle school kids, and we’re teaching it to them in a way where they actually are picking it up.”

The new squad attracted decent numbers in its first year, around 53 boys out for football in seventh- and eighth-grade divisions. The program, officially Central Arkansas Catholic Consolidated as approved by the Arkansas Activities Association, features far fewer restrictions than under the old parochial league rules.

“There’s also not a weight restriction. That has been magical because you always have a kid that’s a little bit bigger or more developed than other kids and he’s not been able to play because of his weight, at least in the league we came from. The running back couldn’t be more than 130 pounds. But this year it’s full-on football.”

McIntosh is a lifer in the sport, playing at every level from pee-wee to semi-pro at wide receiver. After his playing days ended, he looked for a way to stay involved and was invited to help out as an assistant with Our Lady of the Holy Souls School in Little Rock. He quickly moved to the head coaching spot with the Wabbits, a position he held for three years before being tapped for the Firecrackers job. Then, as now, McIntosh — as well as his entire staff — are volunteers.

“We pretty much brought the coaches from the three schools that had the most kids — Holy Souls, Christ the King (Schools, Little Rock) and Immaculate Conception (School, North Little Rock). There’s at least one coach from each of those staffs from last year. All the coaches work together and volunteer here.”

Water break over, the squad splits into offensive and defensive units and run seven-on-seven drills as the sun starts to dip below the grandstand. A gaggle of parents, mainly dads, lounges on the bleachers or lean on the sideline fence. A few younger brothers and sisters noisily run off some pre-dinnertime energy nearby.

But between the lines, it’s serious business. Lining up in the wrong place, dropping an easy pass or just spacing out on a simple assignment earns you a trip to the sidelines and Coach McIntosh’s doghouse. But he’s just as quick to pat a player on the helmet for effort or celebrate a well-executed play.

“It’s a lot of fun. I love the game,” he said. “As much as I can be involved, I’m always going to be involved, doing something with football.”

The team kicked off its first season with a home game Sept. 17 against Forest Heights, played at Catholic High School, the Firecrackers’ home field.