Serving as editor, state representative had a higher purpose for Charlotte Schexnayder 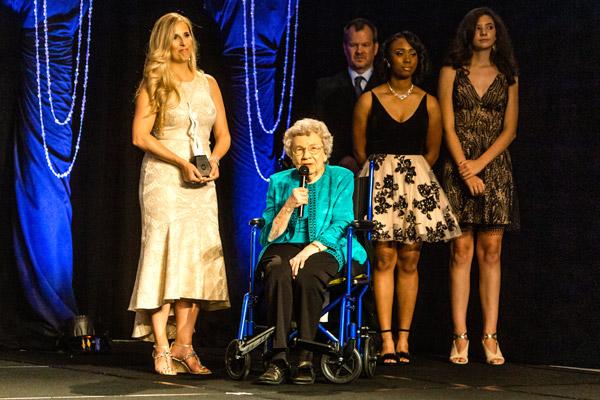 The Dumas Clarion newspaper was more than a compilation of stories. With Charlotte Schexnayder and her husband Melvin at the helm, it was a beacon of hope in a small community.

“A man came in the front office and said, ‘I want to speak to the lady here, the lady editor.’ So they got me and I went up there and he said, ‘Lady, you don’t know me, but I got a problem. My brother died and I ain’t got no suit to bury him in.’ And I said, ‘We can take care of that.’ My family got the suit for him.”

“There were so many opportunities for us to help people in circumstances that were not known to the public. They thought that the paper was maybe their last source of help. We’d have people who were traveling, ran out of gasoline; (we) bought gasoline for them. At times we would buy food for people,” and even cover utilities, she explained to Arkansas Catholic. “… We wanted to tell the town’s story but we wanted to be a source of hope and push for better for everybody.”

At 95 years old, Charlotte Schexnayder, now of Little Rock, was inducted into the Arkansas Women’s Hall of Fame Aug. 29 for her contributions to state journalism and lawmaking. After graduating college in 1944, she became editor of the McGehee Semi-Weekly Times. She and her husband Melvin bought the Dumas Clarion in 1954, owning it for more than four decades. She served 14 years in the House of Representatives, elected in 1984. Schexnayder was a woman of firsts — as the first female president of the National Newspaper Association along with seven other state and national journalism organizations, and the first female president of the Dumas Chamber of Commerce. In 2012, she published a memoir, “Salty Old Editor: An Adventure in Ink.”

But pride isn’t measured by the accolades. It is in the four generations of women in her family present at the Hall of Fame induction. It is in the work she and her husband put into helping establish Holy Child Church in Dumas. It is in each story she penned that bettered the lives of others.

Charlotte Schexnayder converted to Catholicism after being raised Presbyterian, marrying Melvin in 1946.

“I enjoyed that we were a family that could share the same faith,” she said. With no parish, Mass in Dumas was in the home of the local Mayer family.

“For three years we went to their home and every Sunday they moved the living room furniture into the attic to set it up for Mass and that’s how I guess we got three years of raising money to build the church,” she said.

Holy Child Church in Dumas was built in 1967.

Charlotte, as editor of the Dumas Clarion, was not without controversy. They endured personal threats following editorials like one she wrote regarding the 1957 crisis over integrating Little Rock Central High School. Her mother, a teacher, strongly advocated for integration.

“It did not matter if they had anything or had the finest, she treated everybody fairly, very kindly. I grew up thinking that and my husband felt the same way,” Schexnayder said.

When Schexnayder first took over as editor of McGehee Semi-Weekly Times at just 20 years old, a man came in and wanted to speak with the editor.

“I said, ‘I am she.’ And he said, ‘You can’t possibly be, you’re just a girl,” Schexnayder said in a low, direct voice. “I said, ‘Well, unfortunately I am the editor, if you think it’s unfortunate, but I’d be glad to help you,” she recalled.

Her grit carried over to her 14 years as a state representative, fighting for freedom of information, rural development and education.

Schexnayder said some of her best advice for women pursuing careers in journalism and politics is “have a tough skin” and “never abandon your beliefs.”

Today, Schexnayder has severe arthritis and macular degeneration resulting in progressive vision loss. Her husband died in 2007, but she is surrounded by her children, grandchildren and friends.

“Reading a newspaper is not an option for me anymore,” she said, adding, “Even though I can’t read, I listen a great deal.”

In her Hall of Fame speech, she told the crowd she was “speaking out on behalf of freedom of the press, freedom of religion, freedom of speech, freedom of assembly.”

“We have to guard freedom of the press because it’s a keystone of democracy,” she said.

She admitted “it’s very hurtful to me” to see society’s distrust in the media, adding “there is news; there is no false news. False in news are plain lies.”

There’s hope, she said, that as big corporations — which had bought up newspapers mistaking them as “cash cows” — close community papers, someone steps in to save them, most recently in Stuttgart, Helena and Mount Ida.

“I’m really encouraged because people are hungry for local news. If you keep it local, they’ll buy it,” she said.

Comparing the years she served in the Arkansas legislature, Schexnayder said they used to be “kinder to one another” and have more open discussions. It’s up to the voters to be careful on who they elect, she said.

“I don’t think you can go back. I think as we go forward, the people have to place a lot more emphasis on honor. And honor in all aspects in life; that’s what I see has dissipated. You have to have personal honor, you have to have public honor,” she said.

But what ultimately threatens society the most is a “lack of vision,” Schexnayder said.

“Without vision, the people perish. I mean that in the small towns, in the cities and the nation. You can always be better than you were if you work hard enough to do it. And I think we’ve sort of lost this; in the bickering, we have lost a vision of what our country was and what it needs to continue to be.”