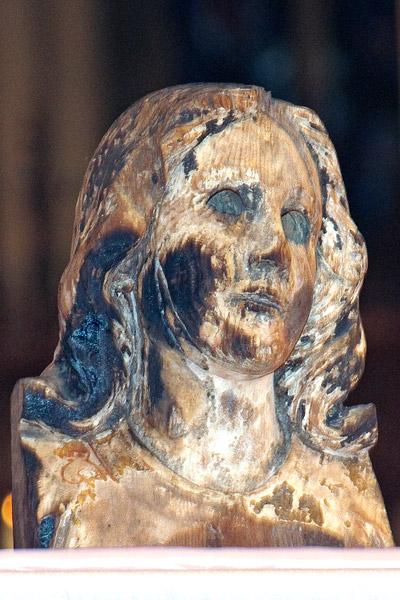 CNS / Bob Reers, Catholic New York
Part of a statue of Mary that survived the nuclear bombing of Nagasaki, Japan, during World War II is pictured in St. Patrick’s Cathedral May 2, 2010.

CNS / Bob Reers, Catholic New York
Part of a statue of Mary that survived the nuclear bombing of Nagasaki, Japan, during World War II is pictured in St. Patrick’s Cathedral May 2, 2010.

Pope Francis has promoted peace during his world travels. Read more of his comments on peace:

VATICAN CITY — Pope Francis’ top aide made no secret of what will be on the pope’s mind when he visits Hiroshima and Nagasaki, Japan, Nov. 24: “the total elimination of nuclear weapons.”

In a late September visit to the United Nations, the aide, Cardinal Pietro Parolin, Vatican secretary of state, spoke repeatedly and passionately about the need to stop manufacturing, testing and stockpiling nuclear weapons.

During his Nov. 20-26 visit to Thailand and Japan, Pope Francis will deliver a message at the “hypocenter” or ground zero park in Nagasaki and will hold a meeting for peace later that day at the peace memorial in Hiroshima.

The U.S. military dropped an atomic bomb on Hiroshima Aug. 6, 1945, and on Nagasaki Aug. 9, 1945. Tens of thousands of people died immediately from the blasts. Japan surrendered to the Allies six days after the bombing of Nagasaki.

Pope Pius XII, who already had expressed concern to the Pontifical Academy of Sciences about plans to develop an atomic weapon, told the academy in 1948 that the “the ‘atom bomb’ or ‘nuclear energy bomb,’ (was) the most terrible weapon which the human mind has conceived to date.”

For decades, Pope Pius’ successors judged the policy of nuclear deterrence to be morally acceptable, but only on the condition that real efforts continued for a complete ban of the weapons.

The position began to change when St. John Paul II visited Hiroshima and Nagasaki in 1981 and noted that despite talk about disarmament, “nuclear stockpiles have grown in quantity and in destructive power. Nuclear weaponry continues to be built, tested and deployed,” making the destruction of humanity “a real possibility.”

People took hope from the signing in 1991 of the U.S.-Russian Strategic Arms Reduction Treaty (START) and from its successor agreement, New START, signed in 2010; but New START expires in 2021 and the Russian government announced in early November that the Trump administration had postponed indefinitely talks to renew the treaty.

Speaking at the United Nations in September, Cardinal Parolin called on the United States and Russia to “take timely action to extend the New START Treaty beyond its scheduled expiration,” and he also asked them to “come back to the table to revive talks” on the Intermediate-Range Nuclear Forces Treaty, which expired in February.

Pope Francis has promoted peace during his world travels. Read more of his comments on peace: