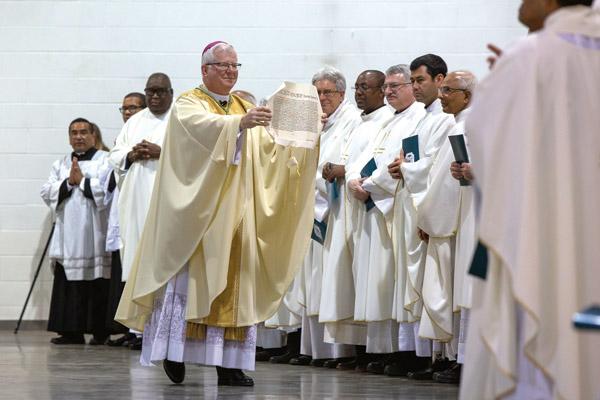 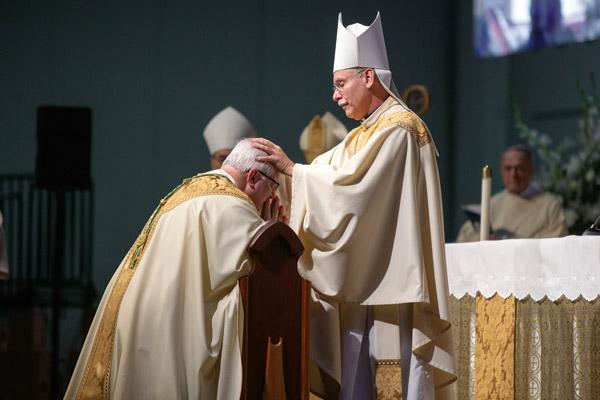 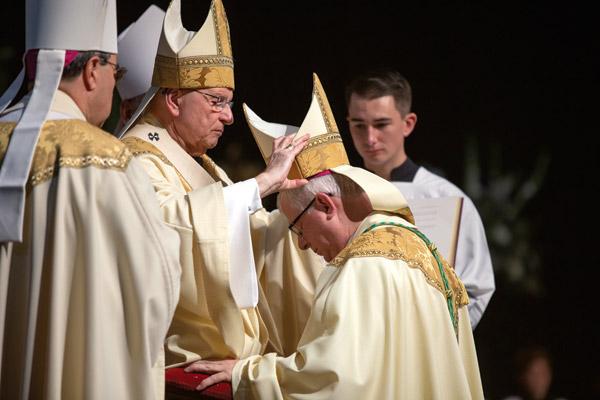 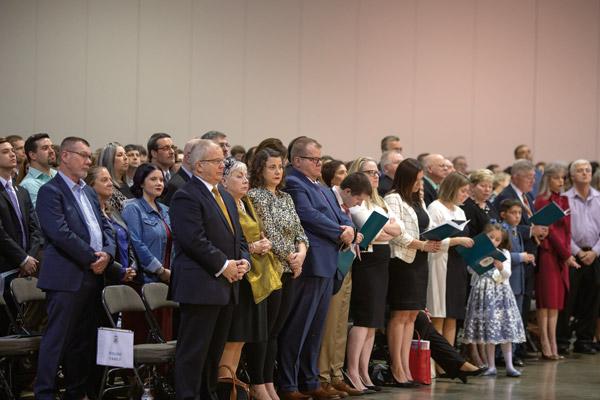 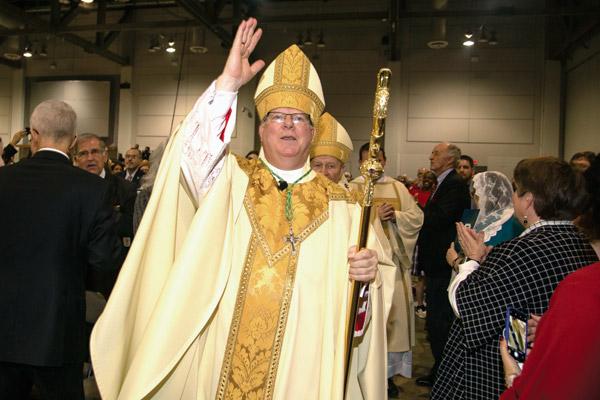 Bishop Malone makes pledge to new Louisiana flock: ‘I will die for you’ 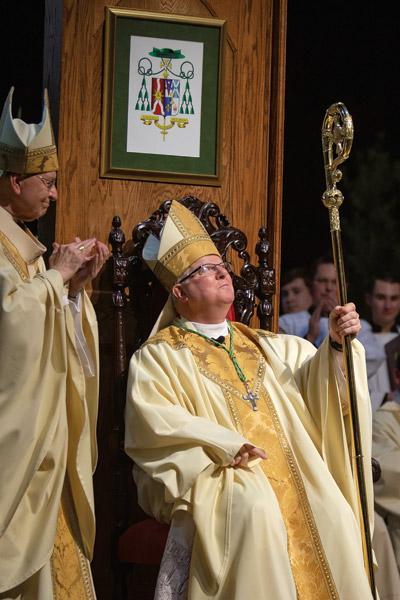 Bob Ocken
Bishop Francis I. Malone, sitting for the first time in the cathedra when he is installed as Bishop of Shreveport Jan. 28, looks up at the crosier once used by the late Bishop Andrew J. McDonald, who ordained him a priest in 1977. Archbishop Gregory Aymond of New Orleans (left) applauds the installation during Bishop Malone’s episcopal ordination.

Bob Ocken
Bishop Francis I. Malone, sitting for the first time in the cathedra when he is installed as Bishop of Shreveport Jan. 28, looks up at the crosier once used by the late Bishop Andrew J. McDonald, who ordained him a priest in 1977. Archbishop Gregory Aymond of New Orleans (left) applauds the installation during Bishop Malone’s episcopal ordination.

Read more about Bishop Francis I. Malone's journey to his episcopal ordination in this Arkansas Catholic special section:

Msgr. Malone is bound for Shreveport to be their new bishop

SHREVEPORT — Bishop Francis I. Malone was ordained the third bishop of the Diocese of Shreveport, La., Jan. 28, and had a simple, yet profound message for his new flock: “I will die for you.”

“This is very important, I want you to listen. I want you to know that for the years the Lord gives me to be your shepherd, I will live among you and I will die for you. This gives me great joy, I pray it does you as well,” the bishop said in his remarks at the end of Mass, and told his Little Rock family, the diocese, Christ the King Church and School and his fellow priests, “My heart will ever remain with you.”

It was fitting, as Bishop Malone has been known to the Diocese of Little Rock for the past 42 years as dying to self in his ministries as a pastor, champion of Catholic education, a generous heart for missions and outreach and spiritual father for those discerning a vocation.

“It’s a confirmation of what those of us who’ve grown up in the Church know about the shepherd, the one who feeds the flock and one who is responsible for the spiritual care of those entrusted to his care. So that’s what I feel today and I know that I’ve got a lot of responsibility ahead of me. The Lord and the Holy Spirit will make it happen,” Bishop Malone told Arkansas Catholic after his ordination.

“I know that I’ve got a lot of responsibility ahead of me. The Lord and the Holy Spirit will make it happen.” Bishop Francis I. Malone, after his ordination as Bishop of Shreveport

An estimated 2,650 attended the episcopal ordination at the Shreveport Convention Center, with anticipatory praise from his new flock and a heartfelt send-off from Arkansans he was leaving behind.

Bishop Malone was ordained by Archbishop Gregory Aymond of New Orleans, with Bishop Anthony B. Taylor and Bishop Michael G. Duca of Baton Rouge, the former bishop of Shreveport, as co-consecrators. Archbishop Christophe Pierre, apostolic nuncio to the United States, was the installing prelate. In his homily, Archbishop Aymond said Bishop Malone’s ministry will be threefold, in preaching the Gospel and Church teaching, leading God’s people in prayer and sacraments and giving pastoral care.

“Bishop-elect, as the Prophet Isaiah says, to you, ‘The spirit of God is upon you. He has anointed you.’ And you were sent to preach the Gospel, to work with justice and make the good shepherd the Lord Jesus present today.”

The Diocese of Shreveport, founded in 1986, has 37 parishes and missions and six Catholic schools. Fifty diocesan, religious and extern priests serve 41,615 Catholics, according to the 2019 Official Catholic Directory.

In attendance were 14 bishops and archbishops, including retired Archbishop J. Peter Sartain, former bishop of Little Rock. Chaplains for Bishop Malone, who sat by his side during the ordination, were diocesan vocations director Msgr. Scott Friend and Father Erik Pohlmeier, now pastor at the bishop’s former parish, Christ the King Church.

More than 50 Arkansas priests as well as deacons, religious men and women, seminarians, members of the Knights of Columbus, Knights of Peter Claver, Equestrian Order of the Holy Sepulchre and Dames and Knights of St. Gregory were in attendance. Christ the King School closed for the day and principal Kathy House said more than 50 teachers and staff attended, as well as some students and their parents. Bishop Malone pastored at Christ the King Church and School in Little Rock for nearly 19 years, and several former and present parishioners celebrated with him in Shreveport.

House, who said she loved that Bishop Malone “was so touched and humbled” during the ordination, said his first Mass Jan. 29 would be with school children at the Cathedral of St. John Berchmans School in Shreveport, to celebrate Catholic Schools Week.

Gems, in both people and mementoes, were present during the ordination. Bishop Malone held the crosier used by the late Bishop Andrew J. McDonald, lent to him to use while he serves in Shreveport. The postlude was also in homage to the late Bishop McDonald, the Toccata from Fifth Symphony by Widor.

“I love that he did the final blessing, was the same blessing that Bishop McDonald always gave,” the pontifical blessing, House said. “… I thought in my mind if you’re going to hold his crosier, you’ve got to give his blessing and he did it.”

The chalice, given to him by Msgr. John L. Nugent upon his priestly ordination in 1977, includes his father’s two-band gold wedding cross and nine diamonds signifying Bishop Malone and his parents’ eight other children. A ring was given to him by his surviving seven siblings. His pectoral cross was found in the belongings of his late uncle Msgr. Bernard Malone and had been worn by his great-aunt Sister Margaret Mary, of the Sisters of the Sacred Heart.

His brother, John Malone, sang the Litany of Saints, as he had done for Bishop Malone’s diaconate and priestly ordinations. Five of his siblings also served as gift bearers, with Bishop Malone greeting each one with a hug and kiss.

“Oh everything,” Bishop Malone said of what it meant to have his family in attendance. “They’ve been such a great support. We’re a very, very close family. They’ve been supporting me all my life.”

Thomas Malone, a great-nephew of Bishop Malone’s and a seminarian from the Diocese of Boise, along with Will and Nate Provencher, Isabella Nguyen and Erin Strickland, were altar servers, hand-picked by Bishop Malone from Christ the King Church.

Retired federal Judge Leon Holmes, a parishioner of Our Lady of Good Counsel Church in Little Rock with his wife Susan, pointed to the pastoral way in which then-Father Malone, as rector of the Cathedral of St. Andrew, ministered to their daughter, who was ill suffering from migraines and seizures.

“He reached out and took her under his wings,” Leon Holmes said, teaching her about the Catholic theology of suffering which he credits with her joyfulness despite her health struggles. “He loved our children and always has.”

Bishop Malone walked throughout the convention center at the end of Mass with a big smile, blessing everyone and waving. Following his remarks, he processed out of the Mass and quickly spotted his longtime friend Charlie Sullivan, greeting him with a hug.

While there will be a hole left in Little Rock, Msgr. Friend said it was moving to be present for Bishop Malone’s send-off to Shreveport as he begins his new ministry.

“I just see the Lord’s providential care for both us and also for them,” Msgr. Friend said.

Read more about Bishop Francis I. Malone's journey to his episcopal ordination in this Arkansas Catholic special section:

Msgr. Malone is bound for Shreveport to be their new bishop