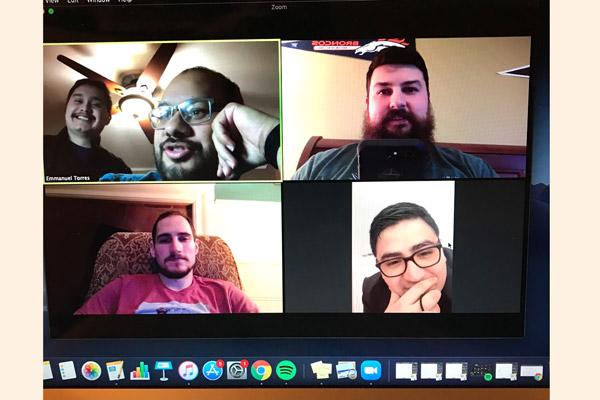 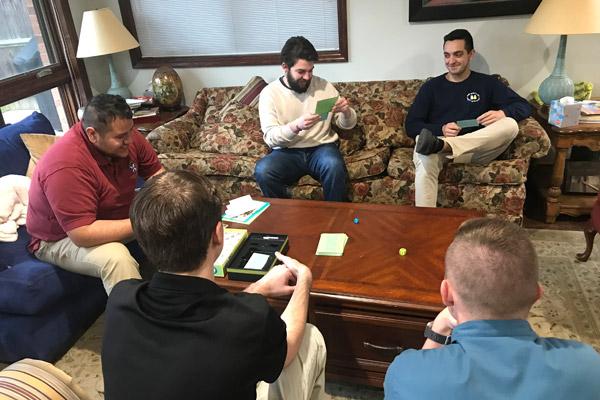 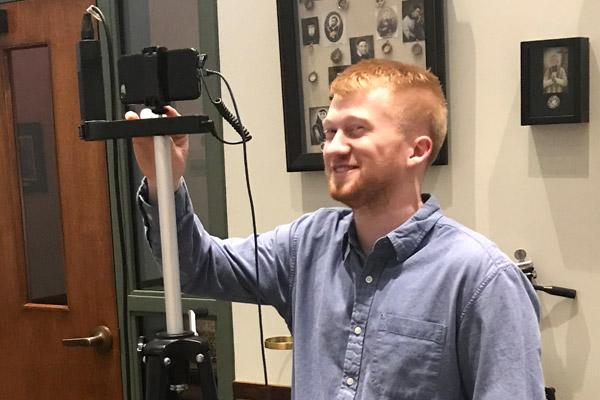 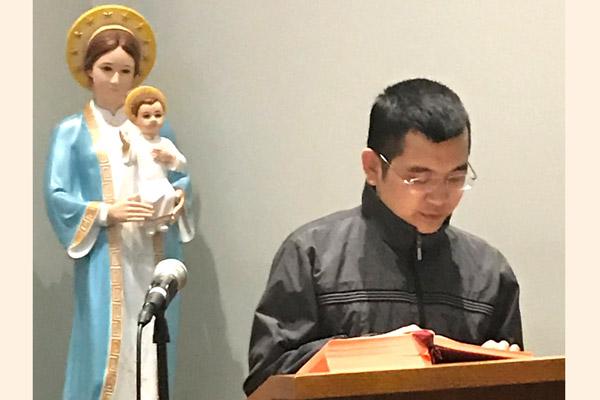 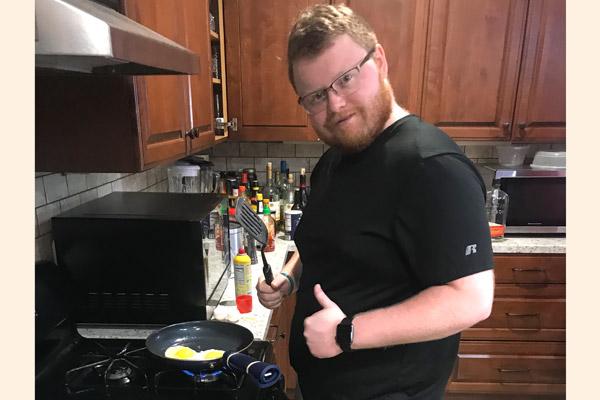 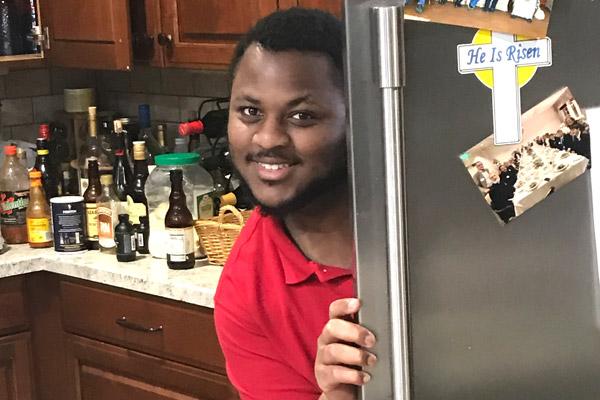 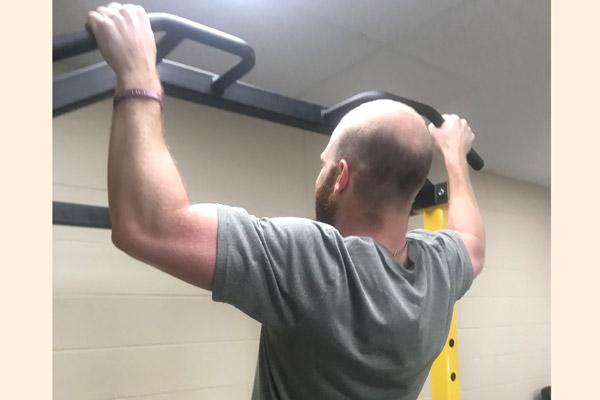 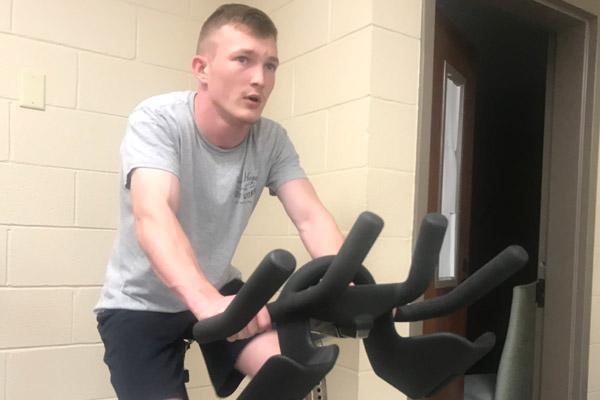 Some seminarians return to family, online learning as public is asked to isolate 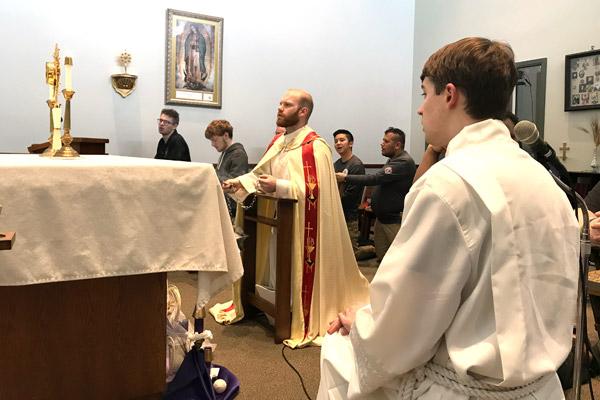 Jonathan Semmler
Deacon Joseph Friend prays during adoration at the House of Formation April 2, surrounded by fellow seminarians. Outside ministries have been suspended, leaving the seminarians to devote more time to prayer.

Jonathan Semmler
Deacon Joseph Friend prays during adoration at the House of Formation April 2, surrounded by fellow seminarians. Outside ministries have been suspended, leaving the seminarians to devote more time to prayer.

The Diocese of Little Rock announced it was rescheduling ordination Masses, the chrism Mass and priest jubilarian Mass to August.

Diocesan seminarians at the House of Formation in Little Rock are bonding as brothers in Christ do — going to Mass, praying, watching movies and playing board and video games. But under normal circumstances, they’d break away to go to school and minister in parishes.

In light of the COVID-19 threat, 15 seminarians, three priests and Bishop Anthony B. Taylor are all isolating together, keeping the faith.

Those studying at seminaries out of state have returned to the state. Three seminarians are at St. Mary Church in North Little Rock, one is at Christ the King Church in Fort Smith and eight are with their families.

“Well, the biggest thing is nobody goes out. So we’re kind of at this point isolating ourselves so that means there’s no ministry,” said diocesan vocations director Msgr. Scott Friend.

Despite the situation, “They’re making it work … It stretches everybody a little bit and that’s always good to let us learn to love a little more deeply.”

While practicing “social distancing” from the public, the men do enjoy walking, cooking and playing games to pass the time in between spiritual fulfillment. Donations from friends with local restaurants and grocery stores have also been a light in the darkness.

“We’re catching up on movies; and my nephews and me are watching all the ‘Star Wars’ in sequence,” Msgr. Friend said of Father Patrick Friend and Deacon Joseph Friend.

However, there are some challenges beyond getting on each other’s nerves from time to time.

On Holy Thursday, the diocese takes up a collection for the seminarian education fund, which pays for the immediate education and housing of the seminarians. With no public Masses, donations will have to be collected online at dolr.org/support-seminarian-education or mailed to their parish or directly to the Diocese of Little Rock Vocations Office, P.O. Box 7239, Little Rock AR 72217-7239.

“Just like everyone else we have to be able to pay our bills. So for right now I think we’re OK but that is of some concern to me because we have to afford to be able to operate,” he said of the collection, which usually raises about $250,000.

However, he understands it’s a tough financial time for many families.

The priestly ordinations of Deacons Daniel Velasco Perez and Joseph Friend, originally scheduled for May, have been postponed until August, along with the diaconate ordinations (see sidebar).

“The bishop and I discussed it. The bishop could ordain the guys, and there wouldn’t be anybody present except for the seminarians. But by August we’re hoping things are a little bit better,” Msgr. Friend said. “... It’d be a way to celebrate together as a diocese.”

“I think the one word I’d describe it with would be heartbroken. There’s a lot of good friends I had to say goodbye to way too soon,” including his fellow seminarians and professors.

He was ministering at St. Francis of Assisi Church, covering a network of parishes in the cities of Dale, Santa Claus and Mariah Hill, Ind., but did not get a chance to say goodbye.

Delaying ordination was a unique kind of pain.

“This is something I’ve felt in my heart for my entire life. I’ve always, since I’ve been in the seminary I’ve felt confident in my vocation. What can be cooler … than consecrating the Eucharist at Mass?” he said. “... While we could do an ordination on livestream and very few people there, imagine what it could do for the faith of the people when we finally come back together and celebrate an ordination.”

Seminarian Colton Ketter, 21, from Charleston who joined the House of Formation in August, is studying second-year philosophy through the University of Arkansas in Little Rock online.

“Just having to adapt to a new way of studying and attending class. That’s something we’re all kind of getting used to,” he said, adding being away from ministering to the confirmation class at Our Lady of Good Counsel Church has been tough.

Board-game competitions have increased and Ketter has tried a couple of new hobbies.

“I found an old trumpet lying around here and started playing that,” something he used to do in high school. “I’ve tried baking. So far I made a Boston crème pie and some chocolate cookies.”

On March 18, Brian Cundall, 25, headed back to Little Rock to live with his parents. While it was hard to leave St. Meinrad, he has maintained group texts with several friends. He watches the livestream Mass at the House of Formation and keeps his schedule of morning and evening prayers.

“If you don’t keep a schedule, it will just be like very early summer vacation. I’m doing my classwork in the morning, working out and kind of having the afternoon free,” Cundall said. “I’m reading one of the longest fantasy series ever written, 15 books … I just started the fifth one. ‘The Wheel of Time’ series … It does kind of feel like we’re in a fantasy world or something made up.”

Taking advice from Bishop Robert Barron, he’s taken up a devotion, praying the Divine Mercy Chaplet in the afternoon with his mother.

“I think picking up some sort of extra devotion now that we’re home would be very good,” he said. “It’s a blessing and a curse because when you have so much free time and are at home, it can be very easy to fall out of prayer … This is also a time where we should be praying more, we have more time and opportunity to pray. We should be able to dive deeper into our spiritual life.”

The Diocese of Little Rock announced it was rescheduling ordination Masses, the chrism Mass and priest jubilarian Mass to August.

Pope Francis: ‘We must also cure a larger virus’