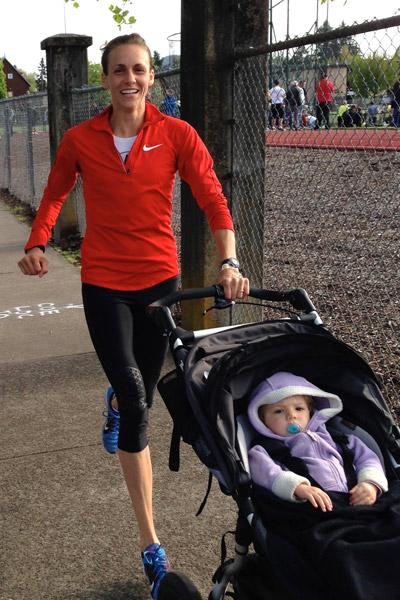 Courtesy Julia Webb
Julia Webb takes a run with daughter Joanie, then 1, along for the ride in this 2014 photo. Webb has set three unofficial Guinness World Records for running while pushing a stroller, each set with a different daughter aboard.

Courtesy Julia Webb
Julia Webb takes a run with daughter Joanie, then 1, along for the ride in this 2014 photo. Webb has set three unofficial Guinness World Records for running while pushing a stroller, each set with a different daughter aboard.

Ask anyone who’s run a race — from 5K to marathon — and they’ll tell you the absolute spirit-breaker isn’t a hill, a headwind or a hammy but to be giving it your all and a sprightly woman pushing a stroller goes by like you’ve stopped to tie your shoes.

Julia Webb, parishioner of Christ the King Church in Little Rock, is one such runner. A former NCAA Division III track and cross-country standout, the 37-year-old is a formidable foe at multiple distances and she’s got the world records to prove it. Well, almost.

Webb has unofficially bested Guinness Book of World Record marks three times in her career for running while pushing a stroller. She and eldest daughter Joanie, now 7, set the mark for the 10K distance a few years ago, only to have another mom break that time three months later, well shy of the nine months it generally takes for the Guinness Book to certify the feat.

She then set the mark at the half-marathon distance (13.3 miles) with middle daughter Paula, now 4. But that bid for the book was foiled from lack of video evidence. So, to prove a point, Webb rebroke her own mark in November 2019 with youngest Gabi along for the ride, three years after she did it with Paula. That bid is winding its way through the verification process.

“When I discovered that there were Guinness World Records for people pushing their babies in strollers, I thought that’s awesome, I’m going to try to see if I can break some of them,” she said. “I saw the times and thought I can definitely do this; I run some of those times just in practice. It’s an obscure record and it’s not like you have a championship for stroller running. I run so many miles with my daughter, why not race with her?”

Webb’s running career is a highlight reel. A multi-sport athlete in high school, she didn’t even get into competitive running until her senior year, yet was good enough to land on the college cross-country and track teams at the University of Wisconsin-LaCrosse. During her career, she earned All-America honors 11 times and a national title in the 3,000m steeplechase.

After college, she continued to compete in the U.S. National Championships, something she does to this day. Many elite athletes slow down past 30, but Webb appears to be wired just the opposite. She scored a top-10 finish at Nationals, her best ever, in 2013 and in 2018 qualified for February’s U.S. Olympic Trials in Atlanta in the marathon.

“I think I was ranked 460th going in because there were so many women qualifying, and I ended up getting 187th,” she said of the Trials. “It wasn’t an amazing race for me, but it was decent.”

Webb met her husband Alan, a world-class runner in his own right who now coaches at UALR, at a running-related function after college. She’d known about his exploits since high school, including setting the American record in the mile, and the chemistry was immediate. That chemistry has weathered stark differences in their personalities and the deep competitive streak that sometimes proves toxic in relationships.

One area where they are in lockstep is living their faith out loud, be it at work, at home or in competition. Julia, an avid supporter of Life Runners, a pro-life running group, has no problem knitting faith into athletics.

“I love tying faith to my running,” Julia said. “I feel that God is so present, especially when I compete for Life Runners. Just wearing that jersey, I feel so much confidence. I’m like, I’m doing this for you, Lord; I don’t know what the outcome is going to be, but just strengthen me and allow me to be a light so that people see that I’m not just running for me. I’m running to represent the most vulnerable humans in our population, the unborn.”

“Many times when I’m running solo, I’m praying. I’m using that time to reset and just listen because a lot of times, my life is so loud with all my kids. That’s a time where I get some quiet and I get some really deep, concentrated prayer so I’m running nice and relaxed.”