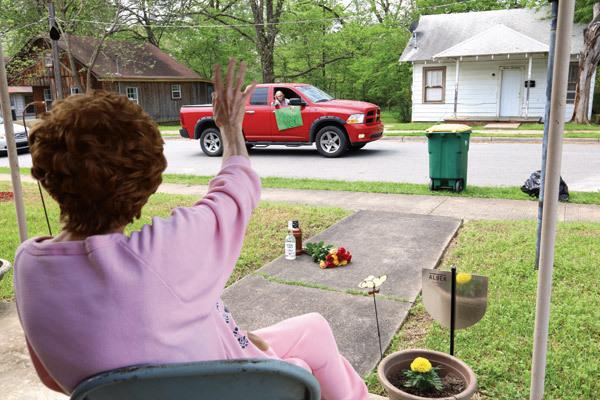 Dwain Hebda
Mary Ann Rose waves to vehicles from her North Little Rock porch. Rose’s sister, Elizabeth “Libba” Rose, a former parish secretary for St. Edward Church in Little Rock, died April 4 but could not have a funeral Mass to accommodate all because of COVID-19. Her fellow parishioners and longtime friends instead formed an April 8 parade in tribute to the two sisters, both lifelong members of St. Edward Church.

Dwain Hebda
Mary Ann Rose waves to vehicles from her North Little Rock porch. Rose’s sister, Elizabeth “Libba” Rose, a former parish secretary for St. Edward Church in Little Rock, died April 4 but could not have a funeral Mass to accommodate all because of COVID-19. Her fellow parishioners and longtime friends instead formed an April 8 parade in tribute to the two sisters, both lifelong members of St. Edward Church.

Mary Ann Rose sat on the front porch of her tidy North Little Rock home and looked expectantly up and down the block. Family members had come by earlier and told her to prepare for company, but didn’t give a lot of details.

“I was in my nightie and they said you’re going to have to go put some clothes on,” she said April 8 with a grin.

It had been just days since Rose’s sister and roommate, Elizabeth, had died peacefully in her sleep and to the observer, it looked like the loss hadn’t yet fully sunk in. True to form, when asked what the days since her sister’s death had been like, Rose thought about the grief of others, like her parochial family at St. Edward Church in Little Rock.

“I’ve received a lot of phone calls. I think everybody’s so shocked to hear and learn that she passed away,” said Rose, 82. “But I’m so happy that she went in her sleep.”

What Rose didn’t know about — and what was coming down the street — was a procession of vehicles filled with well-wishers. About an hour before, cars and minivans formed a loose line snaking through the former St. Edward School parking lot. People scurried around, affixing signs and sharing their motivation for being there.

“We have known the Rose girls forever and ever,” said Beverly Edmonson from behind large sunglasses. “They’ve been longtime family friends of ours. (We’re here) just to pay our respects to them and the rest of their family.”

“Even in these times, when such a good life goes away, you’ve got to celebrate any way you can,” said her husband, Benjie Edmonson.

Most of the people in line had a similar story. Nobody called her Elizabeth; her friends all called her Libba. And as a lifetime member of St. Edward, those friends were many.

Asked what it meant to see the long line of cars, Deacon Dan Hennessey smiled.

“Just thrills me,” he said. “Probably mostly for Libba and the Rose family, but I think it also gives us a sense of community when we can’t really have it, even though we’re all car lengths apart. It helps us to feel connected to the people in the parish.

Libba was born Aug. 29, 1940, one of Eddie Rose Sr. and Christine Lochner Rose’s nine children. She attended St. Edward School and graduated from Mount St. Mary Academy in 1958. She built a long career with the Federal Reserve Bank and was church secretary.

Following her death April 4, concerns over COVID-19 meant people could not attend a traditional funeral Mass. So the idea was floated to organize the makeshift parade instead.

“They were just great members of this church and we’re going to miss them. They were such fun sisters and this is just a great show of respect and love,” Danaher said.

As the parade reached the Rose house in North Little Rock a few miles from the church, Scott Sparks, St. Edward parish manager, threw the parade’s lead car into park and leapt out with a bouquet cradled in one arm, a bottle of vodka in one hand and bloody mary mix in the other. He placed them on the walkway leading up to the porch, shouted, “We love you!” and drove down the block.

Following him, each vehicle slowly passed the porch, honking, smiling, waving signs. Some cars turned around and made a second pass; others paused as parishioners spoke to each other through rolled-down windows.

“Oh my God, it was wonderful,” Mary Ann Rose said. “I love everyone. I was just so surprised. I’ve never been so surprised in all my life.”

Financial picture for parishes will be clearer this fall

How students cope with COVID-19 and warning signs

Catholics can lead the way to promote faith, science