Kristy Dunn honored with NCEA award for advancements made at St. Theresa School 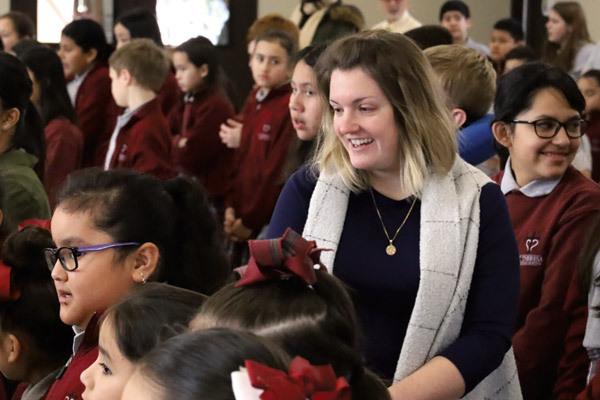 Dwain Hebda
Principal Kristy Dunn circulates through the student body during a school Mass in February. The administrator of St. Theresa School in Little Rock is among five principals to receive a national award.

Dwain Hebda
Principal Kristy Dunn circulates through the student body during a school Mass in February. The administrator of St. Theresa School in Little Rock is among five principals to receive a national award.

Ask Kristy Dunn the hardest lesson about being a principal and she’ll tell you it’s coming to grips with what you do not know in a job where everybody, including yourself, expects you to know everything.

“I never saw coming the need (here) and what I mean by that is each person has a specific need,” said Dunn, principal of St. Theresa School in Little Rock. “I endeavor every day to figure out how to serve 227 kids and a faculty and a staff and the parents. And while I’m not at the biggest school in the diocese, when you’re an at-risk population every kid and every parent has a need. That’s what I wasn’t prepared for.”

If Dunn was initially surprised by the myriad challenges, she’s proven a quick study in finding effective solutions to some of those problems. In January, she was recognized for these efforts as one of just five principals in the country to receive the Lead, Learn, Proclaim Award, presented by National Catholic Educational Association. Other awards were given to superintendents, pastors and teachers. She was set to be recognized April 14-16 during the NCEA convention in Baltimore but the event was canceled.

There’s no question St. Theresa School looks and feels different from most Catholic schools in Little Rock, serving as it does a population that’s heavily immigrant, overwhelmingly Hispanic and many come from lower-income families.

A couple of months ago, a visitor could watch children line up for free breakfast or linger at the end of the day in a safe after-care environment until their parents arrived from work. Both amenities came about from Dunn’s recognition of hunger and child care as daily mitigating circumstances for many of St. Theresa’s families.

“I’ve tried to really tune in to the mission of the school and who we’re called to serve and what we need to do that, which does include implementing breakfast, implementing an affordable after-school program.”

Dunn designed the programs and landed a grant to pay for them, the latest in a string of amenities implemented to support students.

“Our Title I program has been in place for four years,” she said. “That allows students with learning differentiations or learning needs to have either pullout instruction or supplemental instruction through a certified teacher.”

Dunn graduated from St. Theresa School in 1996 and Mount St. Mary Academy in 2000. She earned her undergrad degree from Lyon College in Batesville and holds a master’s degree in Catholic School Leadership from the University of Dallas. She started at the southwest Little Rock school as an English teacher where she quickly learned the facts of teaching life.

Dunn’s fighting spirit has proven infectious. When St. Theresa alums learned about her efforts to provide free breakfast, they started reaching out for other ways of help. One idea materialized as a food pantry for families in need. In another instance, a Catholic from across town organized a coat drive, ultimately dropping off 100 of them at Dunn’s door. Catholic High School shared surplus laptops for distribution to St. Theresa students to complete homework during COVID-19.

“Because we are known for what we do, now we have these partners that come in and it’s insane,” Dunn said. “Just the fact that our identity is so clear and our mission is so clear, people want to latch onto that.”

As heart-warming as all this is, Dunn’s not naïve about what a single program — or even a national award — guarantees for the long-term survival of St. Theresa School, which is to say not much. Job loss and health worries related to COVID-19 disproportionately affect her students and their families, to say nothing of the financial and emotional toll on staff.

“I now know, and I recognize in a new way, how Jesus journeys with us in each of our specific lives,” she said. “I give all the credit to the people who put their trust in us and who come and be a part of this community. I have a school board that is all Hispanic. I have parents who do the heavy lifting. I just want to make sure that statement is expressed. I definitely consider this a community award.”

SEE MORE PHOTOS related to this story at Arkansas Catholic's Zenfolio page, and order prints if you like. You also can browse other photos taken by Arkansas Catholic photographers.
Click for the Catholic Schools Herald, April 2020 index