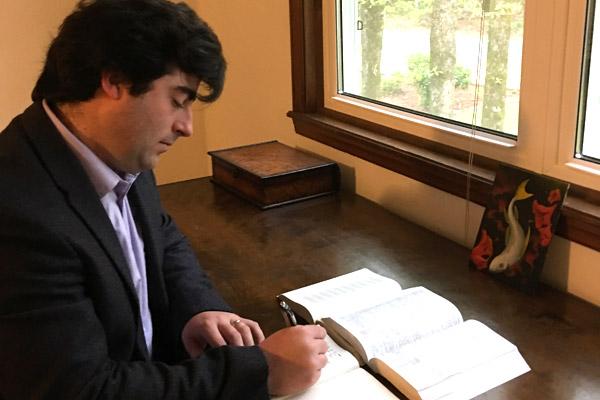 The spring semester of his freshman year at the University of Dallas, Danny Fitzpatrick first read “The Divine Comedy,” one of the greatest pieces in world literature from 14th-century Italian Catholic poet Dante Alighieri.

“There was definitely a feeling of awe,” the 28-year-old cradle Catholic said. “... As a poem because it’s so long and the structure is so intricate, but also as kind of an encyclopedia of knowledge because Dante makes these constant references” to classic poetry, history and politics.

Now, 10 years later, Fitzpatrick, a parishioner at Sacred Heart Church in Hot Springs Village, is not only translating “The Divine Comedy” into English, but using the translation as a way to raise money for Santo Spirito Hospital in Rome, near the Vatican, to help in their fight against the coronavirus. Money will go toward personal protective equipment for health care workers, ventilators and other supplies necessary to aid the country hit hard by COVID-19, the disease caused by the novel coronavirus. According to the World Health Organization, as of April 28 there have been 26,977 virus deaths out of the 199,414 cases in Italy. So far, $1,800 of the $700,000 goal has been raised.

“We’re just trying to raise as much as possible, especially because coronavirus has been so hard on Italy,” Fitzpatrick said. “It’s a chance to reignite people’s love of Dante and also use that for the good of Italy, which Dante loved so much.”

In an effort managed by Enroute Books and Media, a Catholic publishing company, Fitzpatrick is translating all 100 cantos or chapters of “The Divine Comedy” to English. Renowned Canadian artist Timothy Schmalz, known for his work in historic churches and the Vatican including “Angels Unawares,” the bronze sculpture installed in St. Peter Square in 2019 for the 105th World Migrant and Refugee Day, is creating sculptures based on the chapters. He is the first artist ever to create a complete sculpture collection for each chapter.

Schmalz came up with the idea for the project, telling Arkansas Catholic, “It was too poetic to disregard … the power of this great father of Italy is actually helping Italy.”

For those who make a one-time donation of at least $5 through a GoFundMe link shared on enroutebooksandmedia.com/helpdantehelpitaly, they will receive two translated chapters and an image of the sculpture relating to the chapter emailed weekly. By Dante Day 2021, which was established for the first time this year in Italy March 25, the 700th anniversary of “The Divine Comedy,” donors will have all the chapters and images.

Larger donors will receive a printed copy of the translation and artwork.

“I like to think of it as Dante helping,” Schmalz said in an interview with Arkansas Catholic.

“I’m glad to be out of hell, and I find it kind of ironic to be sculpting purgatory because we’re all in a state of purgatory right now,” Schmalz said of the sculptures. “... One of the interesting things about the project, which I think is fascinating, is Dante wrote this while in exile … 700 years later, we’re translating his work when all of Italy is in personal exile.”

By Fitzpatrick’s estimation, there’s about six or seven English translations of the “Comedy” and while it may seem surprising the next is coming from a car salesman who lives in a small city of Arkansas, it’s the path in which Fitzpatrick has been called.

The married father of two grew up in New Orleans. He graduated from Jesuit High School in 2009 and from the University of Dallas with a bachelor’s degree in philosophy in 2013. He taught three years at Jesuit. Fitzpatrick learned Italian partly from his Sicilian ancestry and from his time studying abroad in Rome in spring 2011.

When their daughter was born, he and his wife Grace moved to Hot Springs Village to be closer to Grace’s parents, Miriam and Patrick Gallaher, in 2016, and he began online courses for his master’s degree in philosophy with Holy Apostles College and Seminary in Connecticut. Dr. Sebastian Mahfood, OP, a professor and publisher of Enroute Books and Media, published Fitzpatrick’s first novel, “Only the Lover Sings,” which debuted in March.

Through his work with Enroute, Fitzpatrick was connected with Schmalz and the two, along with the publishing company, got to work on the translations and sculptures.

He’s up to 20 translated chapters, the first of which were released March 25. Being a part of this translation is another way the Holy Spirit is keeping him grounded in his spiritual life.

“As a Catholic we’re called to give. I think that especially for someone who is in the car business, it’s hard not to be greedy in it,” Fitzpatrick said. “For me personally, I need these constant reminders of ‘don’t get greedy, don’t chase money.’ At the end of the day it all has to be for Christ and the poor.”