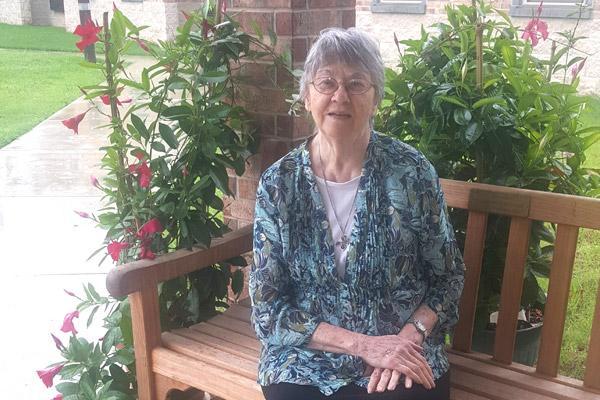 Sister Macrina Wiederkehr, OSB, who celebrated 60 years of religious life last year and her ninth published book, died April 24 at St. Scholastica Monastery in Fort Smith of a glioblastoma. She was 80.

Martha Ann Wiederkehr was born July 28, 1939, in Altus to parents Henry Wiederkehr and Marion Eveld Wiederkehr. In an October 2019 article in Arkansas Catholic, she shared she grew up with a love for writing on the family farm in Altus with seven siblings.

“My father wrote poems when each of us left home. I was the youngest surviving child, the last one to leave home, and he wrote that I was acrobatic and full of jokes and fun and I was going to be a nun,” Sister Macrina said.

She was received into St. Scholastica Monastery June 24, 1957, and chose the name Sister Mary Macrina. She earned a bachelor’s degree in elementary education from Mount Angel College in Oregon and a master’s degree in religious education from St. Thomas University in Houston.

For several years, she taught in schools and parishes, including St. Boniface School in Bigelow, St. Thomas Newman Center in Fayetteville, St. Joseph School in Ada, Okla., and several throughout Missouri.

At the monastery, Sister Macrina served as the vocation director, retreat director and spiritual director, and in diaconate ministry for the Diocese of Little Rock, her St. Scholastica obituary stated.

In the October Arkansas Catholic article, she discussed her ninth book “The Flowing Grace of Now.”

“I took my living faith meditations and edited them extensively and selected 52 Scripture passages, one for each week of the year, assigning a teacher for each one,” Sister Macrina said. “A teacher might be a biblical character, but it might also be an attribute or virtue. We can find teachers everywhere, but there’s also a teacher hidden within us, and we need to sit down and listen.”

She is survived by one brother, Joseph Wiederkehr; and two sisters, Edna O’Neill and Mary Lou Bennett.

A Mass of Christian Burial will be held at a later date because of COVID-19 restrictions. Memorials may be made to St. Scholastica Monastery Continuing Care Fund, 1315 S. Albert Pike Ave., Fort Smith, AR 72903.