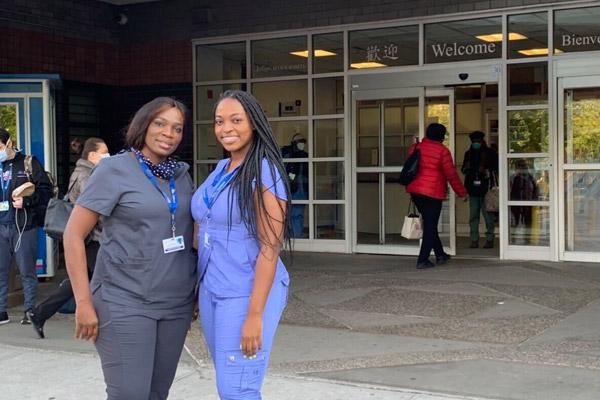 When Uchenna “Ann” Onyia-Murphy walked into the hospital in Queens, New York, April 6 and in the days that followed, there were countless intubated patients, body bags wheeled out and loaded into vans to ease an overcrowded morgue and tragedy, watching patients slip away with no loved ones allowed to be near them due to COVID-19.

“It’s been heartbreaking. The worst is when you see a loved one dying without a family member by their side. It’s very isolating and lonely, even for us health care workers,” she said, adding she’s prayed quickly with patients, held their hands as they died. “... Initially when it started they were dropping like flies. You’d go to a unit and they’re wheeling two to three people out.”

But going to New York City wasn’t in question for the 49-year-old Catholic, a parishioner at St. Augustine Church in North Little Rock. Uchenna, her daughter Ona Onyia, 23, and Karla Argueta, 40, a parishioner at St. Theresa Church in Little Rock, are just a few of the nurses that have left their states to assist New York hospitals and other hot spots in fighting the COVID-19 pandemic.

According to an April 6 CNBC article, travel nurses make up a small percentage of the 3.8 million nurses in the United States, but are crucial in these circumstances, with one medical staffing firm deploying 800 in a less than three-week span. New York City Mayor Bill de Blasio said an additional 45,000 medical personnel were needed.

“This is my calling; this is the moment, this is the reason I’m nursing, working in situations like this.” Ona Onyia

“In Arkansas we weren’t having as many cases and the nurses here needed help … this is my calling; this is the moment, this is the reason I’m nursing, working in situations like this,” Ona Onyia told Arkansas Catholic May 14, following a night shift in New York.

Karla Argueta, a native of El Salvador who has lived in Arkansas since she was 7 years old, has attended St. Theresa Church in Little Rock for about 16 years. The mother of four, whose children are staying with their father and her mother, works as an emergency room nurse at Saline Memorial Hospital in Benton. She has worked as a travel nurse and when the agency kept calling because of the need in New York, she decided to go.

She arrived in mid-April to start her 13-week contract at Long Island Jewish Forest Hills hospital in Queens.

“We intubated all these patients and two died that same night. That was the beginning of my week,” Argueta said. “We still see some, but we haven’t intubated as many. (They had) shortness of breath, cough, fever, some were asymptomatic. It was kind of a blur at first.”

“Sometimes you move from one to the next really quick. It’s hard to spend as much time as you want to. Sometimes before you know it they’ve already taken the body out so they can clean for the next patient,” she added.

Besides her medical expertise, being fluent in Spanish has been a godsend for Hispanic families. While nurses have tablets that interpret other languages, Argueta said, “It’s more personal to be able to be there and talk to the patient and hold their hand, ask a doctor a question. To me it’s been crucial with my patients.”

While Argueta is alone, mother-daughter Uchenna and Ona came together, though the two work separate shifts at Elmhurst Hospital Center, also in Queens.

Natives of Nigeria and cradle Catholics, Uchenna came to Arkansas in 2002, when Ona, one of her three children, was just 6 years old. In 2018, Ona graduated from UAMS with a nursing degree in 2018. She works as an ER nurse at CHI St. Vincent in Little Rock and had to take some personal leave for the trip, planning to return home mid-June or sooner.

For 15 years as a nurse practitioner, Uchenna has worked with a variety of patients, from inmates to military veterans.

“Sometimes you just want to help people,” Uchenna said of their decision to go to New York. “I’m a strong believer of the Golden Rule, ‘Do unto others what you want done unto you.’ You’re seeing people dying in New York, you want to be cautious, but how do you want to be treated if you were in their shoes?”

Uchenna assists in research, administering new medications to patients to see if the treatments work.

“It’s crazy to think people are not taking it seriously,” she said of those outside of New York. “This COVID-19 does not have a pattern. It’s weird, it’s random … it’s not set in stone, it does not discriminate age, gender, color. We have to take it seriously … The best protection is social distance and wear your mask. If you don’t have to go out, don’t go out. It’s a very strange virus. It’s real. I’ve seen people go down.”

Ona, who works in the emergency room, immediately dealt with several intubated patients and running out of medications and ventilators.

“I’m getting patients from all walks of life that are super sick … It was code (cardiopulmonary arrest) after code after code. I was seeing people discharged in body bags,” Ona said.

She admits there’s been “a huge improvement” in recent weeks, but with new symptoms popping up each day, they’re still trying to understand the disease and how to treat it.

“I had somebody pass away who was younger, in his early 30s,” she said. “ … When I first heard about it (the virus) and didn’t see it for myself, I didn’t know what to believe. I’ve seen it with my own two eyes. I’ve seen people deal with this disease. It’s horrifying to be in this situation and you don’t want it to be you.”

In the midst of death and darkness, the nurses have leaned on prayer and focused on the positive.

“Praying to God that everything goes well. That the patients get well … or for them to go to God, let them die peacefully,” Argueta said.

Due to more testing outside the hospital and people taking social distancing seriously, Argueta has seen an improvement and hopes to take what she’s learned back to Arkansas.

“If these nurses can do this, we can do this in Arkansas. It just makes you proud to be a nurse, that you can make a difference,” Argueta said. “Just lessons like that have made me a strong nurse.”

Uchenna said their parish community and the Igbo community are supportive, with pastor Father Leon Ngandu, SVD, praying for them during virtual Masses.

The uniqueness of a mother-daughter nurse duo traveling to New York City has attracted media attention, including a virtual guest appearance May 7 on ABC’s late night show “Jimmy Kimmel Live!”

“I was shaking, I have never been on TV,” Ona said, adding she had to buy clothes other than scrubs “at the Target down the road. My brother had to ship my makeup. It was very exciting. I’m so happy we did it, but very unexpected. I’m just grateful to be recognized.”

The pair chatted with the host, actress Courteney Cox and ate some authentic New York pizza that was sent to them. Thanks to Mary Kay cosmetics, each was given $10,000 and gift sets were going to be sent to them and their fellow nurses.

“It’s just God’s goodness and grace,” Uchenna said of the gifts. “I like to help in my community, always there to give a helping hand. I wasn’t expecting it,” but hopes to send some money to her family in Nigeria and donate to her parish.

“There’s no limit to sharing; you can’t keep it yourself,” she said.