Golf hall of famer says her beliefs, the way she lives influenced by Sisters of Mercy 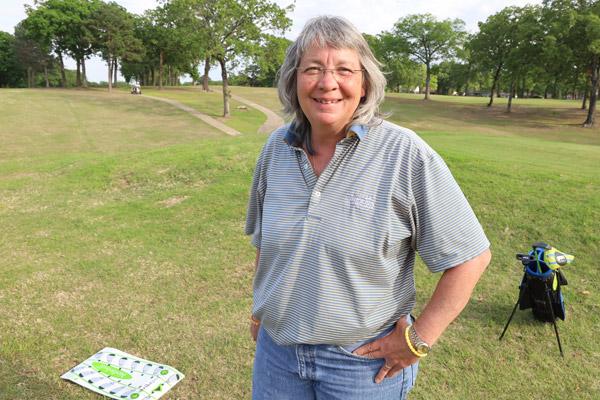 Dwain Hebda
Dawn Darter takes a break from golf lessons at The Greens at North Hills in Sherwood. The Arkansas Golf Hall of Famer grew up on the golf course, right next door to Immaculate Conception Church.

Dwain Hebda
Dawn Darter takes a break from golf lessons at The Greens at North Hills in Sherwood. The Arkansas Golf Hall of Famer grew up on the golf course, right next door to Immaculate Conception Church.

On a spectacular weekday afternoon, a few longtimers gather at The Greens at North Hills in Sherwood for a socially-distanced happy hour as the occasional duffer hums through a leisurely nine before sundown. But for Noah Crisco and August Grunnels, both age 6, it’s serious business.

The boys are here for a golf lesson under the tutelage of Dawn Darter, head pro. Today, the lesson is chipping, for which Darter has rigged an inflatable target. One by one, the lads launch trainers from off the practice green, each swing accompanied by Darter’s sage advice and warm laugh. It’s hard to tell who enjoys the lesson more.

“I’m working 24/7 at this golf course, every day,” she said. “It’s an excellent opportunity for people to get back in touch with who they need to be and who they are and really understand what it’s all about.”

Darter has been the head professional here for a decade, but her ties to the place go back much farther. Her parents, Gene and Dawn Barlow, raised the family in a house just off the sixth hole, making The Greens at North Hills — back then North Hills Country Club — one big backyard. Golf was not only accessible, it was her gift.

“It really worked well; golf has really been all that I have ever known.” Dawn Darter

“My brother was really good. He was a top player in the state,” said Darter, the youngest of four. “My two sisters just kind of gave up. They couldn’t beat me.”

“The PE director at the time, Joy Rundell, started a golf team so I could play in the state tournament,” she said. “I was already winning at junior stuff at that time. So, she started the golf team at Mount St. Mary’s.”

It was one of the school’s better moves. Darter won the girls state title all three times she competed while simultaneously dominating junior amateur competitions. Off the course, the Mount’s environment of discipline and faith impacted her deeply.

“To this day, I can tell you that my belief and the way I live is all dedicated to the Sisters of Mercy,” she said.

After graduating MSM in 1977, Darter continued to break ground as the first out-of-state Title IX athlete at the University of Oklahoma.

“Things were changing pretty quick at that time,” she said.

“I’ve been pretty much an outward person anyway and like to take on tasks that people don’t normally fit you into. It really worked well; golf has really been all that I have ever known.”

As a freshman Darter placed top 25 at nationals, started hot as a sophomore, then halfway through that year turned pro. She qualified for the first of her three U.S. Women’s Open Championships which she’d play in three different decades — 1979 at Brooklawn in Connecticut, 1983 at Cedar Ridge near Tulsa and 1991 at Colonial in Fort Worth, Texas.

For all of her competitive success, Darter quickly found out she wasn’t suited for life as a touring pro. Even the addition of her husband Gary as caddie whom she met (where else?) golfing at North Hills didn’t lure her into playing full-time.

“I started out wanting to play, but once I got on the road I just hated being on the road,” she said. “I didn’t like that part of the life and really, there wasn’t any money to chase out there at the time.”

Darter instead chose the path of club pro, apprenticing in 1981 at North Hills, before becoming head pro at Foxwood Country Club in Jacksonville (1982-1985), Blytheville Country Club (1985-2000) and stints with clubs in Las Vegas and Henderson, Nev. She came back home to Arkansas and “her” course in 2010.

“My sister lives with my mother in the house we grew up in and my other sister lives a mile down the road,” she said. “Not much has changed.”

It’s been more than 35 years since her initial PGA membership but over all that time, her biggest rewards are still the simplest, like a 6-year-old student hitting one dead center or how she still sees the hand of God in the place she calls home, even in the midst of a pandemic.

“(COVID-19) may be God’s way of telling us we need to give back to each other and understand that it’s not about stuff. It’s about embracing your faith and your family.” she said. “So, this really isn’t a bad time; this may be his way of telling us to wake up.”