It’s a commandment: Loving our neighbor means everybody

Bishop Anthony B. Taylor releases statement in response to death of George Floyd 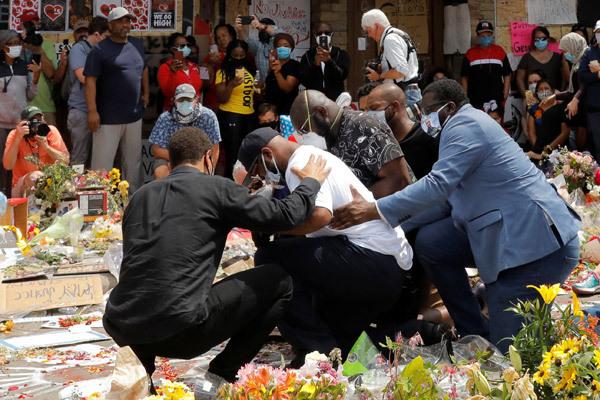 CNS photo/Lucas Jackson, Reuters
Terrence Floyd, the brother of George Floyd, reacts at a makeshift memorial at the spot where he was taken into custody in Minneapolis June 1, 2020. Demonstrations continue after a white police officer was caught on a bystander's video May 25 pressing his knee into the neck of George Floyd, an African American, who later died at a hospital.

CNS photo/Lucas Jackson, Reuters
Terrence Floyd, the brother of George Floyd, reacts at a makeshift memorial at the spot where he was taken into custody in Minneapolis June 1, 2020. Demonstrations continue after a white police officer was caught on a bystander's video May 25 pressing his knee into the neck of George Floyd, an African American, who later died at a hospital.

Bishop Anthony B. Taylor issued this statement June 2 in response to the death of George Floyd in Minneapolis and outrage, grief and anger expressed in Arkansas and across the country over the latest killing of an unarmed black man. The killing of the 46-year-old Floyd was recorded on a widely disseminated video showing a white police officer in Minneapolis pushing down on his neck with his knee May 25. Floyd was later pronounced dead.

Last Sunday we celebrated the great feast of Pentecost, the day when Jesus’ earliest followers were empowered by the Holy Spirit to go forth and proclaim to all the nations the Good News that in Jesus’ victory over the power of sin and death, the walls that separate people must now come down.

The diversity of languages that day gives witness to the fact that the Kingdom of God will include people of every race and tongue. Jesus proclaimed this vision of inclusion throughout his public ministry. What was the greatest commandment of the Law? We must love the Lord our God with all our heart, mind, soul and strength. And what is the second commandment? That we love our neighbor as ourselves. These are commandments of God, not just recommendations. Loving our neighbor as ourselves leaves no room for anything that harms our neighbor. And in our country, no disease has inflicted more harm to our African American neighbors than that of racism. Both individual acts of hatefulness and systemic evils rooted in our nation’s history that continue to produce societal differences that especially disadvantage many African American children right from birth.

If the George Floyd murder had been just an isolated incident, we might be able to chalk it up to a single bad actor -- accompanied by several bad actor “see-no-evil” companions, made worse by the fact that as police officers they were sworn to uphold the law, not turn a blind eye to murder. But coming in the wake of several other such occurrences, it is clear that acts of racial hatred are not just something in the past -- nor are African Americans the only victims. Remember last year’s massacre in El Paso that targeted Hispanics, killing 23 persons and injuring 23 more. Most of us are not so malicious as to ever do anything directly intended to harm someone of another race, but our willingness to tolerate the systemic economic and social disparities that so disadvantage people of color right from birth is also very damaging to the entire fabric of our society.

Surely all fair-minded people can see that this has got to change. Police officers as a group is not the problem -- most of them are outstanding, self-sacrificing public servants tasked with a very demanding and dangerous job. Most of them deserve our compassion, respect and admiration. Moreover, there is no justification for violence, regardless of the righteous anger that many are feeling, nor the destruction of property, understandable though it may be. The problem is the structures of racism that are embedded throughout our economy and society, much of which is invisible to us who are not ourselves disadvantaged, but often glaringly evident to those who are -- and so the frustration and grievances and pent up anger builds.

The bottom line is that we as a nation need to remove those things that continue to harm our neighbor. Racism will only end when everyone has -- and feels like they have -- equal protection under the law, a just wage, decent housing and true access to health care, among other basic human rights.

Here in the South, removing things that continue to harm our neighbor includes removing anything that serves to memorialize the Confederacy in a positive way. This is especially necessary when it comes to monuments to the so-called “Lost Cause,” most of which were erected not in the immediate aftermath of the Civil War but rather during the height of the Jim Crow era as a means of intimidation and assertion of white superiority. The use of the Confederate battle flag must be abandoned as well, indeed anything intended to put this horror in our national history in a false positive light. Even if some consider these to be symbols of our identity as white Southerners, they need to be set aside because much of the population finds them hateful -- otherwise we are not loving our neighbor as ourselves. Is that too high a price to pay for helping to heal the deep racial wounds in our nation’s soul? Surely not.

You don’t have to be African American to see these symbols and recoil with disgust. If our white Southern identity needs a touchstone -- for what purpose I cannot imagine -- we need to find something inoffensive instead. As for the Confederacy, the numerous cemeteries we have are already enough to memorialize a time that is better dead and buried, once its bitter lessons have been learned. Dr. Martin Luther King, Jr. once wrote, “Injustice anywhere is a threat to justice everywhere. We are caught in an inescapable network of mutuality, tied in a single garment of destiny. Whatever affects one directly, affects all indirectly.” (Letter from a Birmingham Jail, 1963).

What is the greatest commandment of the Law? This is worth repeating!  We must love the Lord our God with all our heart, mind, soul and strength, and our neighbor as ourselves. Racism and all its demeaning expressions must be eliminated, not only because they harm our neighbor, but because they violate how God has created us to be.