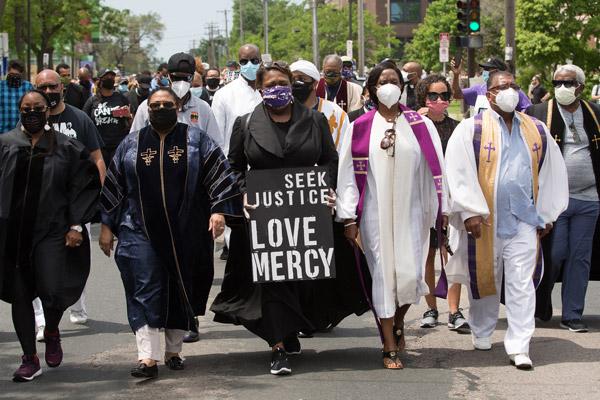 VATICAN CITY -- Observing with great concern the social unrest unfolding in the United States, Pope Francis said no one can claim to defend the sanctity of every human life while turning a blind eye to racism and exclusion.

ST. PAUL, Minn. -- Amid the turmoil following George Floyd’s death in Minneapolis, Archbishop Bernard A. Hebda said the Catholic Church must proclaim the Gospel message of Jesus’ love for all people, as well as its teaching on the dignity of human life.

John Winchester Blizzard, 100, a member of Mary Mother of God Church in Harrison, died May 6. He is survived by ...

After ‘taking a knee,’ border bishop gets a call from pope

WASHINGTON -- It’s called “taking a knee,” and many professional athletes around the country have made the gesture publicly to protest police brutality.

SAN DIEGO -- The Diocese of San Diego zoomed into a new way to bring the faithful together in the era of a pandemic.

BEIJING (CNS) -- Catholics are upset about a directive from China’s communist government asking priests to “preach on patriotism” as a condition for reopening liturgical services, suspended earlier this year because of the COVID-19 pandemic.

VatiVision is coming to a screen near you

“I would like to meet Mother Teresa. Mother Teresa always helped the poor and sick. She would teach orphans and tend to the sick. She is my hero because ...” (Youthspeak, Seeds of Faith)

Can anointing of sick be done by intention?

Q. I am a recent convert to the Catholic Church. I am also a registered nurse and have held many patients as they passed on to eternity. I am concerned over the issue of priests being “barred” from hospitals during the current coronavirus epidemic; I have heard many Catholics bemoan the fact that, as a result, the sick and dying are being denied the sacrament of the sick. (Question Corner, Seeds of Faith)

The nurses kept using the same word. The doctors used it too. Rock star. (Columns)

Combating what is invisible but still real

What is invisible to many us must be addressed by all of us in our nation, communities and Church. We might have never experienced racism, prejudice, discrimination or police brutality, but we can still show empathy and support for those who have. We may never have been denied housing or a job because of our race, but we know it should never happen. (Editorial)

Arkansas Catholic the gift that gives back all year long

Give gift of knowledge with Arkansas Catholic subscription