Document called ‘guide for formation of consciences’ for Catholic voters 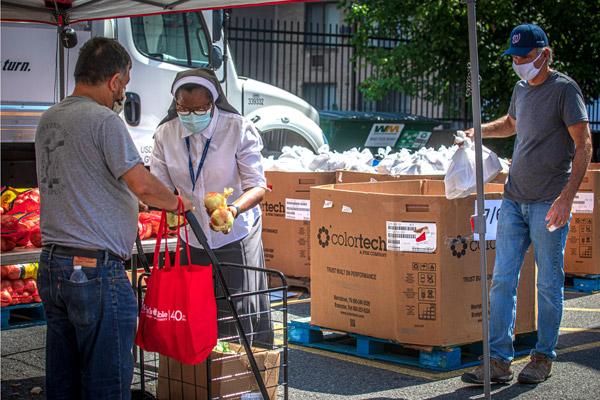 CNS / Chaz Muth
Sister Romana Uzodimma, a Sister of the Handmaids of the Holy Child Jesus, places onions into a man's bag at Catholic Charities' Spanish Catholic Center parking lot in Washington where he is picking up free food supplies July 15 during the pandemic. "No one should face hunger in a land of plenty," says the bishops' quadrennial "Faithful Citizenship" document.

CNS / Chaz Muth
Sister Romana Uzodimma, a Sister of the Handmaids of the Holy Child Jesus, places onions into a man's bag at Catholic Charities' Spanish Catholic Center parking lot in Washington where he is picking up free food supplies July 15 during the pandemic. "No one should face hunger in a land of plenty," says the bishops' quadrennial "Faithful Citizenship" document.

"Forming Consciences for Faithful Citizenship: A Call to Political Responsibility From the Catholic Bishops of the United States"

CLEVELAND -- The U.S. bishops' quadrennial document on political responsibility is rooted in the Catholic Church's long-standing moral tradition that upholds human dignity and the common good of all, Archbishop Paul S. Coakley of Oklahoma City said.

"The document is meant to give Catholic voters an opportunity to reflect upon how their faith intersects with their political and civic responsibilities," said the archbishop, who chairs the bishops' Committee on Domestic Justice and Human Development.

Titled "Forming Consciences for Faithful Citizenship: A Call to Political Responsibility From the Catholic Bishops of the United States," the document has been offered as a guide to Catholic voters every presidential election year since 1976.

It has been updated and revised at four-year intervals to reflect changes in the issues confronting the country since it first appeared.

One thing "Faithful Citizenship" is not is a mandate on which candidate for public office to vote for, Archbishop Coakley said.

Voting, he added, is a responsibility to be taken seriously and that requires prudential judgment in determining who can best serve the common good.

"This document is intended to be that, an official guide for the formation of consciences that Catholics can utilize as they weigh these questions," the archbishop said.

Furthermore, he continued, "the Gospel cannot be parsed in political or partisan terms. The Gospel calls us to live by standards and our Catholic faith calls us to embrace standards that are not divisible into left or right, Republican or Democratic terminology."

The document went through no major revisions for this year's election, but it is being supplemented by an introductory letter, which underwent a long debate before its adoption by the full body of bishops during their fall general assembly in November.

The introductory letter reminds Catholics that "we bring the richness of our faith to the public square" and that "faith and reason inform our efforts to affirm both the dignity of the human person and the common good of all."

The letter also says, "The threat of abortion remains our preeminent priority because it directly attacks life itself, because it takes place within the sanctuary of the family, and because of the number of lives destroyed. At the same time, we cannot dismiss or ignore other serious threats to human life and dignity, such as racism, the environmental crisis, poverty and the death penalty."

It concludes by reminding Catholics to "bring their faith and our consistent moral framework to contribute to important work in our communities, nation, and world on an ongoing basis, not just during election season."

As Election Day, Nov. 3, nears, dioceses and parishes have been gearing up their use of "Faithful Citizenship" resources, according to social ministry directors across the country.

Archbishop Coakley said the bishops expect the guidance offered in the "Faithful Citizenship" materials will gain wider attention this year.

"My hope and prayer is that Catholics who really want their faith to influence their decision making when it comes to going to the polls will give the reflections in this document consideration rather than just going to their favorite news source," he said. "That's going to be a very different kind of guidance than what they receive from their favorite cable news anchor or pundit.

"This is our chance to bring a different light to bear to a very important fundamental civic responsibility."

"Forming Consciences for Faithful Citizenship: A Call to Political Responsibility From the Catholic Bishops of the United States"