In pandemic, schools learned to switch to online learning quickly 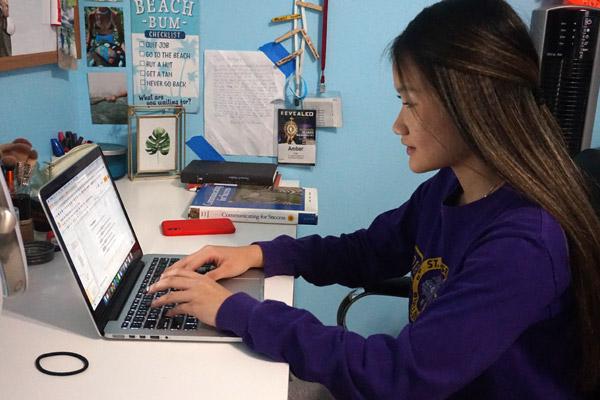 Aprille Hanson
Junior Amber Tran, 16, a St. Joseph School student who is learning online this year, works on an assignment at her home in Conway. Schools learned how to make a quick transition to virtual classrooms because of the pandemic, making snow days obsolete.

Aprille Hanson
Junior Amber Tran, 16, a St. Joseph School student who is learning online this year, works on an assignment at her home in Conway. Schools learned how to make a quick transition to virtual classrooms because of the pandemic, making snow days obsolete.

Click here to read about how Catholic schools had already moved toward virtual learning with cyber days.

CONWAY -- About two years ago, Amber Tran, 16, woke up to a snowy morning in Conway.

“My mom was like, ‘Hey, you don’t have school today’ and my friends started calling me and we met up and we just hung out for the rest of the day,” she said, recalling one of her favorite snow day memories.

But thanks -- or no thanks -- to online learning, the snow day will be obsolete.

“If I’m being honest, I’m greedy for time with my students. So while I recognize a day off in the middle of the week can be a fun surprise, I also appreciate that we can continue to deliver instruction.” Edward Dodge, parent and a teacher at Catholic High School

“You know they probably are, just because with the technology that’s available and the different platforms that schools can use now to have their classes online,” said Theresa Hall, superintendent of Catholic Schools regarding the end of the traditional snow day.

However, it does not mean the magic of a snow day is necessarily lost.

“That was something we had discussed because they do want to play in the snow,” Hall said. “It would be different doing AMI (Alternative Methods of Instruction) days, you don’t want someone sitting in front of a computer the entire time, the eight hours or whatever … The hardest part is with the little ones; you can’t do an AMI day all day. There’s more activities they might have to do, like go out and measure the snow.”

In the past couple of years, about two snow days have been built into Central Arkansas’ Catholic Schools calendar. The diocese allows schools throughout the state to decide if they need to build in snow days. For the 2020-21 school year, no snow days were built in.

While the change is linked to the COVID-19 pandemic as virtual learning is now the norm, the idea for some sort of instruction on a snow day began the 2013-14 school year with cyber days. In December through February that year, some schools had to close up to 13 days due to snow and ice. The cyber day pilot program was launched at 12 schools for at-home instruction to count toward the 178 required instruction days by the Arkansas Nonpublic School Accrediting Association. In 2015, the diocesan Catholic Schools Office released written guidelines for cyber days.

“Some of them were using a lot of technology, but some had packets of work they would send home. When we did the cyber days, we were prepared for it if there was a big chance for snow, giving them assignments for the next day,” Hall said. “Whereas now, they’re actually teaching more curriculum.”

St. Vincent de Paul principal Alice Stautzenberger in Rogers said the school was an early adopter of cyber days, or “digital days.” If snowy weather popped up in the northwest, they’d normally have no instruction and instead go to school on a holiday, like President’s Day, if the timing worked out. If a second snow day occurred, they’d switch to digital learning.

Because online learning is in place -- the school has 19 students attending virtually this year -- instruction on snow days will be easier.

“I do think that’s a positive thing that everyone is more used to that now, especially since we had not had that regularly. The last time we had one, it was a very big deal to switch to (a digital day), it caused some anxiety with some families,” she said. “... Because they’ve had to, I do think it’d be a lot easier to switch.”

Tran agreed, but added, “I like virtual a lot, but I miss my friends, being with my friends. I miss my teachers too, seeing their faces.”

Edward Dodge, a teacher at Catholic High School for Boys in Little Rock, has about 10 out of 120 students opting for full virtual learning. Two out of his three sons are also virtual learning.

“If I’m being honest, I’m greedy for time with my students. So while I recognize a day off in the middle of the week can be a fun surprise, I also appreciate that we can continue to deliver instruction,” he said of no more snow days. “Now it doesn’t have to be a video session. It doesn’t have to be video conferencing. I can adjust it to the parameters of the day. Especially as a teacher in Arkansas, I’d rather not lose that day in January or February and have to add a day in May and June.”

“I think the major cons would be the excitement of waking up and having snow and getting the day off,” she said. “As far as the continuity of learning, it’s nice not to have them … especially with kids that are struggling. I think it’s neat to have the option to pivot back and forth.”

She said educators have to be mindful of the parents’ schedules when switching to virtual learning instead of a snow day.

“If you still have to go to work and your kids have to complete school work, that is a challenge. I almost feel it’s not fair to expect all kids to have the same home life and a full day of instruction,” in place of a snow day, Stevens said. “As long as teachers and administrators were flexible with their expectations of what kids could complete independently and knowing their home situation — an older brother may be watching the younger ones — adjust your expectations for what the day would be.”

Click here to read about how Catholic schools had already moved toward virtual learning with cyber days.