Some schools reported no cases until holiday parties, dinners began 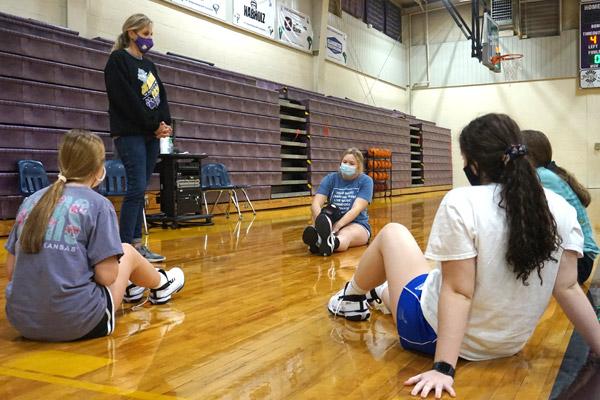 Aprille Hanson
Kay Lynn Hill, girls basketball coach at St. Joseph School in Conway, talks with her team during practice Dec. 4. Homecoming was rescheduled to Dec. 2 while the team quarantined, after a player on a team they had played tested positive for COVID-19.

Aprille Hanson
Kay Lynn Hill, girls basketball coach at St. Joseph School in Conway, talks with her team during practice Dec. 4. Homecoming was rescheduled to Dec. 2 while the team quarantined, after a player on a team they had played tested positive for COVID-19.

Most Catholic high schools in Arkansas have seen increases in COVID-19 positive cases in recent weeks. Here is a breakdown of statistics provided by the schools. The diocesan Catholic Schools Office did not require reporting cases to them at the beginning of the school year, therefore does not have consistent tracking until it began asking schools for weekly reports in mid-November.

All statistics are as of Dec. 3.

Read more about what the Catholic schools have been doing to stay safe this year:

With almost a semester of learning under their belts, students and teachers are bracing for a trend upward in COVID-19 cases.

Following the Thanksgiving holiday, several schools saw an uptick in positive cases, which is likely to continue into January following Christmas.

“What I'm seeing is there are a few more cases,” said superintendent of Catholic Schools Theresa Hall. “Not that they’re starting at our schools, but families are doing more activities in groups, which I feel is a cause for some of this growth.”

However, there have not been any schoolwide outbreaks and in-school transmissions are low, thanks to diligent efforts in mask-wearing, social distance, hand-washing and keeping groups isolated by classes or grades, Hall said. For the week of Nov. 30-Dec. 4, all Catholic schools in Arkansas reported the following to the Catholic Schools Office:

Gov. Asa Hutchinson announced new guidelines Dec. 3 stemming from recommendations from the Centers for Disease Control and Prevention regarding quarantine, which the Catholic schools will adopt. Although quarantining at home for 14 days after close contact with a person who tests positive is still labeled as the “safest” approach for those with no symptoms, it has recommended quarantine can end after day 10, returning on day 11 without testing if no symptoms have been reported. Quarantine can also end after day seven, returning on day eight, if that person tests negative and if no symptoms are reported. The two updated guidelines only apply to those with no symptoms.

While the world is anxiously waiting for a vaccine, Hall said a school requirement for a COVID-19 vaccine will be discussed.

“For immunizations, we always follow what the directives are from the Arkansas Department of Health. That might be what we do, we don’t know,” she said.

St. Joseph School in Fayetteville —  serving 319 students in the classroom and 19 online in preK3-eighth grade -- has had 16 positive cases since August, coming from 12 students and four staff members. The first positive case of the school year came Nov. 3.

“At one point when we had 16 positive people; we had one day with 95 people out, 79 quarantined,”

Principal Jason Pohlmeier said 10 of those cases came from one kindergarten classroom of 19 students. The teacher and aide tested positive Nov. 4. They switched to virtual learning Nov. 5.

“I think (the aide) started having a few minor symptoms, and she learned some people that she had been with had tested positive,” Pohlmeier said. “Then we started going through the class trying to determine who had been in close contact. Because of just the nature of kindergarten, it’s a very hands-on classroom, we couldn’t rule out any of the kids not being within 6 feet of her.”

All students are required to wear masks.

Because Pohlmeier’s son was in the class and tested positive, he and his wife and six children were quarantined. Everyone was back in the classroom by Nov. 19.

Because the Arkansas Activities Association does not require mask-wearing during games, sports teams have seen positive cases. At St. Joseph School in Conway, a player on the boys soccer team tested positive, finding out after the team had practiced in mid-November. The team was quarantined along with several others the student had contact with, with no cases transmitted from that student, said athletic director Coach Brent Bruich. The senior high girls basketball team of seven also had to be quarantined.

“We played a game against another school, and they called us the next day and told us one of their players that played in the game had tested positive for COVID, so we immediately called our nurse and school contact,” Bruich said.

Though none of their players tested positive, the Nov. 13 homecoming was pushed to Dec. 2. Bruich said when players are not physically exercising during practice or a game, they are masked and distanced.

“It’s serious because you don’t want to be the team that affects somebody else or affects one of your loved ones,” he said. “It’s hitting hard with the elderly and those with underlying conditions. We’re trying to be really responsible as far as that, while diligently wiping down bleachers and sanitizing equipment.”

Like several schools, Catholic High School in Little Rock alerts parents when a student or staff member tests positive for COVID-19. Rebecca McWilliams, CHS health coordinator, said, “Parents entrust us with their kids' safety in a number of ways, and their health is one part of it.”

McWilliams admitted it’s harder to control what goes on outside of a high school, with teenagers having freedom to drive and meet friends or work (see sidebar, page x).

“These next few weeks I’m a little on edge honestly,” as cases could still pop up from Thanksgiving gatherings, she said.

Kristy Dunn, principal at St. Theresa School in Little Rock, serving preK3-eighth grade, has had one positive case, with no in-school transmission, since August, out of the 217 students. It adopted a hybrid schedule, with 12 students full-time online. The school switched to virtual learning ahead of Thanksgiving break, because five out of 12 homeroom teachers were absent, two from quarantining. Looking toward January, Dunn said they are surveying parents about their feelings on current policies and what to do going forward.

“Everybody’s hope is to go back to normal, but that’s not realistic right now. I don’t think it's realistic even in August next year,” Dunn said, believing certain policies like mask-wearing will still be in place.

Dunn said for now, she’s “immersed in Advent and immersed in this spark of light in the darkness, so to speak. It feels like a manageable time these three weeks before Christmas.”

Kay Williams, school nurse and health and religion teacher at Trinity Junior High School in Fort Smith, said out of its 212 students, five students have tested positive this school year.

“That made a difference in one of the people being positive because we weren’t in school,” Williams said, allowing that student to immediately quarantine and not be on campus.

Beyond the typical safety protocols, Williams said the parents have been understanding and willing to keep their students at home or pick them up from school, even if the sickness is likely not COVID-19.

“Be diligent in not allowing the illness into the building,” Williams said of her advice for other schools.

Williams anticipates an uptick after Christmas as families may “bend the rules” on CDC guidelines. But it’s important to be vigilant, she said.

Most Catholic high schools in Arkansas have seen increases in COVID-19 positive cases in recent weeks. Here is a breakdown of statistics provided by the schools. The diocesan Catholic Schools Office did not require reporting cases to them at the beginning of the school year, therefore does not have consistent tracking until it began asking schools for weekly reports in mid-November.

All statistics are as of Dec. 3.

Read more about what the Catholic schools have been doing to stay safe this year: