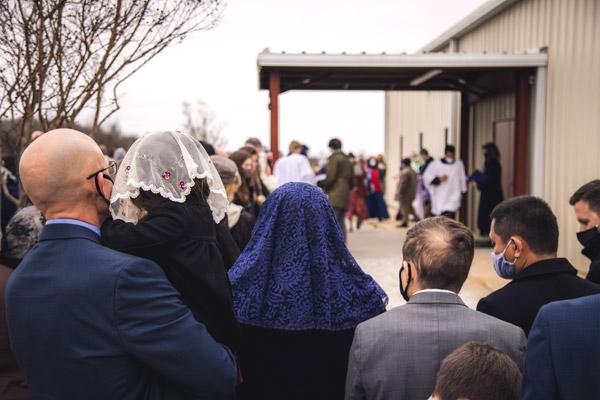 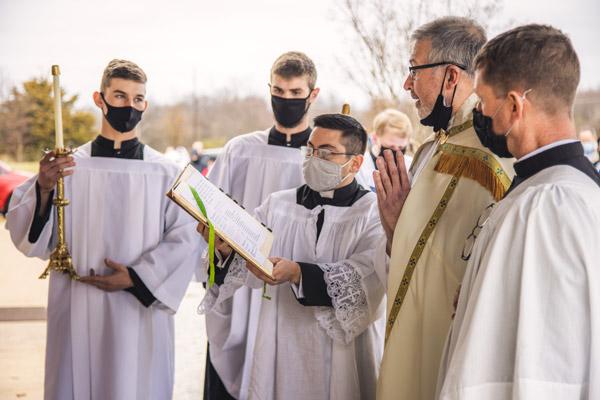 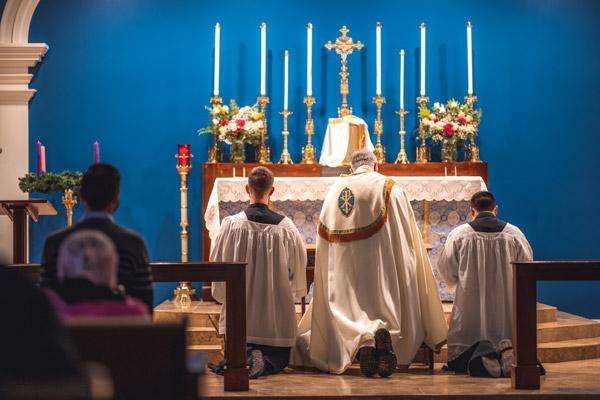 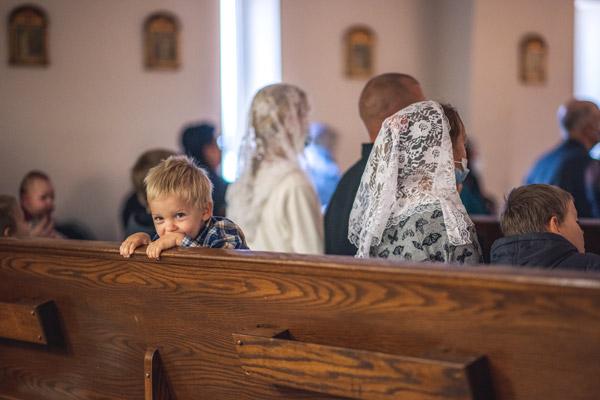 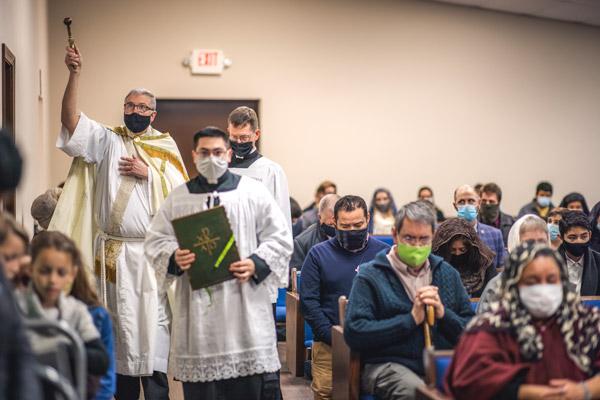 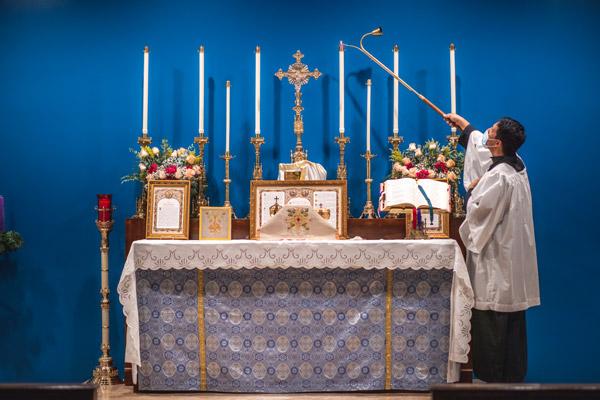 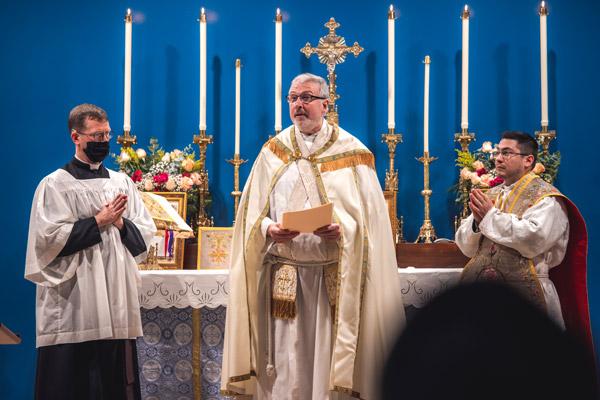 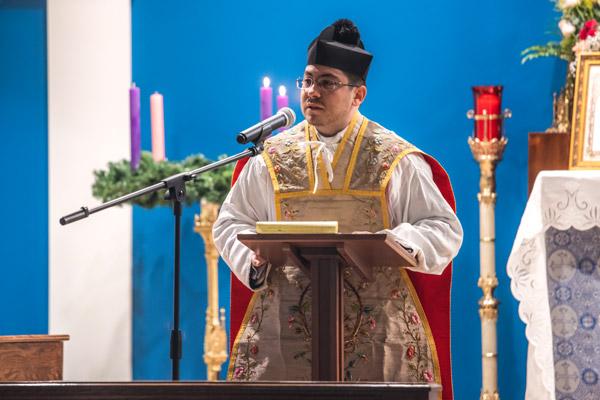 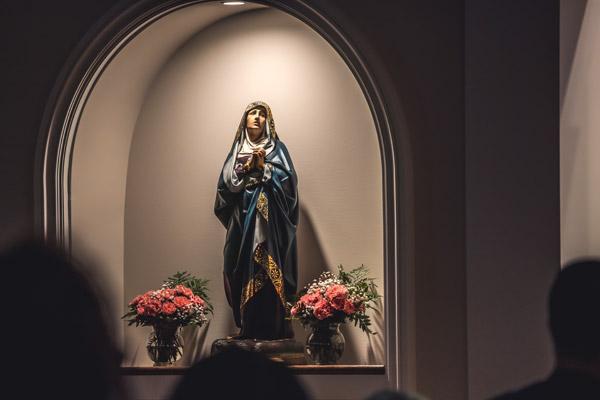 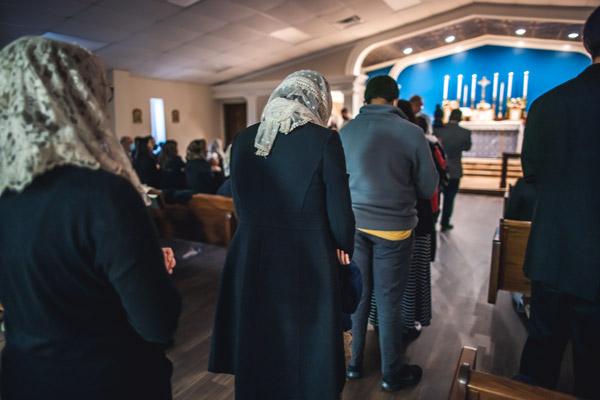 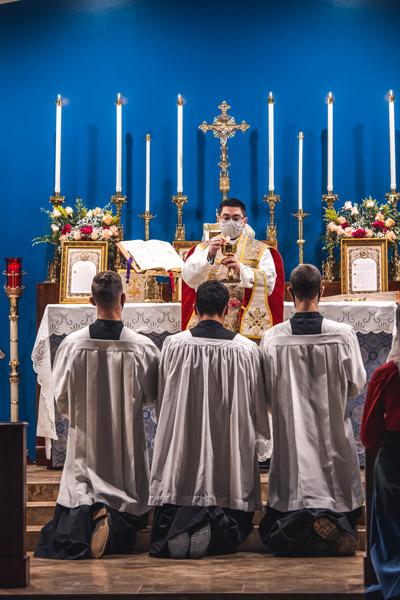 Travis McAfee
Father Joshua Passo, FSSP, elevates the Eucharist during the Dec. 12 Mass dedicating Our Lady of Sorrows as a new parish for the Diocese of Little Rock in Springdale.

Travis McAfee
Father Joshua Passo, FSSP, elevates the Eucharist during the Dec. 12 Mass dedicating Our Lady of Sorrows as a new parish for the Diocese of Little Rock in Springdale.

SPRINGDALE – The Latin Mass community in Northwest Arkansas now has its own home. The newly established parish of Our Lady of Sorrows celebrated its first Mass on the feast of Our Lady of Guadalupe Dec. 12 in Springdale.

The apostolate of the Priestly Fraternity of St. Peter will oversee the parish as well as St. John the Baptist Church in Cabot. All Masses are in Latin and follow the Extraordinary Form of the Roman Rite.

Around 190 congregants attended the church blessing and the votive Mass that followed.

In spite of freezing temperatures, parishioners watched as vicar general Father John Connell, also of Springdale, walked around the building with Father Joshua Passo, FSSP, and altar servers, blessing, singing Psalms and sprinkling all four corners of the church with holy water.

Father Passo, a member of the Priestly Fraternity of St. Peter who is also the associate pastor at St. John the Baptist Parish in Cabot, spoke during the Mass of the hard work and sacrifice of the parishioners and others who had helped make the dream of a Latin Mass community in northwest Arkansas a reality.

“I am most humbled by the fruits of your labor and dedicate the labors of my priesthood,” said Father Passo, as he thanked the congregants, other priests present and Bishop Anthony B. Taylor. “How fitting in dedicating the parish to Our Lady of Sorrows, as Our Lady will teach us how to suffer and how to love her son. We start a new family as a parish, a new spiritual family and a community trying to love God, to go to heaven and to be sanctified.”

Father Connell served as the bishop’s delegate for the blessing and read the decree establishing the church as a parish. Bishop Taylor was unable to attend because he was in isolation after contracting COVID-19.

“The Latin community has grown since my arrival here in northwest Arkansas in 2009,” said Father Connell after the Mass. “I am very happy that I was able to work with them and to see them become their own parish today.”

The church, at 1600 W. Graham Road in Springdale, is centrally located for surrounding communities and convenient to the I-49 bypass. Formerly, the 5,000-square-foot metal building functioned as a Lutheran church that was looking to downsize. The community was able to buy the church, complete with a steeple and pews, another small building that will function as a rectory and nine acres of property for $750,000. The altar is flanked by two niches, with statues of Our Lady of Sorrows on one side and St. Joseph on the other, and is separated by a Communion rail.

The Latin Mass community in the area had its beginnings with a few parishioners at St. Joseph Church in Tontitown. The late Father Greg Hart began celebrating the Latin Mass for a small group in 2011. Beginning in 2017, priests of the Priestly Fraternity of St. Peter from the Most Precious Blood Parish in Tulsa began traveling to Tontitown to celebrate a Latin Mass on Sunday at 4:30 p.m. As the community grew, it became possible to move forward in establishing a parish. With the bishop’s permission, they began to look for their own property.

Father Paul Jared McCambridge, also a member of the Priestly Fraternity of St. Peter and pastor of St. John the Baptist in Cabot, was given oversight for the congregation.

“They had begun their work before I began serving as a pastor for them in June of 2020,” Father McCambridge said. “In order to meet their needs, both Bishop Taylor and my superiors believed it seemed fit that a priest and parish would benefit all involved. So once there was assurance that the congregation could raise funds and acquire the building, the timing seemed right for establishing a parish.”

Parishioner Marie Nowak began attending the Latin Mass in March. Her family moved from Minnesota four years ago and was a member of St. Bernard Church in Bella Vista.

“We were drawn to the reverent community, the tradition and the large families we met here,” said Nowak, mother of 10.

Becky Guy said she and her husband Chris were on a date night and attended the Latin Mass last spring and were drawn to the traditional Mass.

“We began bringing the kids and coming more to the Latin Mass a couple of months ago,” she said.

The Fakult family joined the Latin Mass community in 2011. Their two boys, Matthew and Andrew, were altar servers at St. Joseph for almost a decade and fittingly served at the first Mass for Our Lady of Sorrows.

“What drew us to the Mass is that it is holy,” Mike Fakult said. “The Latin Mass sanctifies us as parishioners and a community, but it also sanctifies the whole area for the parish to be established.”

Michael Gray, a convert to the faith, began attending the Latin Mass in 2013.

“We have seen a lot of young families and a significant number of Hispanic families begin to attend the Latin Mass,” he said.

Gray was a member of the building committee that began looking for property and helped spearhead pledge drives.

“People responded well to the pledge drives,” Gray said. “We did a generic drive for (the) property, with Fraternity support and the bishop’s support, from 2017-2018. The second pledge drive had more focus and identified a timeline for establishing the parish. Both drives exceeded our expectations with contributors from several parishes and individuals interested in seeing the church be established. We closed on April 30, the feast day of St. Catherine of Sienna, and we had funds to begin the remodeling project, which has been all from donations.”

Members of the community suggested naming the parish for Our Lady of Sorrows, and Bishop Taylor agreed.

Father McCambridge said Our Lady of Sorrows will begin a gradual transition to establish fulltime parish life with a regular Mass schedule and a pastor from the Priestly Fraternity of St. Peter assigned there. Currently, Father McCambridge serves as the administrator and Father Passo serves as the assistant administrator, with the intention of Father Passo moving to Springdale and assuming more responsibility.

Father McCambridge said attendance in Cabot and Tontitown has grown over the years. Families registered in the Springdale parish have increased from 35 to about 55 in the past six months, totaling about 190 parishioners.

“Part of it is a desire that Catholics have to get a taste or sense of the ancient traditional practice of the Church,” he said.

Parish erected in Cabot on feast of St. John the Baptist

Latin Mass Community to be elevated to parish status