To receive gifts of grace, we must 'feel small, poor and humble' like those at nativity 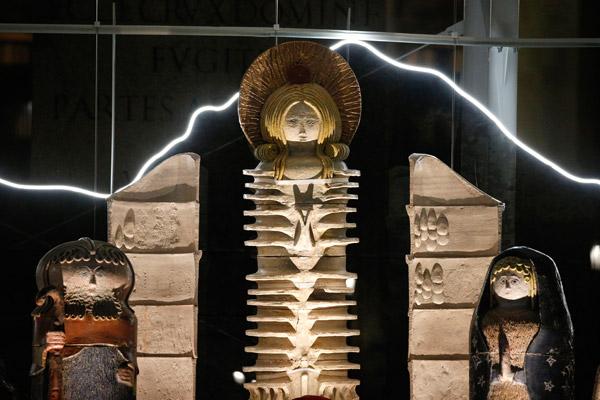 CNS / Paul Haring
Figures of Joseph, an angel and Mary are pictured in the Nativity scene in St. Peter's Square at the Vatican Dec. 14.

CNS / Paul Haring
Figures of Joseph, an angel and Mary are pictured in the Nativity scene in St. Peter's Square at the Vatican Dec. 14.

VATICAN CITY  -- The image of baby Jesus nestled in the manger is a much-needed reminder during the pandemic that God gives the world the gift of hope in troubled times, Pope Francis said.

Meeting with delegations from Castelli in Italy's Abruzzo region and from Kocevje, Slovenia -- responsible, respectively, for the Nativity scene and Christmas tree in St. Peter's Square -- the pope said that Christmas "reminds us that Jesus is our peace, our joy, our strength, our comfort."

"But, to receive these gifts of grace, we need to feel small, poor and humble like the characters of the Nativity scene. Even in this Christmas, amid the suffering of the pandemic, Jesus -- small and defenseless -- is the 'sign' that God gives to the world," he said Dec. 11.

The Nativity scene featured several life-sized ceramic statues in a contemporary art style that "has its roots in the traditional working of Castelli's ceramics," said a statement from the commission.

The controversial scene was made by students at a high school specializing in art; the pieces on display at the Vatican are among the 54 pieces students created over a 10-year period beginning in 1965. The town of Castelli, in the mountains of Italy's Abruzzo region, had a world-famous, thriving ceramics industry since the 17th century, but the art -- and the town -- was dying out. The school was part of an effort to revive the industry and modernize it.

The human figures in the Nativity scene are made of rings of ceramic stacked on top of each other. They are cylindrical, not curvy like a natural human form. And the presence of an astronaut and a knight carries the whole thing to another level of untraditional.

"This is not the sweet, warm nostalgia that Christmas usually generates," said Msgr. Timothy Verdon, director of the office of sacred art for the Archdiocese of Florence, Italy, and director of the Florence cathedral's museum. "But even in this intimate area of our religious lives, we have to grow in unexpected ways."

As for adding the astronaut, the monsignor said that definitely is part of tradition. "In Naples, they add political figures, pop stars and, this year, (Diego) Maradona," the soccer star who died in late November. "Not only shepherds and kings go to the manger, but all humanity makes that pilgrimage in one way or another."

"But maybe especially this year when the celebration of Christmas is going to be so poor in tradition, when many people will be unable to do the beautiful, warm, tender things" they are used to associating with Christmas, they might not need such a challenging Nativity scene, he said.

And, at least judging from the social media reaction, they did not welcome it.

The vehemence of the reaction may be attributable to "a widespread idea that a lot is going on in the world that is not being explained to us -- a maniacal universal plot to deprive humanity of values and traditions," Msgr. Verdon said. And even if one does not buy into such a conspiracy theory, "everyone is at the limit of his or her patience, so something like the creche in St. Peter's Square becomes bigger than it should be."

The Christmas tree in St. Peter's Square was a 98-foot-tall red spruce tree, which hails from one of the "most intact" forest reserves in Slovenia, the statement added.

Thanking the delegations for their gifts, the pope said that "this year, more than ever, they are a sign of hope for the Roman people and for those pilgrims who will have the opportunity to come and admire them."

Both the tree and the Nativity scene, Pope Francis said, create "a favorable Christmas atmosphere" that helps Christians "live the mystery of the Redeemer's birth with faith."

"In the creche, everything speaks of the 'good' poverty, the evangelical poverty, that makes us blessed," he said. "By contemplating the Holy Family and the various characters, we are attracted by their disarming humility."