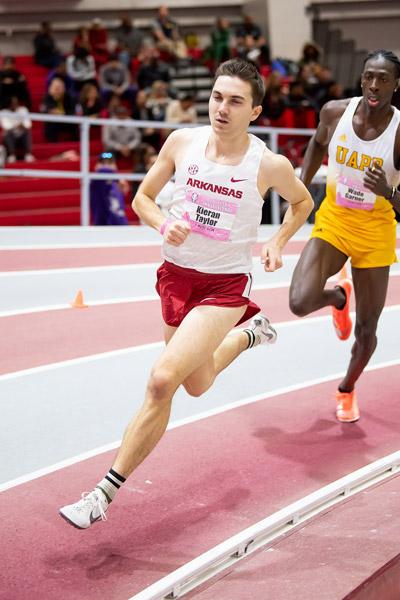 Courtesy University of Arkansas Athletic Department
Catholic High grad Kieran Taylor shifts into high gear and heads for the finish during the Tyson Invitational Feb. 14. Taylor is the leading 800m runner for the Hogs this season.

Courtesy University of Arkansas Athletic Department
Catholic High grad Kieran Taylor shifts into high gear and heads for the finish during the Tyson Invitational Feb. 14. Taylor is the leading 800m runner for the Hogs this season.

Kieran Taylor can tell you the precise moment he was all-in for running. The Wabbit, Rocket and now Razorback middle distancer had only been competing for three years, taking up the sport at Our Lady of Holy Souls School in Little Rock in sixth grade, but he knew.

"I remember going into freshman year of high school, I dropped soccer to really try to excel at running,” he said. “With soccer, the team that I was on and the rival we always played against conjoined, and I thought that I didn’t want to play with that team. I was doing really well with running and I was really enjoying that. And, my brother was also doing really well at the time, so I decided to drop soccer and go with running.”

In hindsight, the decision was as obvious as tying one’s spikes. Taylor, 23, would go on to solidify himself as one of the best runners Catholic High School ever had, which is saying something considering the considerable exploits of his older brother and fellow collegian Brendan. But unlike his brother, who ran for the University of Oklahoma, Kieran was headed for the Hill, a turn that resumed a legacy forged by his mother and father, former Hogs Gary and Erin Taylor. To say nothing of joining one of the elite collegiate track and field programs in the nation.

Taylor brought with him an impressive high school resumé, including a cross-country state gold and 800m state and Meet of Champions wins his senior year, with a state record 800m time of 1:54.20 to boot. But at Fayetteville, he was just another freshman.

“It was definitely a shock to the system,” he said. “I think the biggest advantage for me was my dad having the wherewithal to email and talk to coaches, rather than have them just reach out to you. I think that was a massive, massive advantage.”

“Not only that, but (Brendan) had gone through the process before of adjusting in college. I give a lot of credit to him with helping me out, especially the first year or two of my college career.”

Taylor redshirted his freshman year, a year he spent honing his training and learning everything he could about competing at the highest level.

Taylor kept his head down and his mouth shut and beginning in Year Two began to build his college record. He competed in six outdoor and seven indoor meets, posting a career-best 1:50.35 at the SEC Indoor Championships, placing sixth. He followed that up with 13 starts the next year, winning four times and posting 1:48.06 at 800m, a distance he’d been perfecting since high school.

“There’s a very fine line between finding a distance that you’re good at and finding what you like,” he said. “Going through high school, I could have been better at the mile, but I really enjoyed the 800m. That was something that I just liked to do, and I had a little bit more natural speed than my brother did and maybe than my dad did, even. I was passionate about it and I was good enough at it; it allowed me to excel in that event.”

Last season was a mixed bag that included a sixth-place finish at 800m and silver distance relay medal at SEC Indoors, as well as the onset of COVID-19 canceling the second half of the year, including the NCAA Indoor Championships.

“When it first started making headlines, we were actually at indoor nationals,” he said. “It was our second day there, and we were racing the next day. We got done warming up and we were competing in 12 or 18 hours or so. Then we all saw the tweet from the NCAA that the indoor national championships were canceled. It was crazy because, at the time, there were only about 30 cases in the U.S.”

“It’s kind of frustrating, but you understand. Athletes were under fire for a long time because people thought we were being selfish, it’s just a sport. What they don’t see is that we’ve been training since August or even before for most of us. You’re at nationals and it’s your last chance, your last go around. You assume the risk of the virus.”

As he faces the final lap of his collegiate career, Taylor finds himself at the top of the Hogs’ heap at his distance, meaning he’s the man to watch in every meet he runs. He’d like to go out with a bang, then take a shot at qualifying for the Olympics, which could lead to a gig running professionally. Whatever happens, he’s grateful for the chance to compete and be a role model to athletes at his middle and high school alma maters, never running so fast that he doesn’t notice who and what surrounds him.

“If you told me in high school that I was going to be a two-time All-America or scoring at every single SEC Championship I’ve been to, I’d probably call you a liar,” he said. “If you’d told high school me that I was going to be flying on planes out to California and getting all this free gear and running a 1:48.00 out there, yeah, I wouldn’t believe you. It’s actually been more than I could have ever dreamed.”